Full disclosure: This is my first ever Animal Crossing game. Somehow previous titles have flown under my radar. Quarantined within a fairly small flat with a health pandemic circling the globe and many economies in free-fall, the carefree socialisation and mingling in the Animal Crossing: New Horizons trailers looked massively appealing.

Animal Crossing: New Horizons is like a tiny ray of sunshine peeking through ever-darkening clouds. On your not-quite-deserted island nothing can (seriously) hurt you, and the only bugs you can catch are those which are too slow for your net. You don’t need to get into arguments about who is in charge or worry about where your next pay cheque is going to come from. Animal Crossing: New Horizons is exactly what isolated, confined, frightened people need right now. It’s quite lovely. 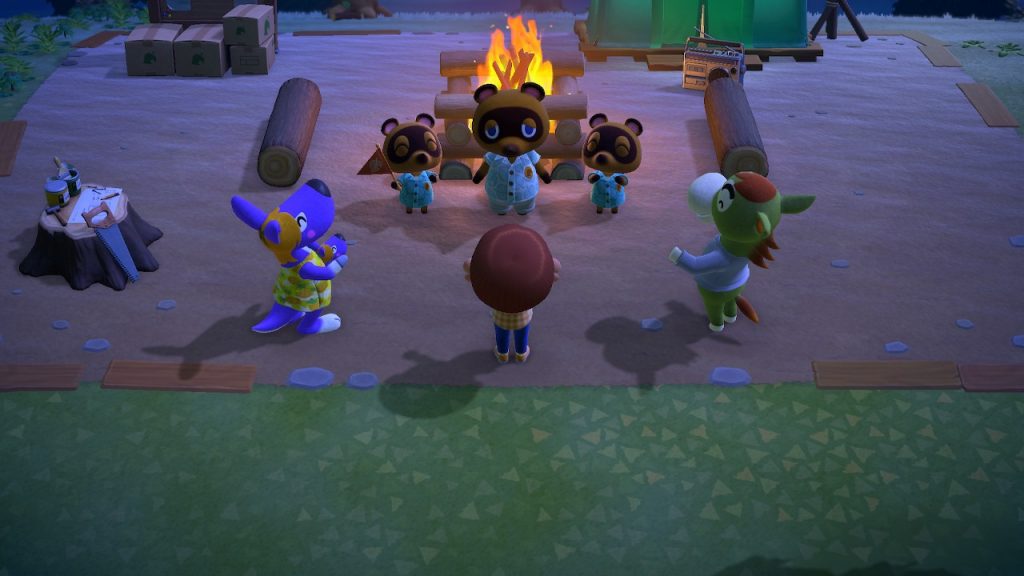 The fellowship prepares to set forth.

The core gameplay of Animal Crossing: New Horizons is pretty simple. Rascally raccoon Tom Nook has invited you and a couple of animals to be part of a desert island commune. After you suggest a particularly neat name for your town Nook declares you village representative, and it soon falls to you to help to expand the local facilities. This can mean gathering resources with which to build a museum, beautifying the island by digging up weeds and moving trees and flowers or even deciding upon the placement of houses and bridges. 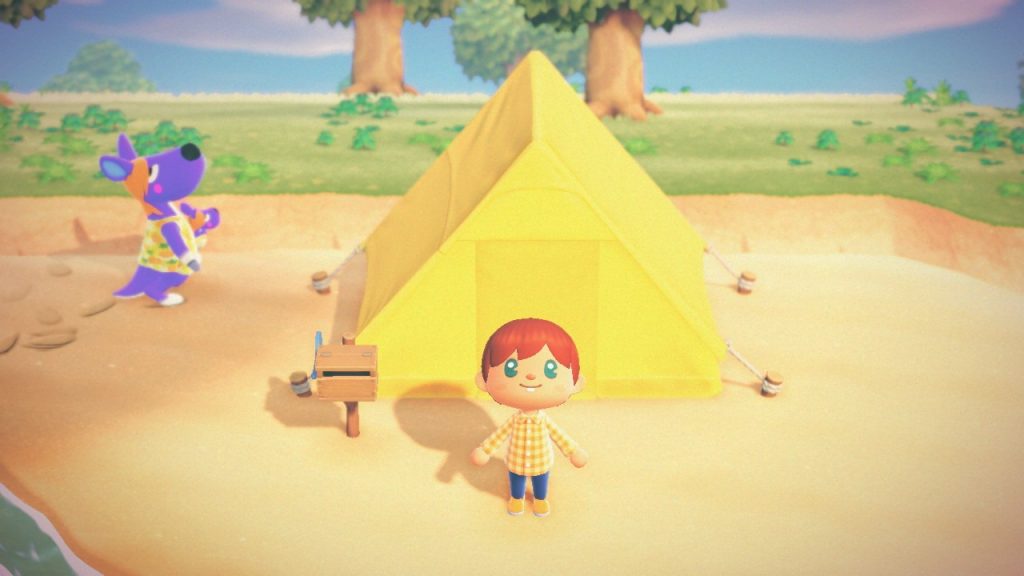 There are initially two forms of currency in Animal Crossing: New Horizons. Bells and Nook Miles. Bells are used to make immediate purchases and pay off your mortgage, whereas Nook Miles can be used for special purchases such as new D.I.Y recipes or tickets to other deserted islands. You can obtain bells by selling things you have crafted to Nook’s fellow employees, Timmy and Tommy. Nook Miles are initially far more precious and are obtained just by doing stuff on the island. There are loads of secret quests which award Nook Miles. Tom Nook provides you with a phone at the start of the game, and each time you complete a quest you get a little notification, telling a bump of endorphins to flood your brain. Essentially these are micro-transaction mechanics without the credit card. 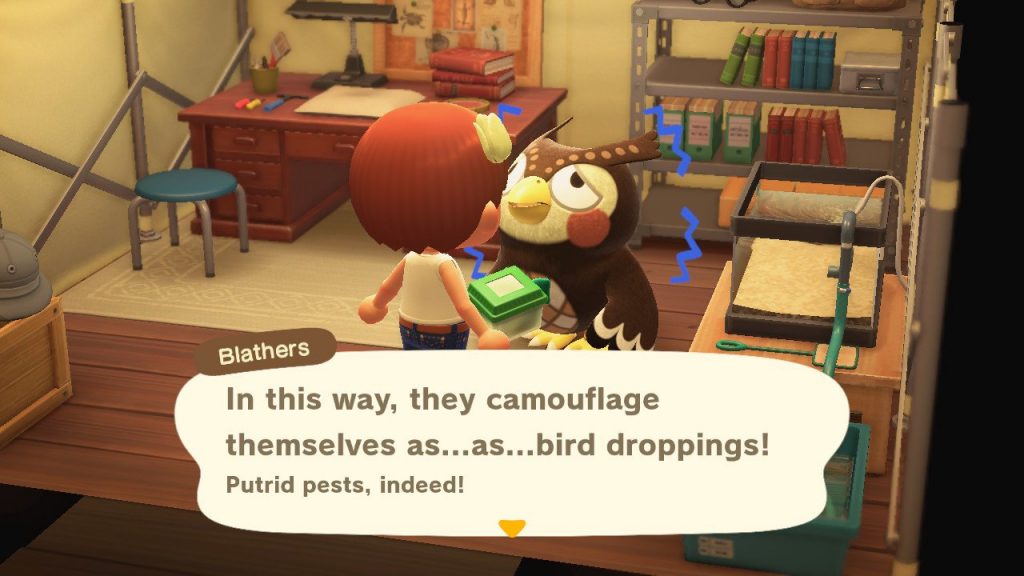 As mentioned previously, Nook Miles are exciting because they are your means to visit other deserted islands via the local airport. These islands offer opportunities to come across potential new residents or gather precious resources which cannot be found at home. Fruit which is not native to your homeland sells at five times the price in the shop. You can even re-locate entire trees if you want to change the flora of your island.

Animal Crossing: New Horizons cannot be “finished” in one day. Nintendo matches the in-game time of day and date to that of your Switch console, and sometimes you can only do so much before calling it a night. Fruit trees take several days to grow. The clothing that you order at the online shop comes the following day. New buildings don’t pop up as soon as you find a location for them. This nudges the player to go against their instinct to keep playing until their eyeballs droop onto their cheeks, although you can do so if you wish by carrying out non-essential jobs, earning Nook Miles and working to pay off your mortgage. It is possible to manipulate the in-game clock by changing the date on your Switch but I advise against this. Animal Crossing should unfold gently, and winding the clock forwards could ruin some of the seasonal events Nintendo has in store. 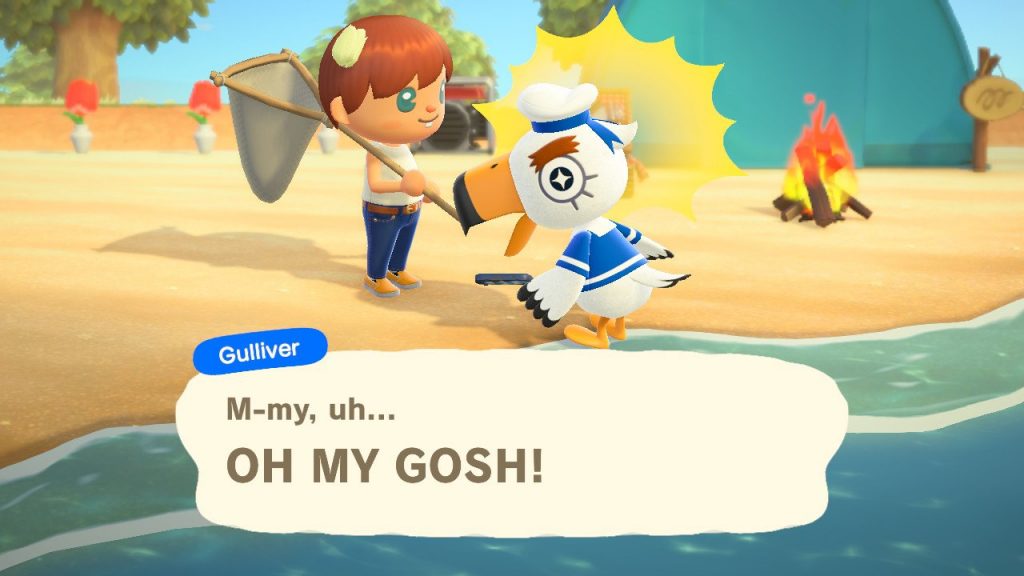 Gulliver averts his eyes from my hideous vest.

Each day Tom Nook, Timmy and Tommy serve as your taskmasters. Over time the entrepreneurial Nook offers you opportunities to build up more debt, and his economic model seems a bit shady to say the least. Especially given the little golf set-up in his office, and the fact that you’re the only one who seems to be doing anything meaningful.

There are loads of animal pals to come across and convince to join you. Over time they might choose to leave your island and go elsewhere, and you can go out in search of new residents. There are nearly 400 animals to come across, although there are actually only 8 personality types. Therefore which animals you ask to join you is more about which ones you like the look of most. You can build relationships with them by engaging in dialogue and helping them with quests. Sometimes they’ll give you a present just for being around. It’s really charming. 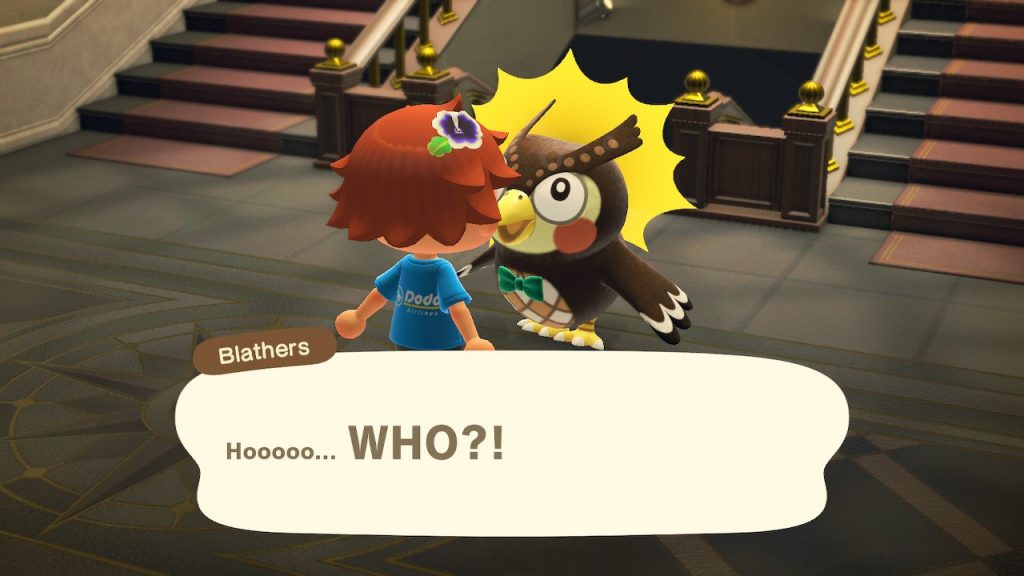 I do have some gripes, most of which are minor. Unfortunately repetitive dialogue when carrying out the same task over and over can get pretty frustrating and the text doesn’t change quite fast enough. The inventory management system is also a little lacking. Your pockets will fill up really fast, and when they are full you get an irritating pop-up saying you have no room remaining and would you like to swap the item you have picked up with something in your inventory. Avoiding this means constantly checking your pockets and dropping things you don’t need.

When selling items in the shop there is no itemised list showing the price you can get for each item. Stacked items can’t be split within the store interface so you have to leave the shop and remove items from the stack one by one while in your inventory. Another frustration is tool durability. Your tools will break after repeated uses, and this means you can be caught short at inopportune times. It’s not clear what durability is remaining on the tool you are using, so you might prefer to waste an inventory slot on a spare. Not ideal.

A more major issue is that you are limited to one island per console, and apparently only the person who set up the island can make plot progress (though I haven’t verified this myself). I’m also concerned that save data is currently not uploaded to the Nintendo Online cloud save system, which is problematic considering how much work people will be putting into their island. 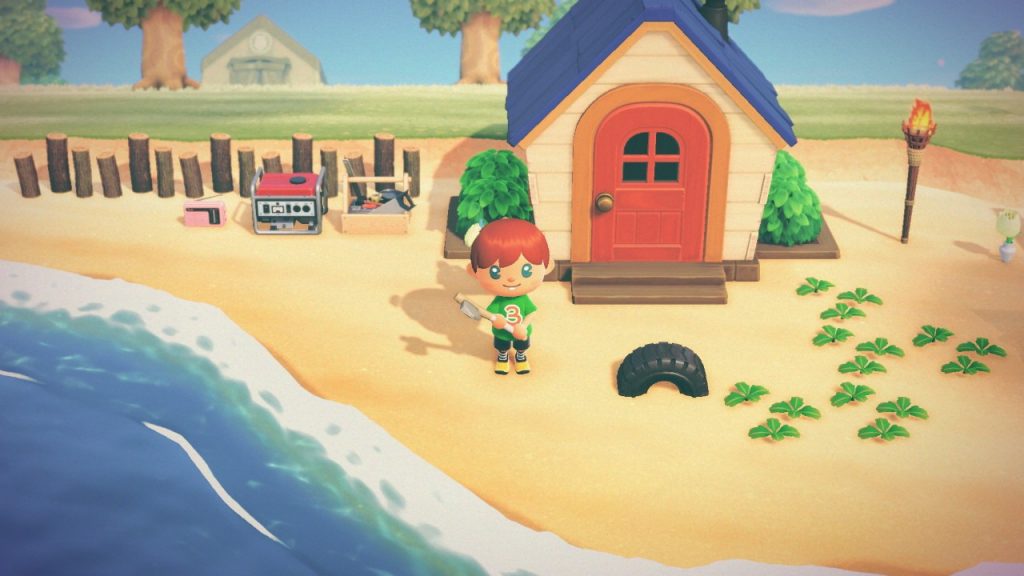 Yeah, I have a beach-side property…

Multiplayer in Animal Crossing: New Horizons is largely pretty good but there are some frustrations. You can visit the airport to generate a limited time Dodo code which you can then give to others. They can then visit their airport and come to your island.  I had dreams of visiting strangers’ islands via the Dodo code system so I searched Reddit for recently uploaded codes. Unfortunately there are some strange design choices here. Every time someone arrives or leaves the island a notification and lengthy loading screen pops up. For everyone on the island, including visitors. This makes using a code which has been shared with lots of other people really frustrating. You can’t use a Dodo code while the player you are connecting to has their in-game smartphone open. I feel it would be better to allow people to drop in and out without stopping everyone else in their tracks. 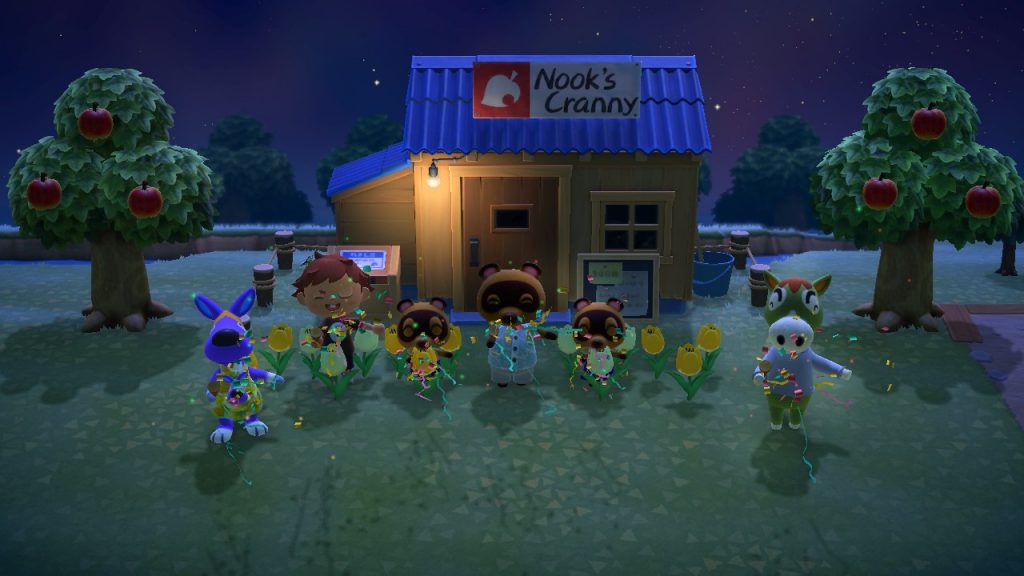 You can take part in ceremonies to celebrate new features on the island. Aww.

The online co-op mode otherwise works really well. You can invite someone to your island to have a look around, while limiting their use of destructive tools. If you want to let someone come over and mess up your island you can designate them as a “best friend”, allowing them to use their shovels and axes to start changing the landscape. Early on in the game there isn’t loads to do, although you can catch fish and bugs and shift plants around to your heart’s extent.

You can even message your friends (and indeed the animals on your island) and send them gifts. Given that people will come across different items in the shops this is a really nice feature. I sent my musician friend a guitar effects pedal-board which showed up one day. You can also play co-op locally if you want to, with players being tethered to a designated leader. Some may prefer a split-screen set up but the leader can be changed on the fly which is a really nice idea, especially if you have kids who each want to have a go at being in charge. 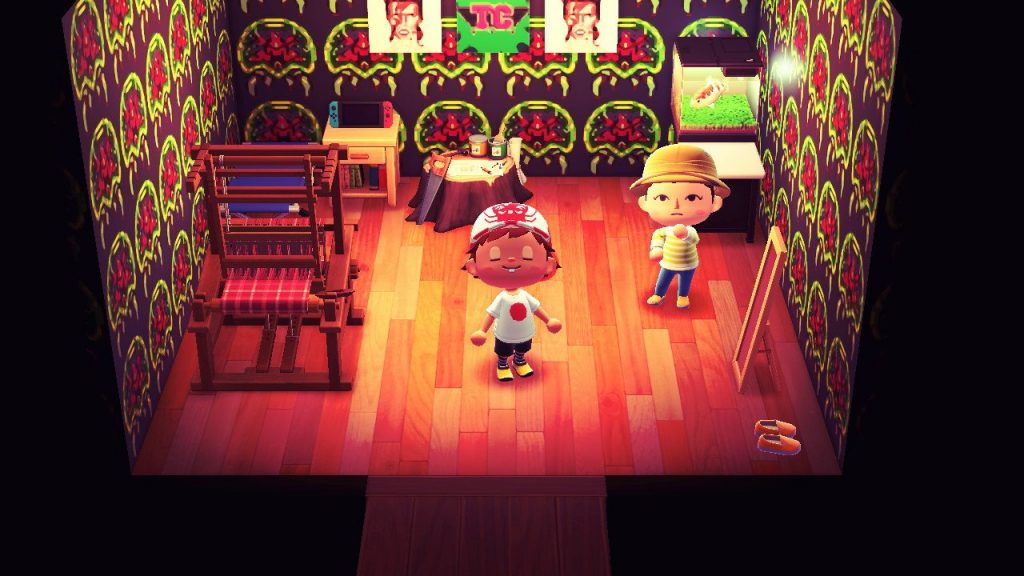 Yeah, I may have gotten carried away with the customisation…

Animal Crossing: New Horizons is lovely to look at. Lighting shifts subtly over the course of the day. Leaves on the trees rustle in the breeze. Rain pitter-patters on glistening meadows. The water ripples and gleams. Seeing the island change on a daily basis, from flowers popping up to tents becoming houses, is an absolute joy.

Each pal you recruit to your island is beautifully designed, with an almost fuzzy felt-effect on their fur and feathers. Animals punctuate their conversations with a range of cartoonishly adorable expressions. I particularly loved museum curator Blathers the Owl, who trembles and sweats as he talks about the creepy bugs living on the island. 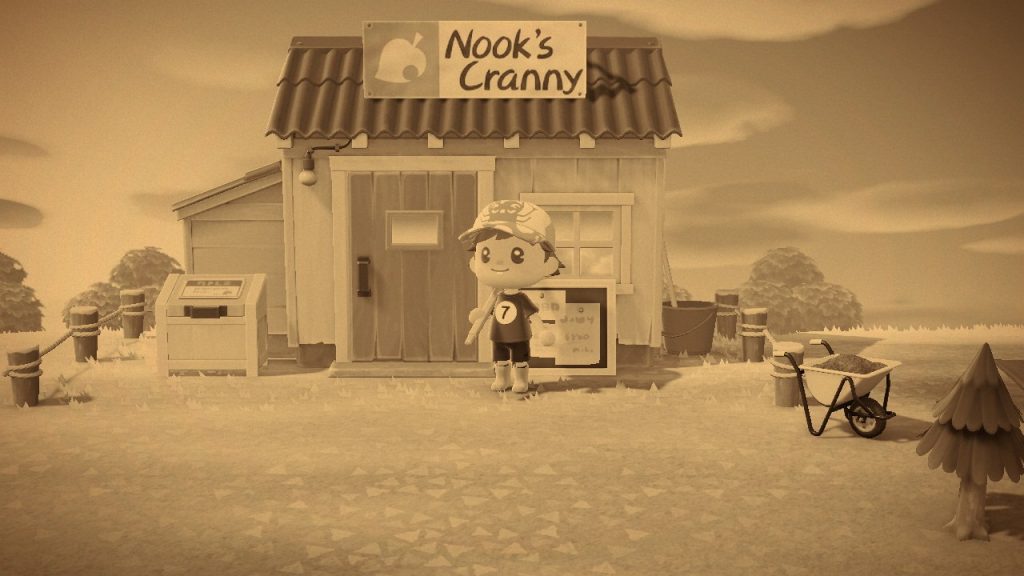 You can apply cool Insta-style filters to the photos you take in-game.

The range of items available to you to decorate your island is absolutely huge. Wrestling figurines, lava lamps, jukeboxes… there’s so much to find and play around with. You can even create your own designs or pull creations from previous Animal Crossing titles using QR codes. The customisation possibilities are insane. No two islands will look the same, which makes the prospect of visiting someone else all the more exciting.

Music in Animal Crossing: New Horizons is perfect. The island theme is repetitive but it’s so relaxed and beautiful it never grates. I particularly love the music which accompanies your night-time trips to islands which can only be visited with Nook Miles tickets.

My only criticism of the music is that the canned music output by radios/jukeboxes etc. is uniformly awful. Presumably this is intentional, but it’d be nice to have a choice of high-quality tunes to soundtrack your time spent at home.

The animals speak with something approaching garbled human voices which have been sped up. They sound pretty cute, although I wonder why Nintendo chose not to use sounds which were closer to the noises the animal’s real-life counterparts would make. 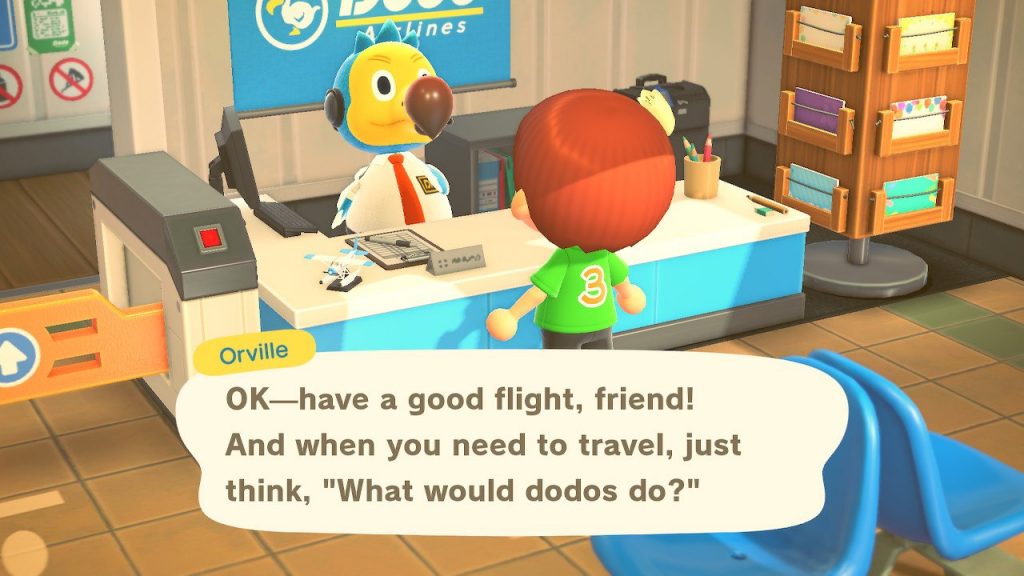 The airport is sometimes frustrating to use, but it’s far easier than flying in real life.

Animal Crossing is an evergreen title, with new bugs and fish popping up as the seasons change. In Autumn leaves turn brown and fall from the trees, and we might well see snow in the Winter. It might sound sad, but I can’t wait to load up the game on Christmas day and revel in the festivities. 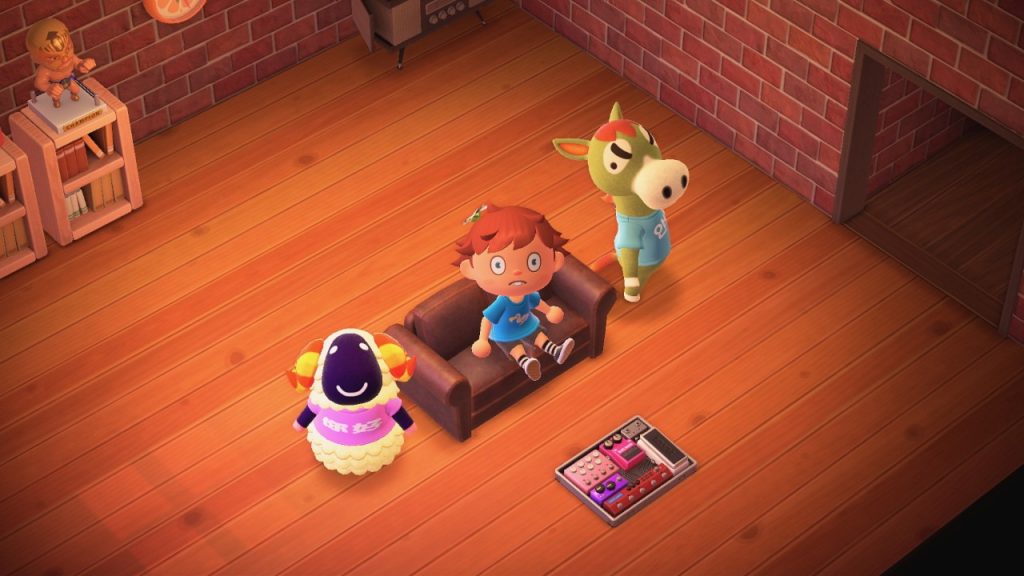 Nintendo are on a hot streak with Switch iterations of their flagship series’, with Zelda: Breath of the Wild, Fire Emblem: Three Houses and Luigi’s Mansion 3 all arguably being high-points for each series. They have pulled out all the stops with Animal Crossing too. There are surprises around every corner, and just when you think you know exactly what to expect something you’ll receive a new quest which greatly expands your abilities. The challenge might be limited, but having so much freedom to craft your own village is pretty great. Stay home and hang out with some animals, you won’t regret it.

I give it the Thumb Culture Gold Award.

Animal Crossing has been the talk of the town since lockdown. It has brought ...

Animal Crossing Pocket Camp is arriving onto iOS and Android devices this week on ...