I was lucky enough to have an early access copy of 2084 from Feardemic which is currently available on Steam.  I had not played their previous title The Padre but I was keen to see what the game had in store. It’s a cyberpunk FPS with some interesting looking hacking mechanics that can be used throughout the game – but how different are they to what is already out there? 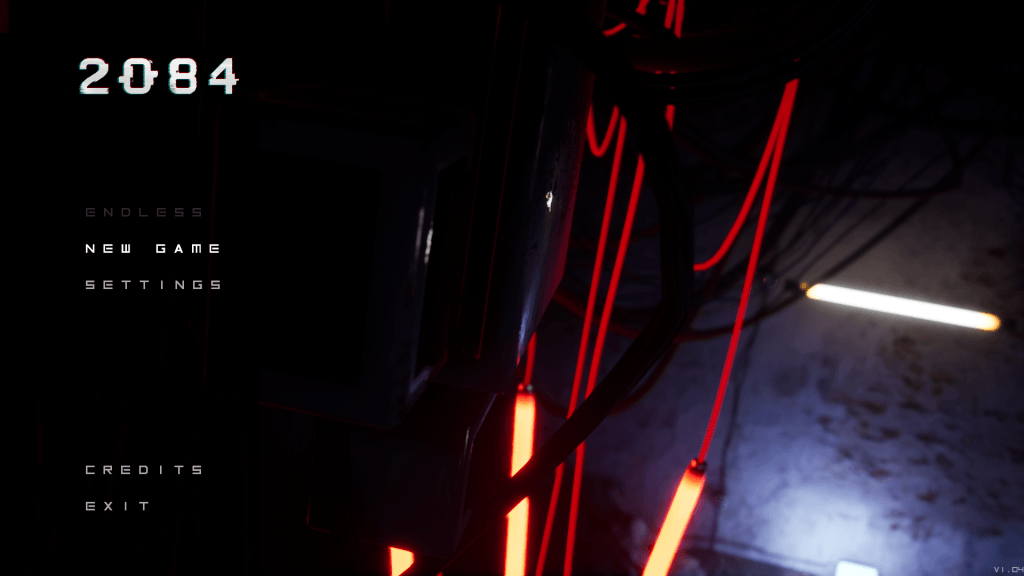 The Main menu of 2084 before enabling Endless mode

When loading 2084, you are only presented with a ‘New Game’ option.  Upon starting the game, you are then brought to a tutorial where you are taught the controls and learn how to jump, shoot and throw grenades.

One of the promoted aspects of the game is the hacking mechanics. The tutorial showed how to hack but it wasn’t as straightforward as I expected it to be (but perhaps that’s the nature of hacking?).  By clicking the right mouse button on a highlighted panel, you initiate the hacking sequence however it did take me awhile to figure out that the arrows on screen was Left, Right, Up and Down. Matching that with WASD I figured out how to hack the panels.

Once you have completed the tutorial you can then continue the game and there is a popup message informing you that the endless mode is unlocked. 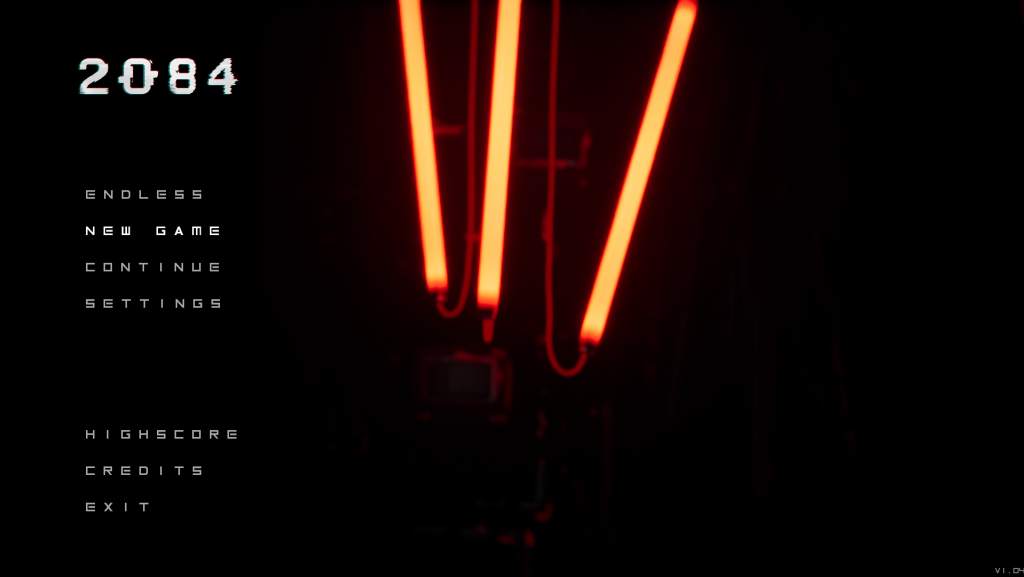 The Main menu once opening endless mode after completing the tutorial

Without spoiling too much, you enter the first level and this is where it gets interesting as I found I had no clue why I was there or what I was doing.  I was dropped straight into a basement of sorts and had to figure out what to do. I thought it was odd and once I finally completed that level, I was presented with a cut scene.  Again, the game didn’t really tell me what was going on and then I was dropped into an apartment complex. This happened another 2 times without really knowing the story or even the purpose of what was happening.  Maybe you find out in the end?

All I could really tell from the 2084 is that you shoot the enemies, reload your gun (or try to find ammo as it can run out quite easily) and work your way through a maze.  It was very “hoard mode” so to speak; like something which you would find in a Gears of War game but within corridors. 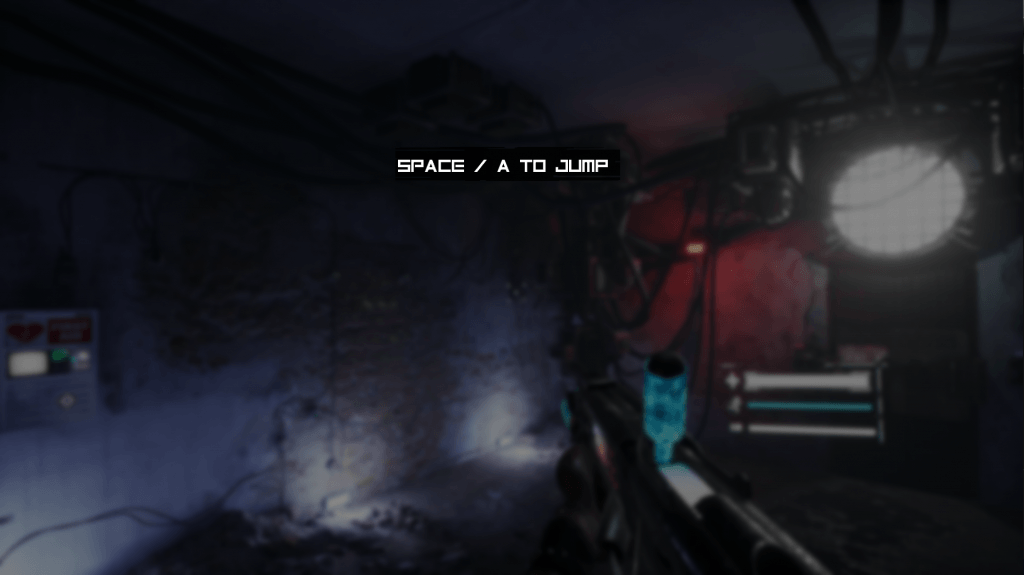 The start of the tutorial

A mode that is unlocked after the tutorial is a sort of high score sandbox where you need to kill as many zombies as possible.  You can repeat this mode to compete for a high score. However there are times (not spoiling it for anybody) where you can use your hacking devices to get a good combo.  Again, what I found is just like the main game, you run out of ammo and without a melee option, you end up dying. 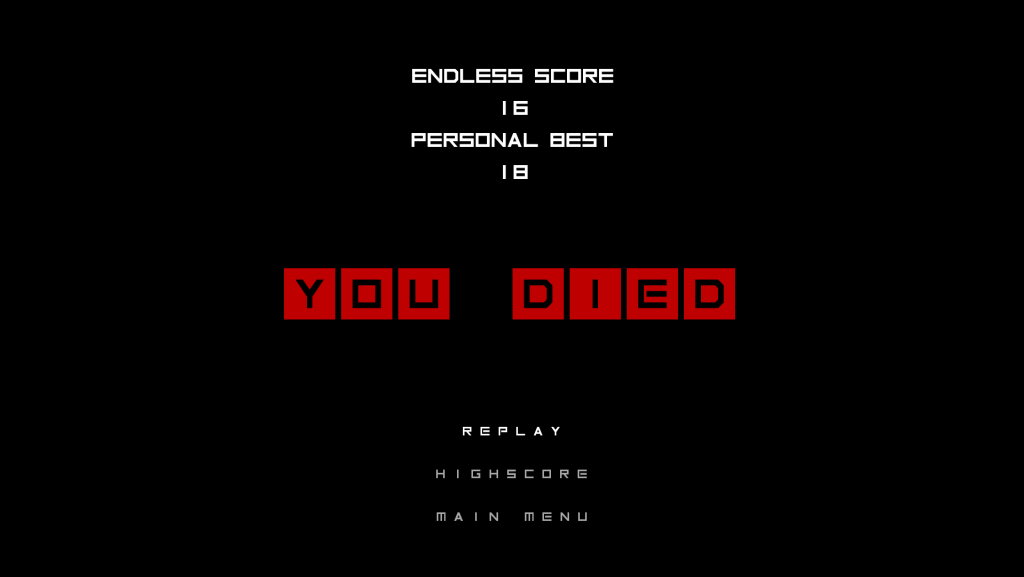 Endless mode is fine not to have a story but unless I had to go a few levels deeper, there isn’t much of a story for me to continue on within the main game.  All I feel like I am doing is repeating myself within slightly different corridors.

I think 2084 needs to be clearer on the story right after the tutorial (or even within the tutorial) so the game can give the user a sense of what’s happening around them and why they are going out killing the zombies.

Another area for improvement was hacking.  It reminded me from back in the older days of gaming where you would use  LEFT, RIGHT, UP, DOWN combinations to defeat bosses and this is very similar to what they have with hacking.  Might be a little too simplistic but I feel this needed some work.

Considering the game is still in early access, the graphics are very nice.  I’m currently using an Asus GeForce GTX 1070 8GB graphics card and when I popped the graphics settings to Ultra, the game had no trouble at all. One of the main settings I seek out in the options is a colourblind mode and discovered there are no options. However, I appear to get along with the game well enough to go through a few missions and the colours that are used appear to be easy enough to see.

The stats such as bullets, health etc. are next to your gun however, if the gun moves (so tilting for example) that bar moves too.  I feel that it should stay static in one place as on times It felt off. 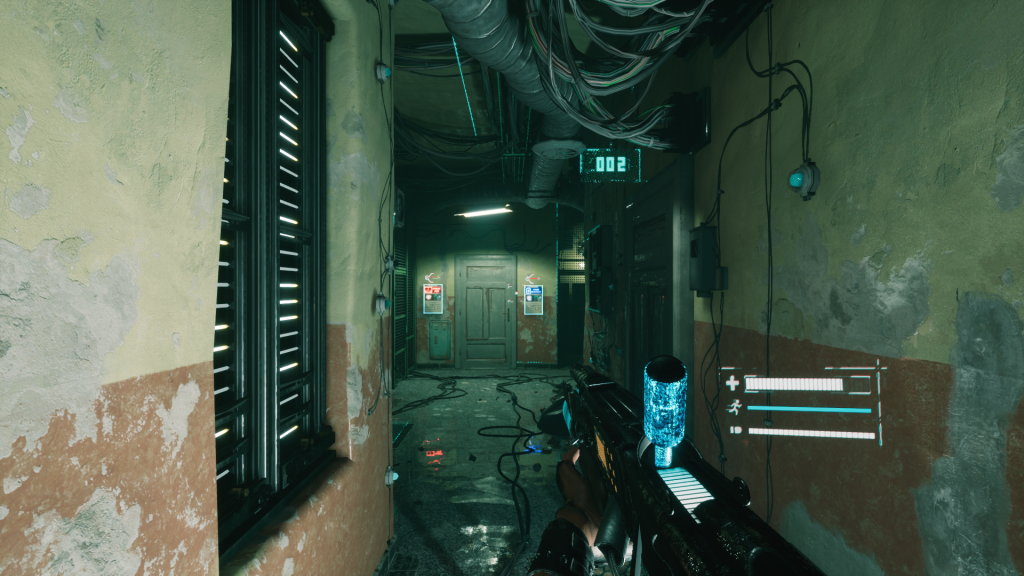 The sound effects were pretty good and when the zombies were coming for me, in 5.1, I got scared quite easily and at points, didn’t want to enter some rooms. This really did enhance the experience considering the lack of detail on the story.

The overall music of the game is really great especially once you come to the boss fights, as it really changes into a great metal track and enhanced the experience of the battle.

I managed to play just over an hour of the game before I gave up.  It was a little too repetitive for my liking and each level felt like a rehash of the previous even though the mechanics were good.

The story really didn’t shine through after an hour of gameplay either and I feel, if there is a story to be told, maybe more details at the beginning of the game would make you want to keep playing it.  There are only 2 modes: main story and endless. Both of which again, dont keep you gripped enough to continue.

It may be worth remembering that it is early access and there is going to be many changes to the point where this review maybe be redundant once the game has gone gold.

Advertised as a steampunk FPS with hacking machines,this game feels like an early access game as it does show off the graphics and what It could lead to further down the road, but currently its lacking in story and game play depth.

2084 is aimed at the single / offline player as it has has a main game story and endless mode.  With a lack of story, It didn’t grab me enough to continue on with the game but it’s something that I will keep my eye on as I feel it has great potential as it enters a release.