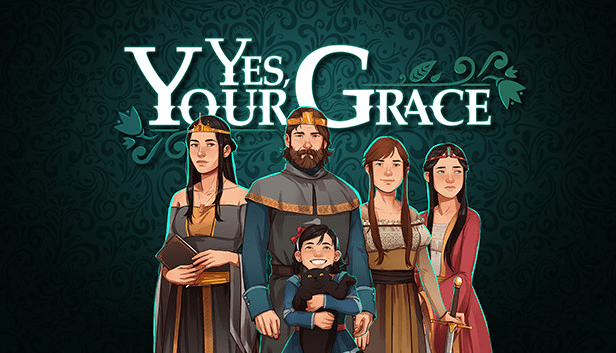 Lo! Sound the bugle! A new game this way comes and thou will now bow and pay homage to its review.

Be the latest offering from developer Brave at Night fair or foul? Gather close, simple peasant, and all shall be revealed. But hark, speak ye not unless spoken to, and reply to my demands only with ‘Yes, Your Grace‘, otherwise you’ll be in an iron maiden for so long people will start mistaking you for Eddie.

Yes, Your Grace is a story-based medieval fantasy kingdom management simulator (or an SMFKMS, as the genre is more commonly known…).

You play King Eryk, a man devoted to his wife and three daughters, and ruler of the small realm of Davern that is somewhat down on its luck. Aside from the usual pressures that rulers face, some years ago, you rather stupidly promised your first daughter’s hand in marriage to a lowly thug from a kingdom on the other side of your mountain range. That thug has now gained power and is intent on marching a large host up to your gates to claim his wife. Crikey.

Whilst there’s a good deal more to the plot, which evolves as the game proceeds, I’ve no intention of spoiling it any further here as, in my view, Yes, Your Grace is very much a narrative-driven experience. That’s not to say there’s not a lot of different gameplay elements to it, however. In fact, it’s quite hard to pin down exactly what the fundamental concept is.

My first thought was that it bore a lot of similarities to the game Papers, Please (where the player has to check the identities of people crossing his country’s border), as King Eryk’s weekly business involves listening to, and vetting, the troubles of his subjects as they approach his throne. One moment you might be sending out your general to look for a missing child, for example, whilst the next you might be refusing to give a villager some gold to sort out their son’s drug habit. 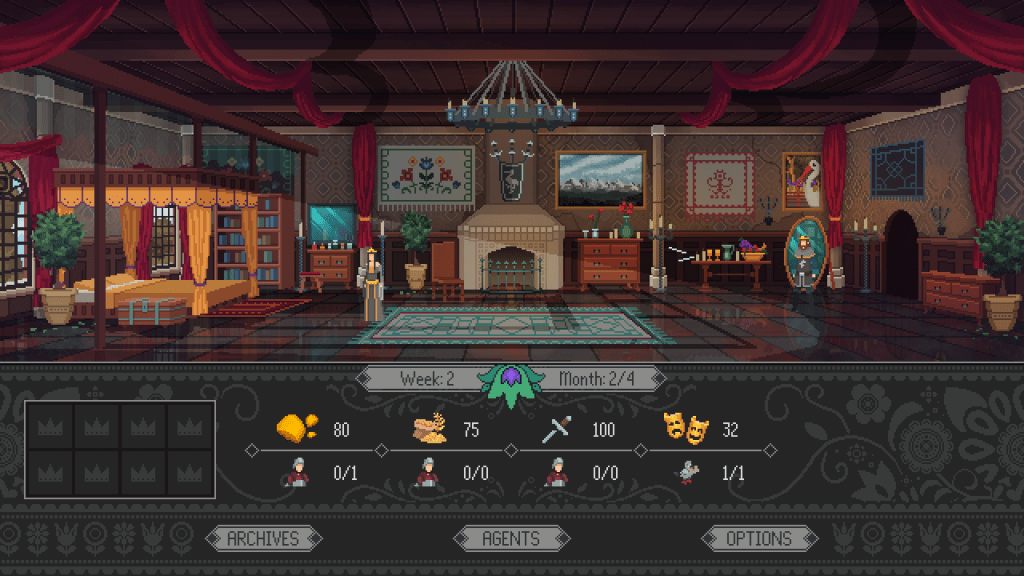 You know you’re a king when your bedroom is the size of a house.

In addition these kingly duties, however, there’s a huge RPG streak running through the game and you will regularly be leaving the populace to one side to talk to your family members and local lords, advancing the plot as you do so. Just to give a flavour of these interactions, your eldest daughter doesn’t want to get married, your middle daughter is becoming a bit of a handful and your youngest daughter keeps dragging new pets into the castle…poor old Eryk’s getting too old for this shit! The conversation options you select may also directly affect elements of the plot, so you have to choose wisely. This part of the game plays like a low budget Monkey Island, including having an inventory slot (that’s, in truth, underused). It even features some set-piece battles!

Finally, there’s the management simulator part of the game. The kingdom lives or dies off of three resources – gold, supplies (i.e. food), and populace contentment. If any of them run out, you’re going to be heading towards game over. This is made even harder by the fact that all the problems being brought to you by your subjects are usually going to drain one of them. Give a guy some money to build an inn? Fair enough, but your gold has dropped. Tell him to get lost? Your decision, but your people’s contentment is going to go down.

It’s really quite challenging, and it becomes progressively harder to balance these resources as the game plays out, particularly given that you’ll want to be spending some of them on upgrading your castle at the end of a week. Indeed, there are many times where you’d love to help someone but simply can’t do it because you don’t have the money. There are also sometimes when you can’t really afford to do it, but can’t afford not to because contentment would drop to a critical level. 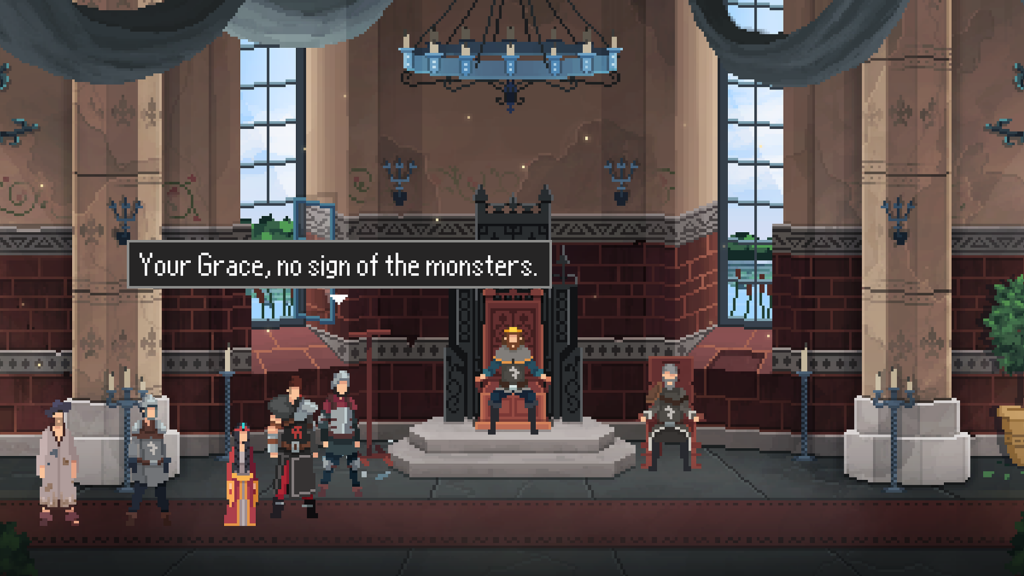 Monsters do actually exist in the world of Yes, Your Grace though!

Fortunately, you are given some hired hands (a general, a witch, and a hunter) who can take on tasks as well, which in theory could save your precious resources. Unfortunately, these hired hands each have weekly upkeep and, by the end of the game, you may find it hard to be able to keep all three going at once because resources are so scarce (seriously, by the time the game ended, I was probably one week away from complete disaster!).

So, three games in one then, but is Yes, Your Grace greater than the sum of its parts? Well, yes and no. All three of these different gameplay elements play along quite nicely together and, in general, they make for an enjoyable experience.

This being said, I did find that, as the game went on, the seams started to show a bit and the plot was a lot more on the rails than I first imagined it to be. The ‘peasant surgery’ and ‘resource management’, likewise, felt much less like a case of making choices to influence the direction of the kingdom and much more like me simply trying not to lose the game through my resources disappearing. Towards the end, I ceased to care whether or not someone left the throne room frustrated because all I cared about was keeping my gold above zero. Maybe that’s what the developers were going for, but I would have preferred to have had the opportunity to act with a touch more freedom.

It’s also worth noting that not everyone who visits your court has your best interests at heart, so you do have to be on your guard. Frustratingly, however, it can be almost impossible to tell the con merchants from the honest citizens, so this part of the game can feel more of an annoyance than anything else. I will tell you now, there’s nothing more blood boiling than finding out that the well-dressed guy you gave money to a month ago to revive his business has blown it all down the pub!

Oh, and did I mention that you can’t save the game except via an autosave at the end of Eryk’s week and that the game only maintains the latest eight weeks? I hope you don’t screw up too badly, sire! 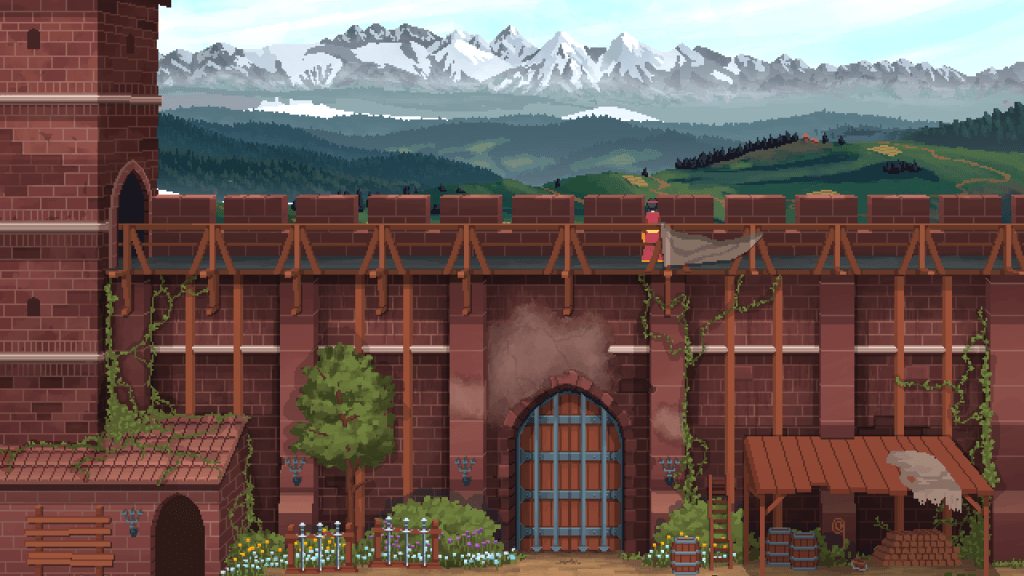 I bet this place gets booked up so quickly in the summer months.

It seems to be the fashion nowadays to make game graphics using pixel art. I’m a cynic and personally think this is just being done for economic reasons (it takes less time to animate a basic pixel sprite than a more detailed one). Having said that though, the developers would probably say that the game is focused around its gameplay and that complex visuals would serve as a distraction. It’s an argument I’m willing to accept as, after the first few minutes, your mind is solely focused on playing monarch. The backgrounds are, at the least, very nicely drawn, although the limited number of locations in the game means that you’ll soon get overly used to them.

I’m not singling out Brave At Night here, but I really do long for developers to start getting more creative in the art department – it’s like someone serving you a superb meal but making you eat it in the dark – novel the first time you do it, perhaps, but there’s a reason we invented candles. 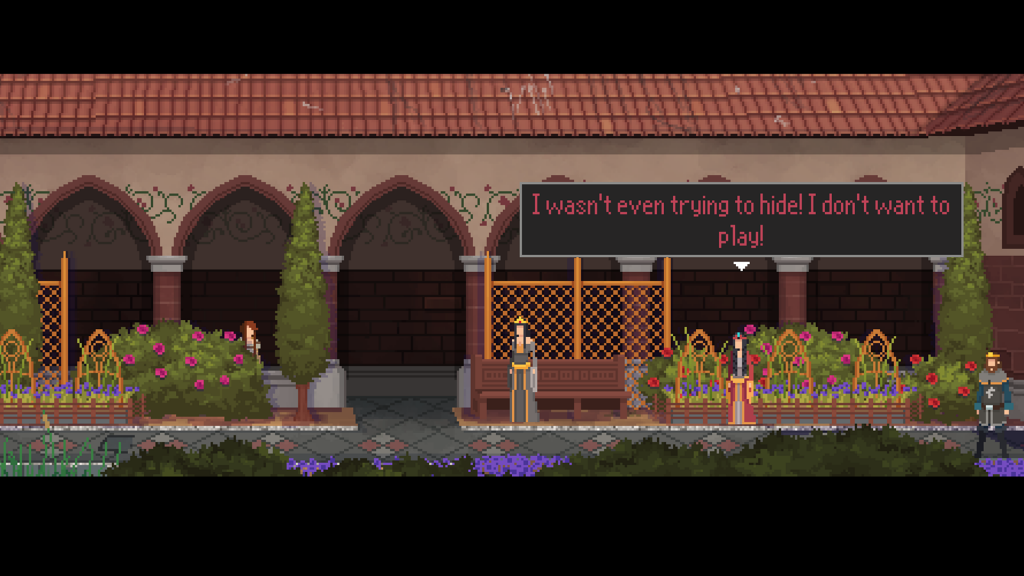 In contrast to the graphics, the audio in Yes, Your Grace is a much more spirited effort. Whilst the characters aren’t voice acted in English, the made-up language, punctuated with each character’s sighs, moans and yells does an excellent job of conveying their emotions as the story progresses. You do feel a genuine connection to your family members and become invested in the storyline due to the sound.

Similarly, the game’s music hits the right notes. You’ve heard this stuff before, of course – medieval string sections, folksy drums, and various stringed instruments that suit the period, but the tunes are catchy and that’s the main thing. There’s even some nice vocal turns on a few of the pieces. Occasionally things jar slightly though. I’m not a big fan of the modern 4/4 drumbeats that occasionally appear, and I’m definitely not a fan of the electric guitars that intrude on the main menu music partway through. Or, for that matter, the rather gruesome folk-metal track that bounces around after the game is completed. This modern instrumentation spoils the immersion somewhat and, look, if I wanted to listen to that sort of shit, I’d hit up an Elvenking playlist. And I don’t want to. 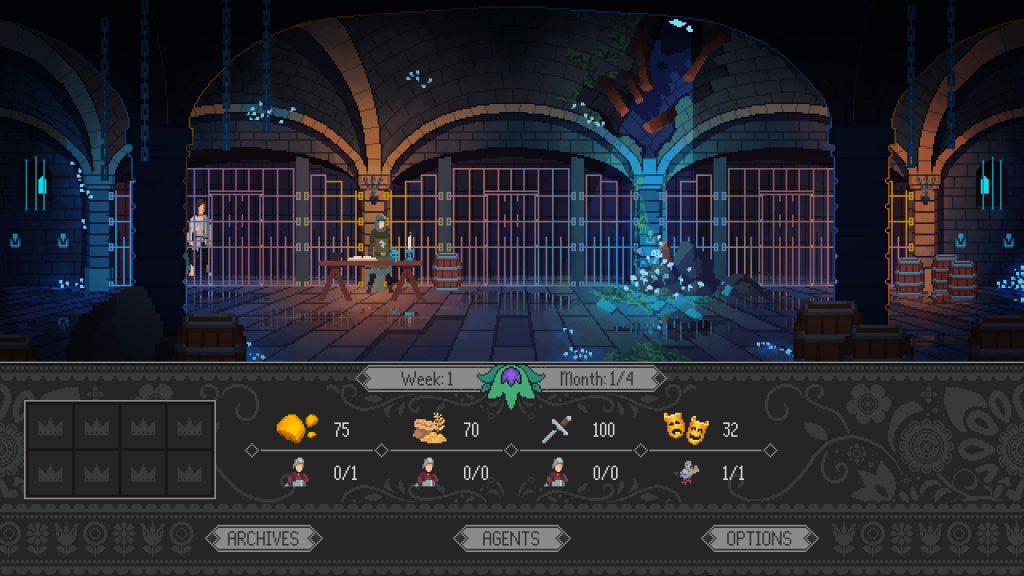 The opportunity to throw people into your dungeon is a nice touch.

How many hours of gameplay will you get from Yes, Your Grace? Well, this is a difficult one to answer, really. It took me about 6 hours to complete the game, which isn’t a huge amount of time for something that’s currently selling at £15.49 on Steam. In saying that, however, I only explored one possible ending, and others are available. My issue is that I don’t necessarily feel like replaying everything to get them – there’s simply not enough gameplay there to hold my interest (remember, you’re basically making yes/no decisions on a lot of things). As I said at the top of this review, this is a narrative experience, and for most people, it will be a ‘one-shot’ one.

I think Yes, Your Grace is a really interesting concept for a game. It does a lot of stuff really well and has an interesting and involving plot that can have you both laughing and then shedding a tear within just a few minutes. Whilst I think the price point is slightly on the high side at the moment, given that the game isn’t super long, its a well-made creation and I had a lot of fun with it. It also makes me excited for what Brave at Night might come up with next. If you’ve ever wanted to be king for a day, this might be the game for you. By royal decree, I give Yes, Your Grace a Thumb Culture silver award. And it only fell short of the gold by a nudge!