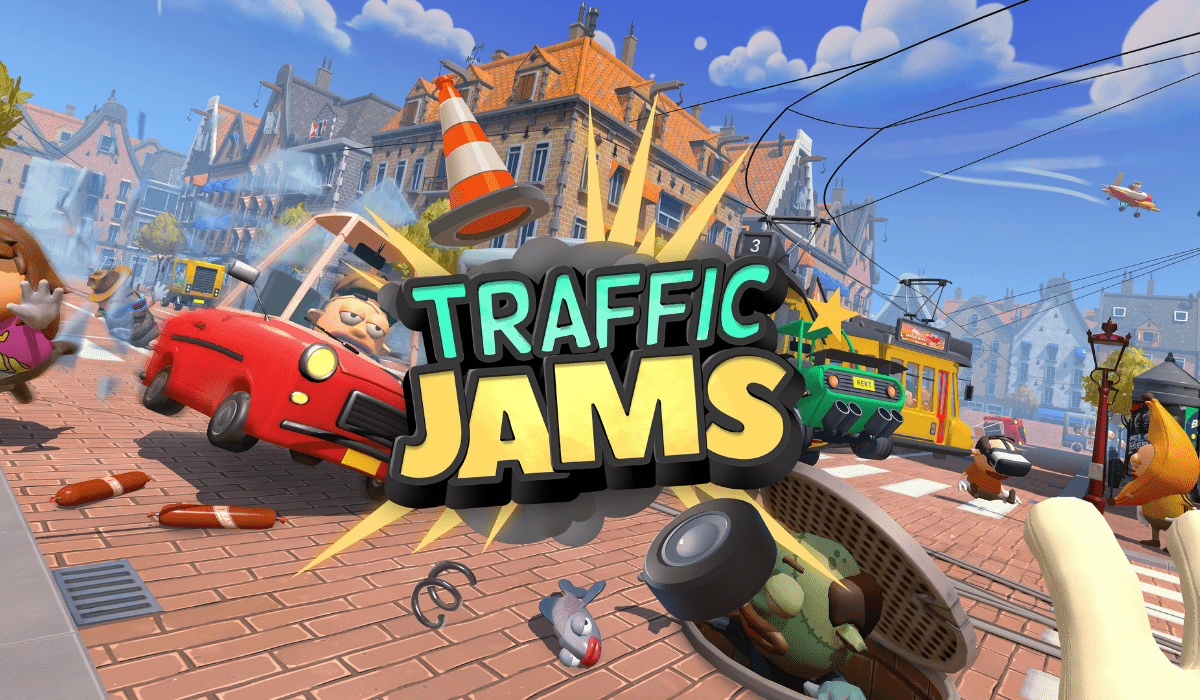 Traffic Jams, developed by Little Chicken Game Company and published by Vertigo Games is a tongue in cheek look into the world of traffic management. Donning your VR headset of choice you will embark on a perilous journey that will see you directing traffic, swatting wasps, throwing frisbees as well as fish! Yes, your nerves will be tested, how long can you hold that angry driver at a standstill, how many balloons can you pop with a frisbee. This is a game like no other.

No really, I don’t recollect any game where you are in charge of traffic in this way.

Available on Oculus Quest, Rift, and also playable through SteamVR, Traffic Jams is just fun. Read on to find out more.

Have you given Traffic Jams a go? What did you think, leave us a comment below?

When you first dive into Traffic Jams you are greeted with a nice colourful, cartoon-ey style world, dive into your first task… Training.

Being guided by Dennis who is the self-proclaimed best traffic controller… EVER. You are shown the basics of the game. Essentially combining you pointing at traffic or a pedestrian you raise your hand up to make them stop, and then frantically wave them “come on” to make them go through either at normal speed or in a hurry. Sounds simple right?

Well, you are wrong. You have to be aware of multiple directions, which cars are going which way, as well as making sure you give the traffic a command to do, otherwise they will continue to become enraged and eventually just ignoring you and ploughing through the junction without fear of consequence.

The game itself takes on different locations as you make your journey to becoming better at Traffic Jams than Dennis. Your journey will take to around the globe starting at a nice small intersection to eventually taking on massive sections which will challenge both your dexterity as well as your awareness inside that headset.

Each level gives you a number of challenges which are as straightforward as completing the level with a certain score all the way to throwing fish at people wearing certain hats. It’s simplistic at heart, but to master, it will take time and patience. Don’t forget to point at Dennis if he appears at your intersection though!

Traffic Jams is predominantly a single-player game, but if you have friends that want to either help or hinder you then you can dive into the awesome party mode. Get up to 4 friends to go to the Traffic Jams app website and there they can send you the needed vehicles, pedestrians, etc needed to accomplish your goals. Yes, you are meant to work together, but can you trust your friends enough not to throw a spanner in the works from time to time?

As previously mentioned the graphics on Traffic Jams are cartoon-ey and they are perfect for this style of game. I think having something too realistic would leave you with a sense of dread if you were to fail. Having a character walking down the street with a pizza slice on their head gives you a sense of “everything is going to be ok” and that if they got run over by an angry driver that it wouldn’t matter all that much. Obviously try not to let any pedestrian, or vehicle for that matter be involved in a Road Traffic Collision.

Audio-wise, the game is lovely. The sound of traffic in your ears, with a great soundtrack to keep you going. Oh and not to mention Dennis, what a character! Every time he appears on screen it’s comical and whimsical. Plus he loves to shake his money maker!

You will spend hours playing through Traffic Jams, if not just to complete all the levels, but to complete the massive number of challenges for each level. Add to that the party mode that you can get your friends and family involved, you can even get friends online to get involved. Although being able to cast the game screen and play couch coop will add a completely other side to the party side of things

In conclusion, Traffic Jams brings an amazing challenge beneath the surface of a simple at heart game. 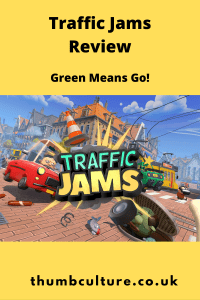