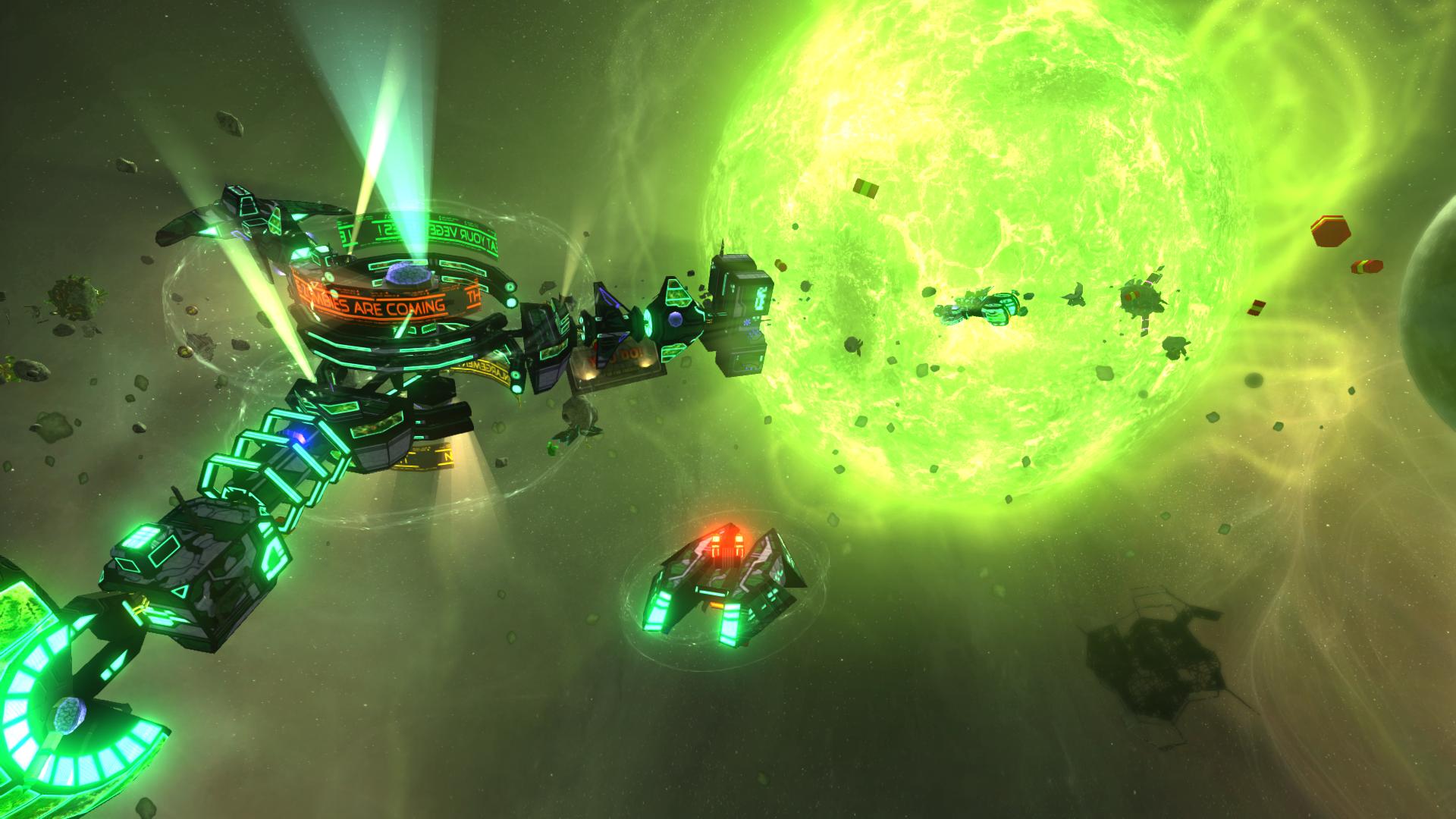 Space Pirates And Zombies 2 was an interesting title to come my way. It is developed and published by MinMax Games Ltd.  I have never heard of the previous SPAZ (Space Pirates and Zombies) but immediately started to love this one. From the whacky cast of characters that I have come to love, and hearing them talking about the meaning of insanity, making a blatant and funny Far Cry joke. It kept me playing for hours at a time.

The gameplay is very fun with some minor learning curves.  This is something I have come to expect after playing games like Rebel Galaxy. Space games seem to always have a learning curve to them, this game being no different.  You start the game off in a “janky” mother ship, tasked with fixing her up with better parts. The tutorial section of the game is interesting and useful as it gave me a good amount of base info to start with.  Building the mother ship and finding and upgrading parts was so much fun to do. As you get better parts and learn more about the game and combat you get better at choosing the parts best for your play style.

Some of these play styles include but not limited to are:

The mother ship you fix up and give proper parts can have up to 4 other smaller ships with it. These ships are like back up\followers. If you use them just right they can take down an enemy mother ship while you fight another. This is one of my most used strategies for taking down ships when the fight is 1 Vs 2.  The ships come in 3 levels, small, medium and large. As you play and level through the game you will unlock more ships, with my favourite being the ranger due to its size and manoeuvrability. My favourite larger ship has to be the gold digger but only because of the name.

I found myself constantly rebuilding and upgrading my ship to make it better.  Keeping my ship fuelled up was fairly easy to do. The whole galaxy in this game runs off of Rez.  Having that in good supply is important and being without it can be a pain in the butt. Gathering resources was not hard but don’t slip up or you may find yourself in a jam when you least expect it.

The cast of the game is very funny and always butting heads.  Be ready for lots of laughs and crazy personalities. The stern captain, the crazy cyborg scientist, the old computer illiterate general, and the hillbilly ship repair man. (Yes hillbillies in space lol) Along the way you will meet more people and interact with different factions. The Factions are Sovereigns of Science, Civilian Ascendancy, Miners Conglomerate, Void Militia, and Sun Hunters. The faction pilots feel… empty at times as in they don’t feel very lively. Each pilot will have their own character graphic but that’s about it.  They use the same generic lines. It won’t take long until you hear them all.

The pilots may be lacking personality but how the factions function is not. They will go to war with one another and try to take each other’s star bases. Each one has their own parts and ship style to them.  Their parts also come in levels such as small, medium, large so don’t worry about not having options.

Having a star is fun I highly recommend you pick one with lots of resources is the area the more the better.

The graphics in Space Pirates and Zombies 2 look pretty and at times make me think of borderlands arts style. The user interface is not cluttered unless you are doing some trading. The trading menu can feel packed at times with the main travel menu being nice and simple to understand.  I like the look of combat in the game it looks very colourful and “spacy”.  I had no frame drops so that is always great.

Space Pirates and Zombies 2 sadly lacks a memorable sound track. Even during intense story moments. Rebel Galaxy had an amazing sound track that made everything feel better. I feel like this game could have done with something like that.  I found most of the tracks to be bland and generic.  When you go into combat you want music that will make you feel pumped up and immersed in the moment. On the sound effect side of things it was good and what I would expect.

The answer to this is yes, this game could last you quite a while. There is story mode and sand box mode. I loved being a part of a faction before I started my own. This game has many role play opportunities. I highly recommend that you play through this game at least two times.

With all that being said, Space Pirates and Zombies 2 is very fun and will fill all you bad ass space pirate needs. It will fill you in on what happened in the last game so you are not left in the dark. I love the people on my ship they are all very cool.  Once you get a good feel for the game things really start to take off. So be ready for endless fun.