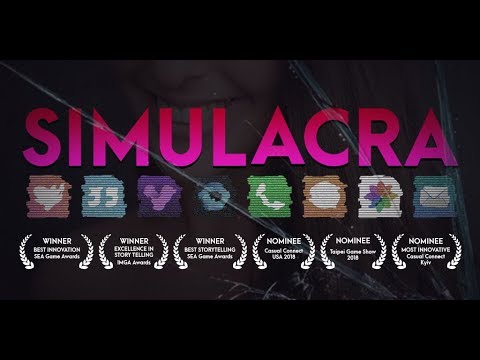 Simulacra is the latest “lost/found phone” game to come to the Nintendo Switch. If you are unfamiliar with the genre, these games centre around the player being asked to dig through some unfortunate’s phone to discover how they came to be parted from it in the first place. Simulacra was developed and published by Kaigan Games and released on Switch on December 3rd 2019 for £9.99.

Like “Sara is Missing” from the same developer, Simulacra attempts to find horror in the mundanity of social media platforms, this time around placing a heavy emphasis on the dismal world of online dating. The phone this time around belongs to Anna, a pretty 20-something who was undergoing a number of personal crises before disappearing altogether.

If you have used a smartphone in the last  10 years or so Simulacra will instantly feel familiar. Gameplay takes place across a suite of apps, each replicating what would be found on a typical 20-something’s device. This means a Tinder-like dating app,  a Facebook-style social media platform, email, chat and a photo gallery are all present. Not all of these apps are instantly accessible, requiring you to dig through photos and conversations to find password hints and progress the story. As you play a cast of dubious characters will message and call you, and it’s up to you to decide if they are a force for good or if they are somehow involved in Anna’s disappearance (or both!).

Besides self-guided detective work, there are several facets to the gameplay. Some messages are corrupted and must be reconstructed from their constituent parts. Sometimes you might come across a photo which has to be put back together via a simple mini-game. Chatting with characters in the game involves choosing a response from a fairly limited selection. It’s not made clear at the start of the game, but how you respond to each character has a direct impact on how the story progresses. More complexity is introduced via group chats where characters clash with one another and you are forced to take aside.

Simulacra is tense from the off, and it emulates the experience of using a modern-day mobile phone pretty well. The act of snooping through someone else’s phone and learning their intimate secrets feels grubby, and the uneasiness is not helped by occasional demonic jump scares and unexpected phonecalls to lurch you out of your false sense of security. Unfortunately, the scares are all too few with most of them being focused in the first half of the game when the motives of the various characters are entirely unknown. The revelations about Anna’s private life are sometimes troubling, but they sit firmly in the realm of melodrama rather than all-out horror. Furthermore the mini-games, which could have offered a great opportunity for frightening moments, often feel like busywork. Rarely does an un-corrupted message or photo reveal anything horrifying?

Controlling Simulacra is a bit unwieldy too. Moving between apps on the phone is a little slow and cumbersome at times, and using the on-screen keyboard to enter text is not good fun. There is no ability to copy and paste information, meaning tedious manual input is necessary for the instances where information must be transferred from, say, an email into fields on a website. Inputting into a field incorrectly will typically mean having to start again. Playing in handheld mode allows touchscreen input, but the on-screen keyboard was too small for my massive hands, and an option to rotate the Switch and play vertically, or maybe even rotate the virtual phone screen, feels sorely missing. Simulacra feel like maybe it would work better on an actual mobile phone.

The experience sometimes feels a little too guided. Characters often don’t leave you alone for long enough to allow you to make your own decision as to what your next step should be, and they typically spell out exactly what you need to do to move the story forward. I preferred the progression in “A Normal Lost Phone”, which felt a bit more naturalistic and rewarding.

Another issue with Simulacra is the extremely sloppy translation and questionable acting in video and audio segments, which both serve to disrupt the feeling of realism. It’s entirely believable that a 20-something social media user might make the odd typo, but the number of mistakes and misspellings,  even on the nation-wide criminal database you access at one point, is staggering. It would have been worth investing in a proper localisation effort, even if it was just to properly emulate the speech patterns of the kind of American hipsters this game centres around.

All that being said, Simulacra is an engaging romp and doesn’t out-stay its welcome. There are some genuine chills, and the game creates a palpable sense of a world outside of the phone, especially as characters begin to undertake actions which have drastic consequences for themselves and others.

In spite of the puzzle solving feeling a bit hand-holding at times, Simulacra actually offers a great degree of determinism over how the story plays out, and I will play through again whilst approaching key characters differently to see what outcomes can occur.

Simulacra emulate the appearance of the apps found within a smartphone pretty well. It is impressive that Kaigan Games managed to put together semi-functional (albeit shallow) versions of the Facebook app and Tinder. The visuals won’t blow you away but they’re not supposed to. They do exactly what they need to sell the concept.

Music within the game is pretty negligible, aside from some sinister clangs and gurgles during the scarier moments. As mentioned previously, voice-acting is often below standard. Greg, Anna’s ex-boyfriend, is extremely OTT, especially in his first appearance. Taylor, one of Anna’s matches on Spark, seems to change accent from line to line. Thankfully Anna herself is acted pretty well. Sound effects are fairly minimal, but usually employed effectively. Anna’s ringtone is suitably sinister and startling, especially when you’re not expecting a call.

Simulacra is a short game, and can be completed in just a few hours. Multiple endings offer some replayability, although whether you’ll want to do the same puzzles again to see a different ending is down to you. The £9.99 price-point doesn’t feel unreasonable, given that the game is akin to an interactive horror movie which can be enjoyed with a partner or a friend.

Simulacra is an enjoyable experience, even if it is not the best example of the genre. You’ll find an interesting but ultimately rather shallow story. The concept could have been taken further, with more exploration surrounding what it means to broadcast your identity through a device which fits in the palm of your hand. A device which can be lost or compromised and used against you. In spite of this, I had a good time with Simulacra, and I give it the Thumb Culture silver award.