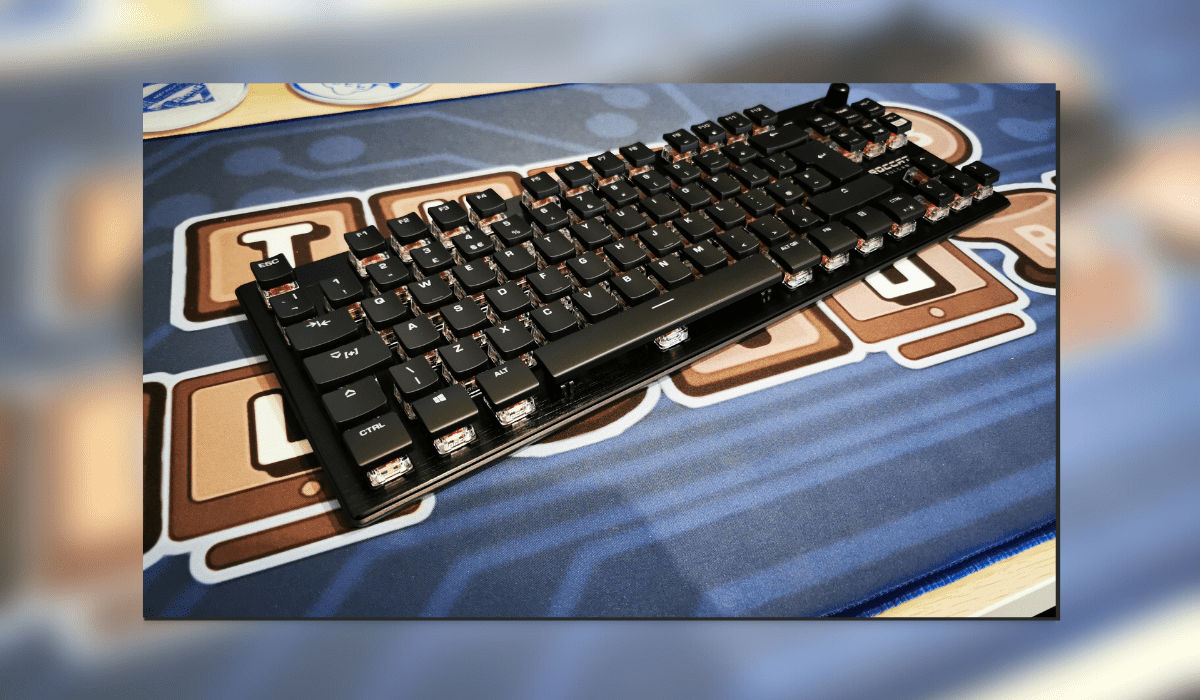 One of the big players in gaming keyboards, Roccat, have released this awesome little package. The Roccat Vulcan TKL Pro doesn’t just sound good, it actually backs that up with sturdy hardware, responsive keys and a whole host of other benefits.

Strapped for space, then a TKL could be just for you

Having used too many keyboards to remember since taking over Thumb Culture. It’s always nice to have a keyboard that you can quite easily see replacing your day to day one. Did the Roccat Vulcan TKL Pro hit this high accolade? Why not keep reading to find out?

Lets just take a moment to congratulate Roccat on some amazing looking keyboards. The Vulcan series, in my eyes, is some of the most stunning hardware that is around. Having owned the full size Vulcan 120, I was incredibly keen to give the TKL Pro version of the same keyboard a go. With a few upgrades from the keyboard that I personally owned, the Roccat Vulcan TKL Pro is in my eyes, head and shoulders above the majority of others when it comes to its aesthetics whilst sat on your desk.

So starting from the cable, we have a nice flexible braided cable that can easily fit wherever you need it to travel through. From my PC to the desk I have a whole host of cables. Being a work from home desk there are cables for a work computer, 2 consoles, as well as the 5G router for using my VR wirelessly (Yes I do have something wireless). Whilst this cable isn’t groundbreaking or anything, it is detachable from the keyboard, which is incredibly convenient. Especially, when you need to update the keyboard, with the Roccat Swarm software as this requires you to unplug the keyboard and plug it back in. Having the cable at the back of the keyboard is just so much easier than trying to get through the “cable jungle” as I like to call it. Yes, I’m not big on cable management ok!

Then you have the main body of the keyboard. It’s pretty important here to take a step back to admire the build quality of the Roccat Vulcan TKL Pro. Firstly it’s heavy, weighing 660g might not sound a great deal, but what it does is give stability. Especially when you are typing on the keyboard. Now I know that not many keyboards shoot off the desk at the mere press of the space bar, but just that reassurance that wherever you play your TKL pro is where it’s going to stay. Obviously, gaming rage related incidents are not the responsibility of Thumb Culture, unless we just beat you at Rocket League, in which case…. EEEEEEEEEZZZ

Ahem, anyway back to the matter at….hand. The keys on the TKL Pro are using the new Titan Switch Optical. Essentially this takes out an actual physical trigger for the key and harnesses the power of light. Making the keyboard super durable and long-lasting and durable up to 100 million keystrokes. Not sure what will happen when you reach that high number, perhaps the TKL Pro will transform into something else. At this point I wouldn’t put it past Roccat to have delivered us a nice discreet Transformer, ready to take over the work when Megatron commands!

Let’s Talk about RGB, so as usual, you can customise your lights to however you want. Millions of colours and all that. Can you tell that I’m not all that fussed about RGB? The thing that this keyboard does incredibly though is actually show off the switches using the RGB. The Roccat Vulcan TKL Pro has incredibly low profile keycaps on full-sized keys, so you are giving a greatly increased illuminated area, allowing you to see what switches below the keys super easy. This just looks fantastic when lit up in the dark.

With the Roccat Vulcan TKL Pro being off the tenkeyless design, the number of buttons are obviously limited. This doesn’t stop the TKL pro from being incredibly versatile.

I don’t tend to dive into changing keys to macros and all that when I use a keyboard. Purely because I just like a keyboard to be a… you know… keyboard. Press a button and it appears on the screen. The TKL Pro, does however have a nice little “twiddle knob”, yes I know it’s not its true name, but I prefer it. This controls the volume of the PC, which makes pretending to be a DJ all that better. Alongside that is a quick mute button, especially handy if someone comes to the door behind you and you don’t want them to hear that you still listen to Steps. Erm…what!

Using the Roccat Swarm software though you can change everything up if you wish. With a number of preloaded presets, you can change the keyboard to be game or even application-specific. By using the Easy-Shift button you can effectively double the number of actions that your Roccat Vulcan TKL Pro can do, although I haven’t dabbled in this before it’s very handy to have a nice quick button ready for opening different applications.

The Roccat Vulcan TKL Pro is pretty compatible, looking on the website it states that its compatible with Windows 10, 7 and 8. Obviously an internet connection is needed to download the software. But, the keyboard works just fine without the software, you just don’t get the bells and whistles. Make sure your computer has at least one USB 2.0 port to actually be able to connect this keyboard.

I absolutely love this Roccat Vulcan TKL Pro. For the longest time I was a doubter of the tenkeyless form factor, always believing that I needed that number pad, especially in my day to day work. However, after spending time with this beautiful little package I can honestly say that my opinion has changed. The TKL Pro has the Vulcan look and functionality, but with a much much smaller footprint.

If you are looking for a gaming keyboard that has that something extra, then the Roccat Vulcan TKL Pro is definitely for you. I can not praise it highly enough.