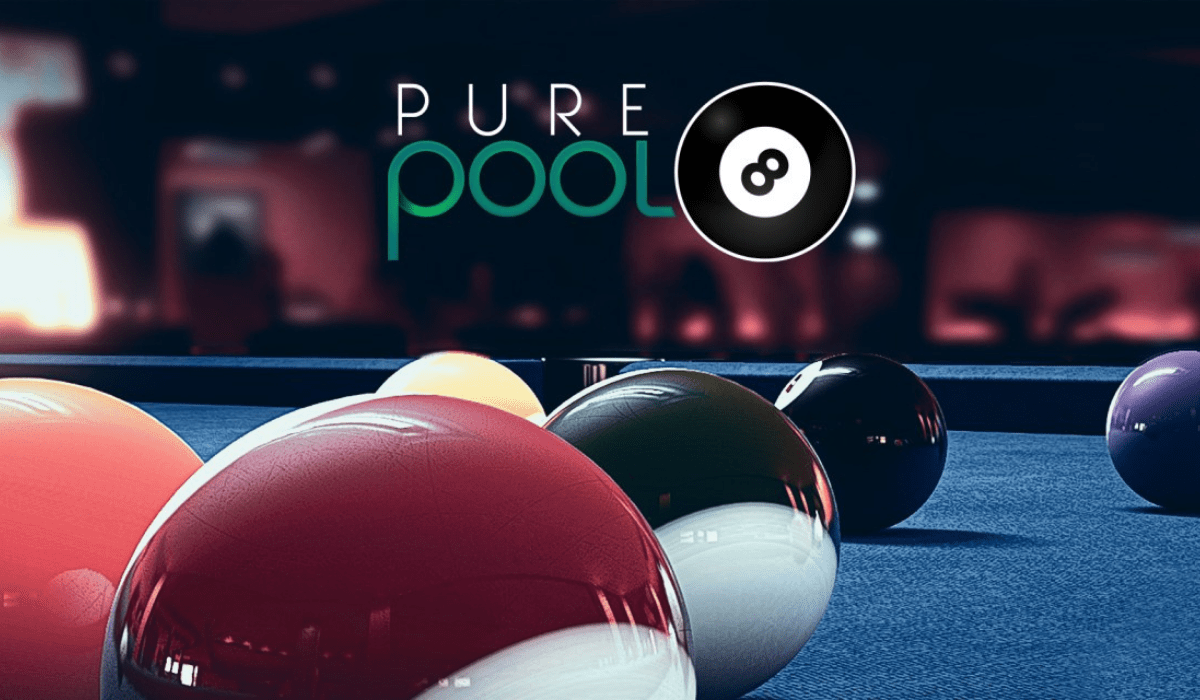 Pure Pool by devs VooFoo Studios and published by Ripstone Ltd is not a game about swimming, nor is it, thankfully, a water cleanliness simulator.  No, this is in fact a well-rounded pool game of the cue variety!

Out now on all platforms, Pure Pool recently arrived for the Nintendo Switch and for this review I will be playing it on the Switch Lite.  If you have tried this game out, let us know what you think about it in the comments section below!

If you enjoy your games of pool down the pub or club with your friends, I won’t lie they seem like a distant memory at the moment, then this is definitely the next best thing to busy yourself with.  VooFoo has seemingly released a pool game that is actually close to the real thing.  There are no silly power-ups in sight, nor are there any cheaty birds-eye views of the table with an extended projected line from the cue bouncing around the table to make it nigh-on impossible to miss your shots.  This is, as the name implies, Pure Pool.  Oh and snooker, snooker is also hiding here 😀

Breaking it down you get a number of game modes to satisfy whatever mood you may be in.  The main element for me was the career mode whereby you get to enter into amateur tournaments at first, building up to pro and master.  Each tournament, against AIs, is split into stages requiring a number of games to be won in a progression tree in order to unlock adjoining games.  For each game type you play such as US 8-ball, Speed Pot and Perfect Potter, there are set challenges for you to try and beat, each giving you a star that accumulates to unlock the next part of the tournament.

If you don’t fancy a tournament then you can go to the challenges section where you will find a whole host of game types across both pool and snooker tables.  You can channel your inner Virgo as you try to pot as many balls as you can before the timer runs out as well as try and achieve that perfect snooker break score of 147.  If you’re craving a bit more interaction then there is also a 2 player mode and an online mode where you can truly test your skills as well as play that classic that is killer!

The gameplay is a very simple affair whereby you move the cue using the left analogue stick and by holding various buttons you can assign spin, pick up the cue ball and place it, etc.  You can move freely around the table to look at the available shots however remember that in Pure Pool there are no over the top extension lines to give you a detailed idea as to where the balls will go.  This makes the game a lot more realistic.  Similarly, when you go to take a shot the power indicator is a simple affair.  Using your finger on the touch screen allows you to see how much power you are applying however if you use the right analogue stick to slide the cue back and forth then the power indicator does not move.  I’m unsure if this is a bug or not.

As the match gets to its conclusion the background music that has been ambiently playing stops and the background of the venue that you have been playing in darkens to put you under pressure and help you focus.  The only issue I had with this was when the black ball I was hitting was near the end of the table and I was at the dead opposite.  I had to check the brightness of the Switch as the corner pockets blended into the darkened background making the shot very tricky to setup.

Every win and match that you take part in adds to your overall profile progression that allows you to unlock various cues.  Being able to change the baize colour and table skin was great should you want to have a traditional British pub pool table.  Can you be the best in the world and beat Heimgang who sits in pole position having won 337 games out of 418?

On the Switch Lite Pure Pool looked very tidy with polished graphics.  The textures of each surface are very realistic and make the game more enjoyable.  The backgrounds are a lot more than some pool games whereby you just have walls filled with posters.  Each setting is dynamic, featuring people in the background socialising while you carry on about your game.  I quite liked the bar setting with the band playing in the corner, great touch.

The soundtrack to Pure Pool is an original one that acts as a background filler rather than a distraction.  The tracks are a mixture of an almost sit down dinner variety along with progressive jazz featuring gentle drums, pianos and other instruments.  Overall it accompanies the game very well.

Getting to the sound effects, well there isn’t a lot really in pool.  Without the swearing that you normally have when you are playing down the pub, you instead have the authentic click and clack of the balls colliding with one another or leaving the table.  There is, of course, the dull thud as a ball is swallowed by the pocket as well as the odd cheer or notification that you’ve made a foul or won!

Pure Pool is a casual game that you will pick up and play for a bit and then put down as and when you crave playing it.  Through levelling up and also gaining accolades at various stages in a match all the way to trying to be the best in a competition, the amount you play is down to your own competitiveness really.  There are many game modes to try out and a full set of rules are available from the menu which does help you at times.

Pure Pool is probably the closest to a realistic pool game that I have played and you can tell from many of the refinements that the devs have spent a long time perfecting it.  The cinematic moments when potting the final ball is a good touch and add to the satisfaction of the win, especially if it has been a clutch, which a few of mine were!

I give Pure Pool a Thumb Culture Gold Award. 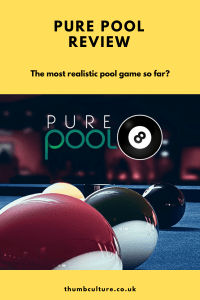