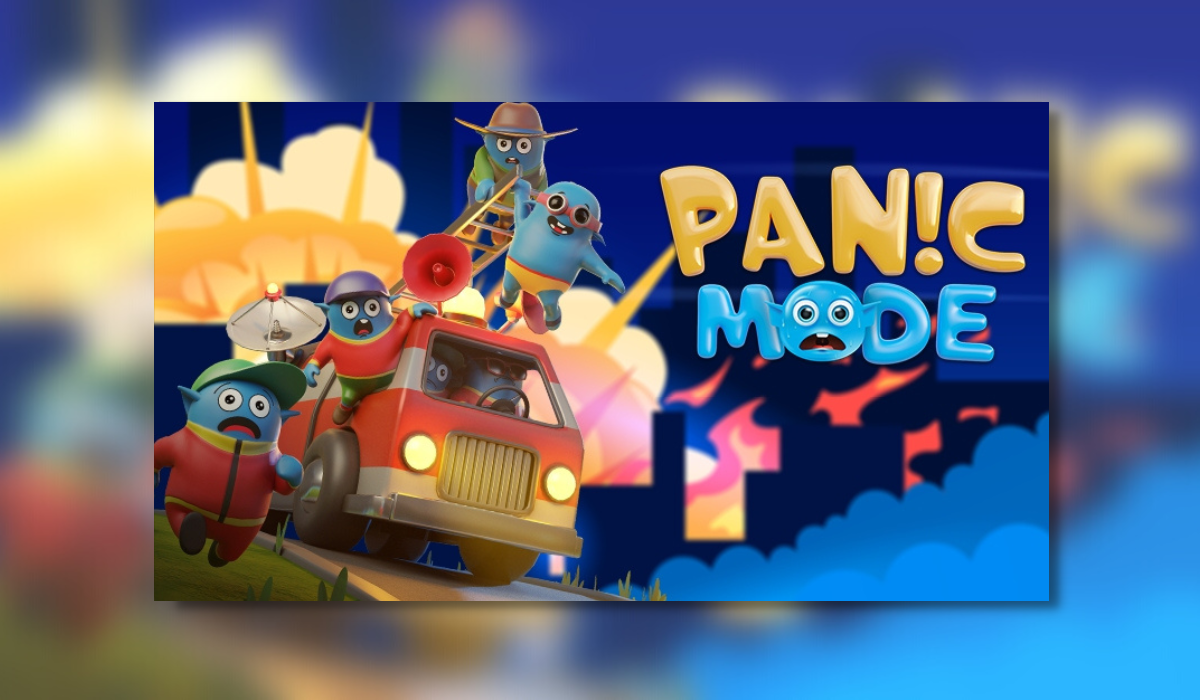 Panic Mode is a 2.5D casual simulation game developed and published by MobiusCode. As far as I can tell, MobiusCode are the new kids on the block with only 2 games to their name; the other being Exotic Matter – a Sci-Fi sandbox adventure game. With only 10 user reviews on steam since it’s release in 2021, it’s fair to say that Mobius are still building their following. With this in mind, let’s dive in and take a look at Panic Mode.

“Try your luck as a disaster manager and save the cute but clumsy Pammies from harm’s way”. Using your contraptions, common sense and zero experience on the job, can you save the Pammies from crisis?

In Panic Mode, we play as an intern safety inspector. It’s our job to implement safety protocols and run drills in surrounding businesses. Protocols and drills include; placing smoke alarms and fire extinguishers, and then seeing if the ‘Pammies’ have enough time to react when a fire is detected. 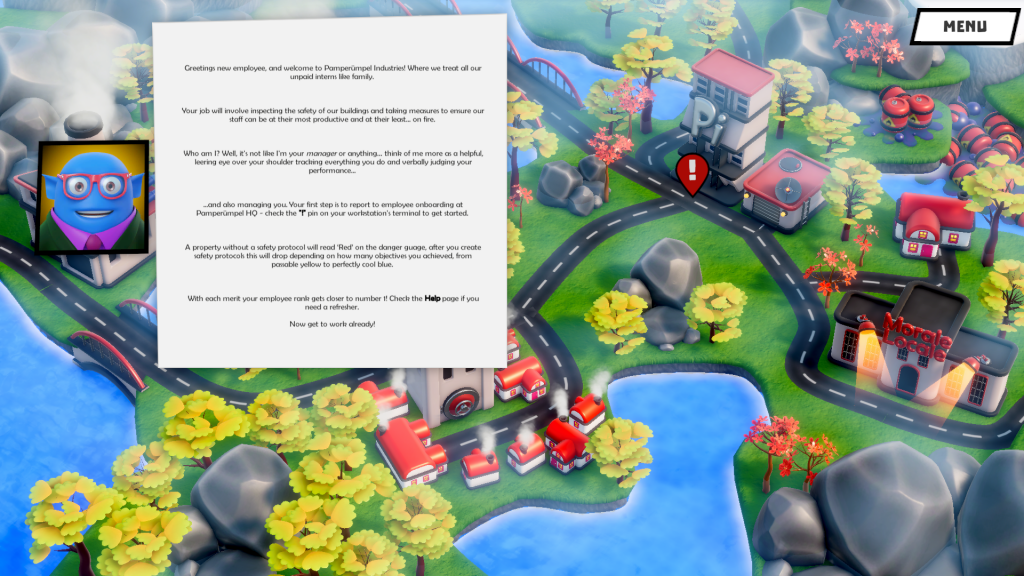 Each level has it’s own objectives that need to be completed, such as at least x number of Pammies must survive. Whether a Pammie survives or not depends on if they make it to the designated safety area before their health bar runs out and they burn to death – pretty gruesome, right? Don’t worry though, it’s not as graphic as it sounds!

To succeed in Panic Mode, players must consider things like building layout, number of doors, wall placement and vents. For example vents allow smoke to pass through easily, which can be useful when placing smoke alarms and detectors in side rooms. 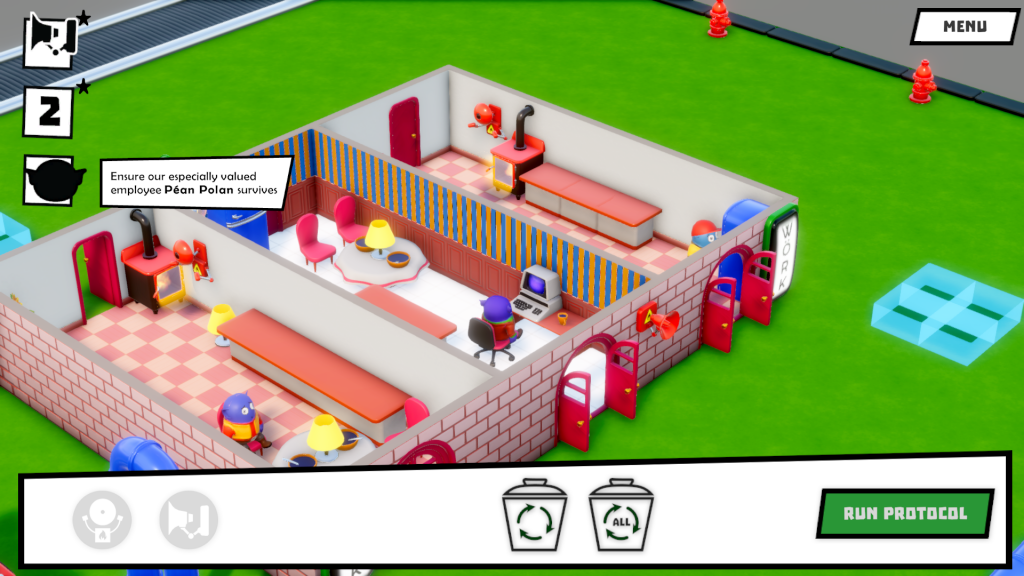 On a bit of a side note, Panic Mode kind of makes us more aware of safety protocols in our own work business and home, without us actually realising. We’re passively being taught a thing or two about fire safety – pretty neat! As far as I can tell, we’re only offered one game mode, which is a campaign. There are no multiplayer modes or mini-games at this moment in time.

Boasting a simple cell-shaded 3D art style, the title offers a cute cartoony feel that really fits with the gameplay. Photorealism in a game where characters literally burn to death might change the vibe a little, not to mention the age rating. 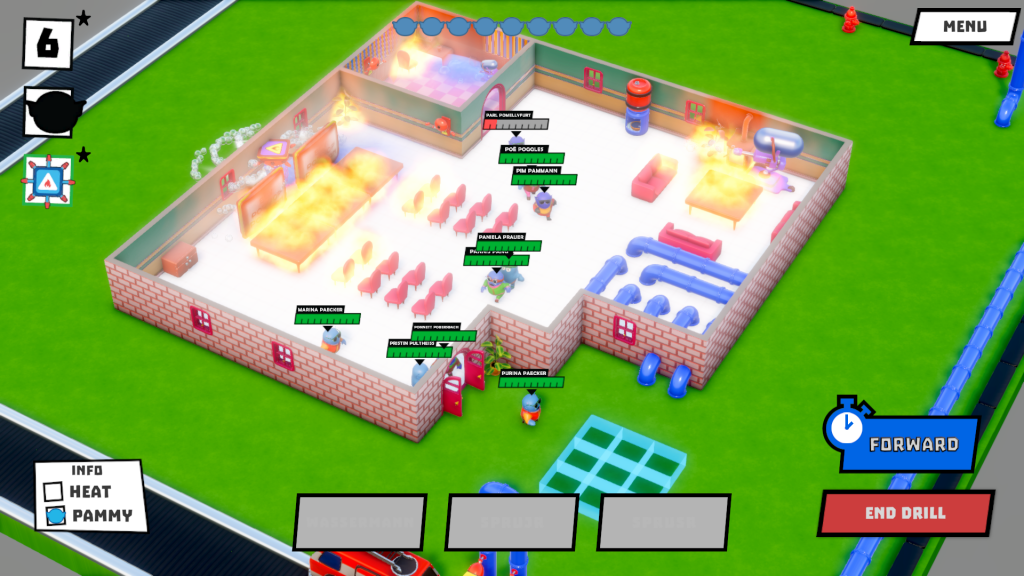 There’s not really much to say here, other than multiplayer would really help. If you check the steam metrics, you’ll see that Panic Mode doesn’t have much of a player count. Introducing some sort of competitive, or even cooperative element might make the game more appealing. Heading down the party-game route might have been a better option for this one as it would entice more gamers to add this to their library.

It looks like a combination of lack of marketing and a fairly steep price tag (£9.29) has caused Panic Mode to slip under the radar. This could be down to the development team’s lack of experience maybe?

Focusing on the positive side, MobiusCode has delivered a polished title. While it may be small and flying unnoticed, it’s hard to pick faults with what’s there. Panic Mode plays well, does what it says in the tin and keeps you entertained when you just want to chill out and play something solo and casual. I award Panic Mode a Thumb Culture Bronze award.