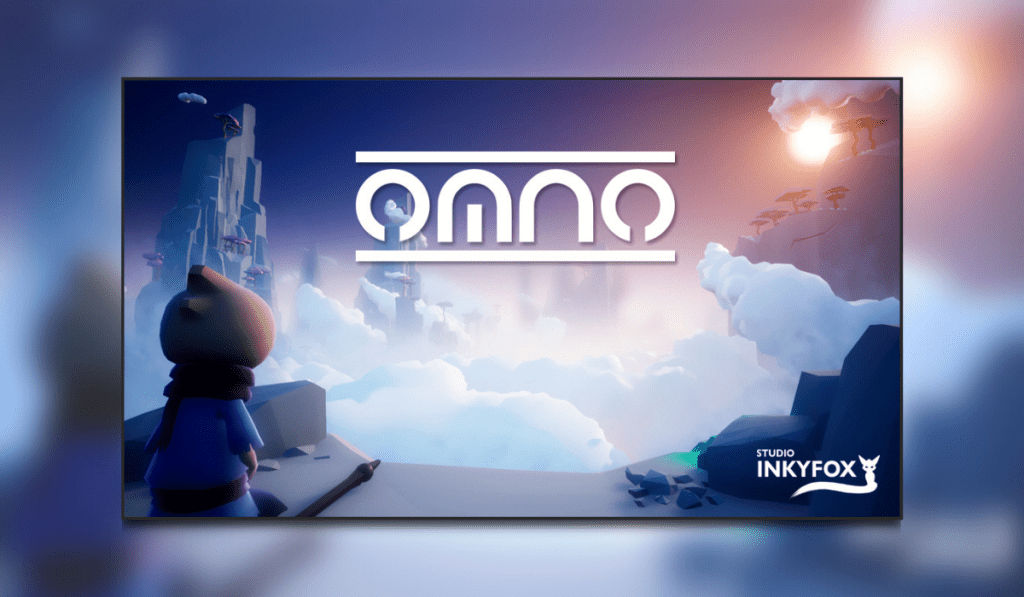 Omno is a stunning-looking game developed by Jonas Manke aka StudioInkyfox, a solo indie dev from Germany. It recently became available on the Nintendo Switch and has been available on other platforms for a few months prior. The game is an atmospheric adventure about a journey of discovery through an ancient world of wonders.

Omno, a perfect game for the Nintendo Switch?

Omno first came onto my gaming radar when I saw it on the Xbox Game Pass page. The graphics looked lovely and the trailer stood out. Being quite limited on space though with my Xbox Series S (thanks Microsoft for making the only proper storage expansion far too expensive for what you actually get) I am almost completely maxed out on some rather humongous graphics intense games. Seeing that this was then coming out on the Nintendo Switch, my sole intention was that I needed to play it on that. It looked like it has the potential to be the perfect game to play on a handheld device. I have the storage and the only game I could potentially get distracted by is Pokemon Brilliant Diamond that I reviewed the other week.

The gameplay starts off with your character only being able to jump which makes exploration a bit of a bore. The scenery looks stunning, but you can only do so much. It’s not a complaint, just an observation. As you go through, each level brings a new ability, adding another dimension to exploration and completing some challenges. The easing into each ability works well, as you can complete each level 100% with whatever abilities are available to you at the time. Once you have your full range of abilities, expect to use them all to get to 100% achievements in a level.

On the topic of abilities, the few that you do unlock really enhance the gameplay. There’s surfing, where you hop on your stick and can whizz around the place; teleportation, where you don’t teleport so much as getting flung over to a selected point on a map, so long as you have a direct line of sight to a teleportation point; dash where you throw yourself forward a few feet; and finally float, which doesn’t need much explanation (although the rest probably didn’t need explaining either, really). 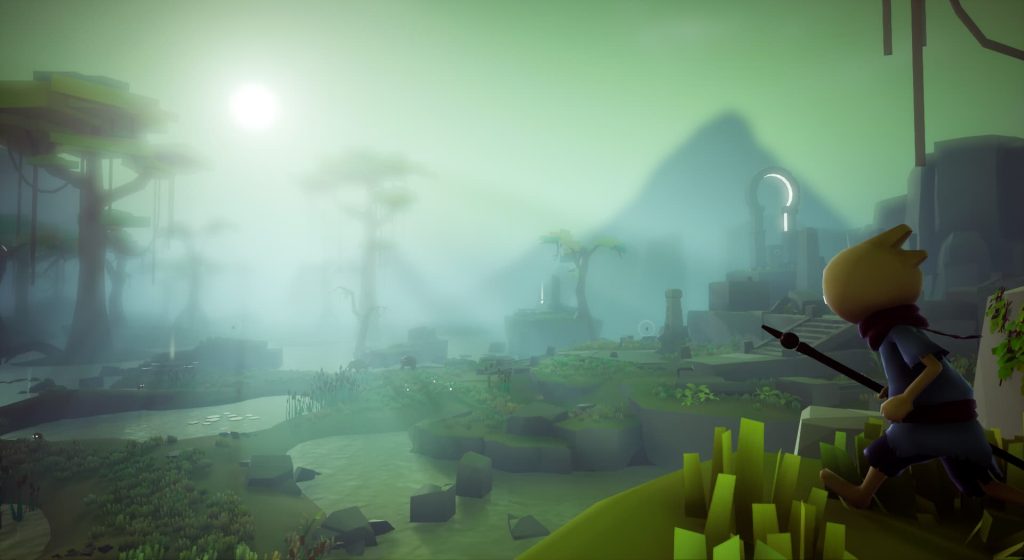 There’s nothing overly challenging to any of the puzzles. Most of the time, problems are in not timing a jump right or not dashing at the height of a jump to reach a ledge. It’s simple, which is fine. It provides a nice and chill experience where you don’t have to put too much thought into anything. The only challenge at times was finding out that you haven’t found a rune and wondering where that is since you haven’t seen one you’ve missed. You can easily find where the energy balls are thanks to your staff providing you locations, but the runes you need to actually find by yourself.

In addition to collecting the runes and energy balls, you also build up a collection of any animals you come across. The encyclopedic nature of the animal discovery is a fun addition and gets counted towards that 100% completion total for a level. It’s a nice little addition that I quite liked.

The only problem with the game was that you can’t die. If you jump off a cliff you just land on your face and bounce back up. If you fall off the side of the area you’re on, you just pop back up at your last checkpoint, keeping everything you’d done before you took that apparent, but definitely not a suicide dive. I get what developer Jonas Manke was going for, it’s a relaxing puzzle game that’s aimed for comfort. It delivers on that, but the option to turn on a level of hardness would have been a welcome addition. Knowing that if I died then I’d lose any progress I’d made beyond a certain point would have given the game another dimension. 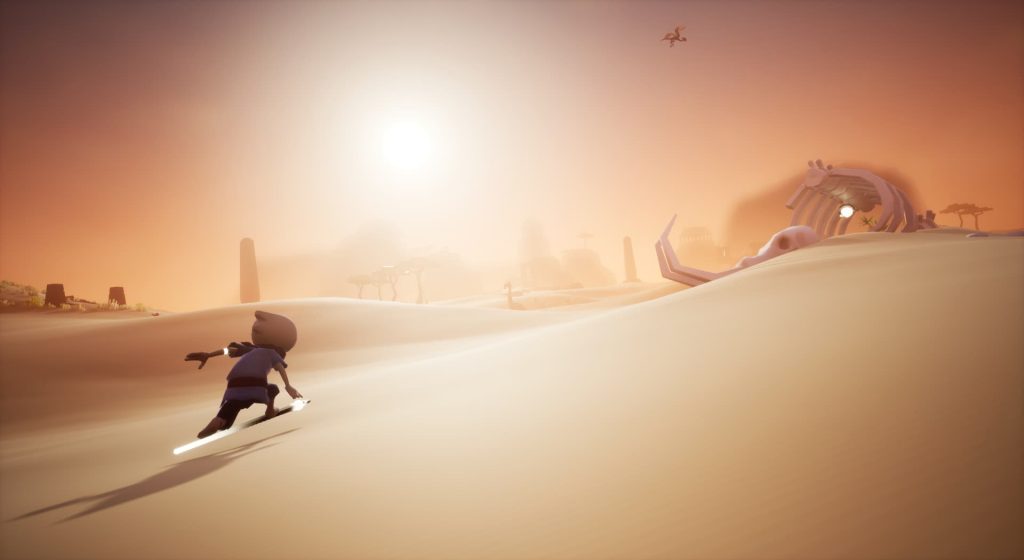 Graphically the game is stunning. There’s nothing complex about it. It’s simple, but it’s simple graphics done right. The animals are wonderfully crafted and seeing some of them flying around or hopping around on the floor is really beautiful. The design work that went into the animals is superb. Seeing them interact with the world and even your character is quite special.

When you see games released on other consoles and PC months before coming to the Switch, there’s always that worry that it’s not going to run as smoothly. I love the Switch, it’s a brilliant device, but it’s hardly a powerful console. So, it’s reasonable to occasionally worry that games that look beautiful could have a few stutters here and there. Thankfully that’s not the case here, at least not that I saw.

The music is quite relaxing, which is suitable for a puzzle game that isn’t taxing to the brain. It’s almost meditative. In addition, the animals all make noises that just add to their brilliant designs. 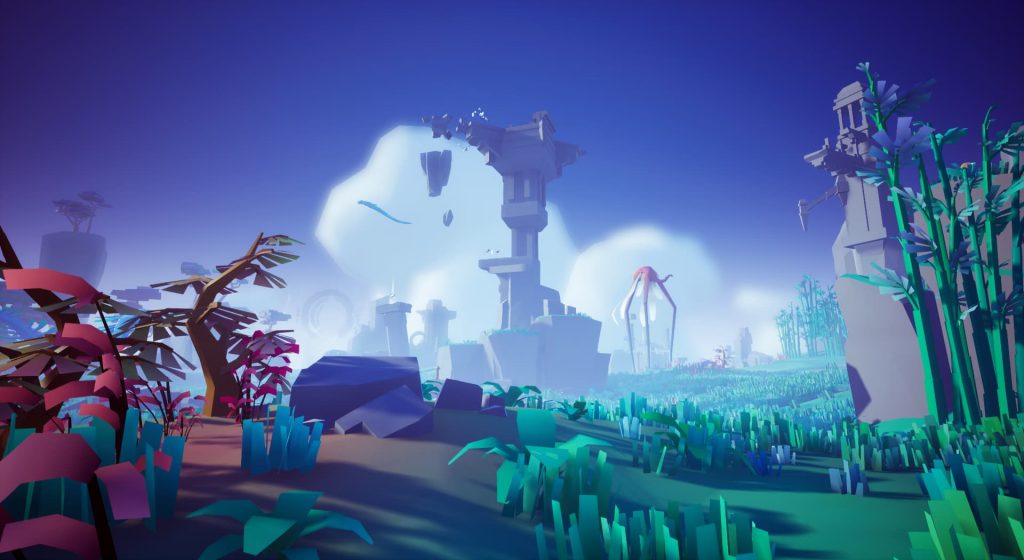 Omno is short. Really short. I completed the game fully in less than 4 hours. Granted, I could have played a bit longer and just admired the scenery. But there are only so many screenshots I can take, and I did take a lot.

I could have completed the game quicker, but I wanted 100% on every level before I moved on to the next. Especially since you can complete each level fully before moving on. So that meant finding all the animals (dead easy) and all the runes (mostly easy apart from one or two I just couldn’t see even though they weren’t hidden). Adding some extra parts that you can’t do initially would be beneficial. So many good games don’t allow you to complete everything in one go which allows for a re-run. Little additions like giving your character a health bar would also make gameplay a bit longer. As it is though, it’s so easy to complete the game fully in little time.

Realistically though, the only thing that will mean you take your time with Omno is looking at the gorgeous scenery of the game. 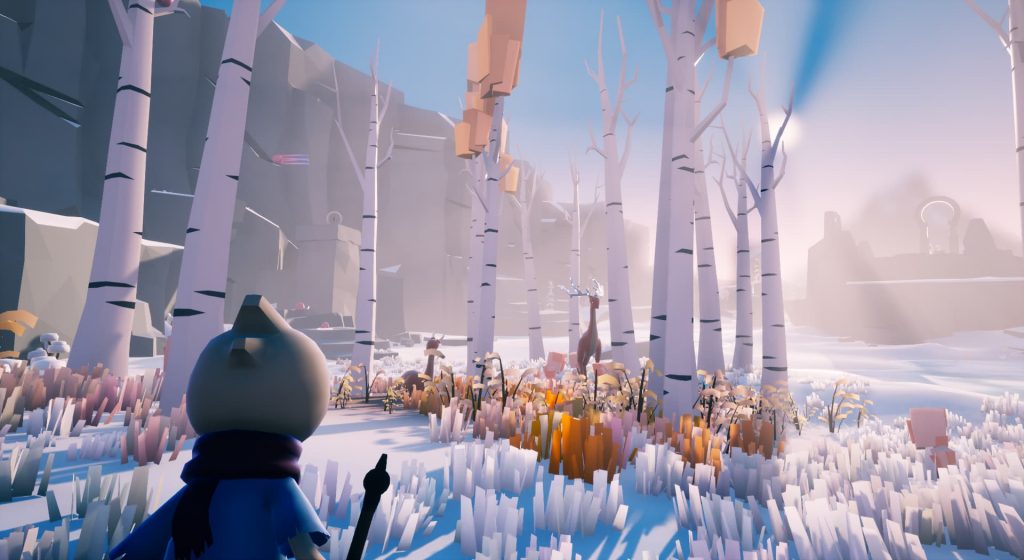 If you’re looking for a nice relaxing puzzle game that is aimed at your comfort instead of making you really think, then Omno will hit the mark. I found it really enjoyable and a nice change of pace from some of the other games I’ve been playing. The gorgeous environments are up there with some of the best-looking games I’ve played.

There’s nothing to blow you away though, but there are lots that will leave you impressed. Sure, I’d like there to be more. More gameplay for a longer experience. A choice of difficulty, like the ability to die and have to start again. More challenging puzzles. More of that stunning scenery. It does leave you wanting more in both good and bad ways. Overall though, it’s still an enjoyable way to pass the time and give yourself a break from more challenging games. It’s delivered with some of the best simplistic graphics you’ll ever see in a game that had me hitting the screenshot button more than I have ever done previously.

For the Nintendo Switch, it’s almost perfect. Handles brilliantly, it looks beautiful and gives you a relaxing time whilst puzzle solving. It is the kind of game that I couldn’t imagine playing on a powerhouse like the PS5 or Xbox Series X. On the Nintendo Switch though it’s a perfect fit. Just wish there was a bit more gameplay so that I wasn’t 100% complete on everything within 5 hours.

I give Omno the Thumb Culture Gold Award! 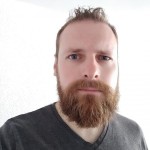