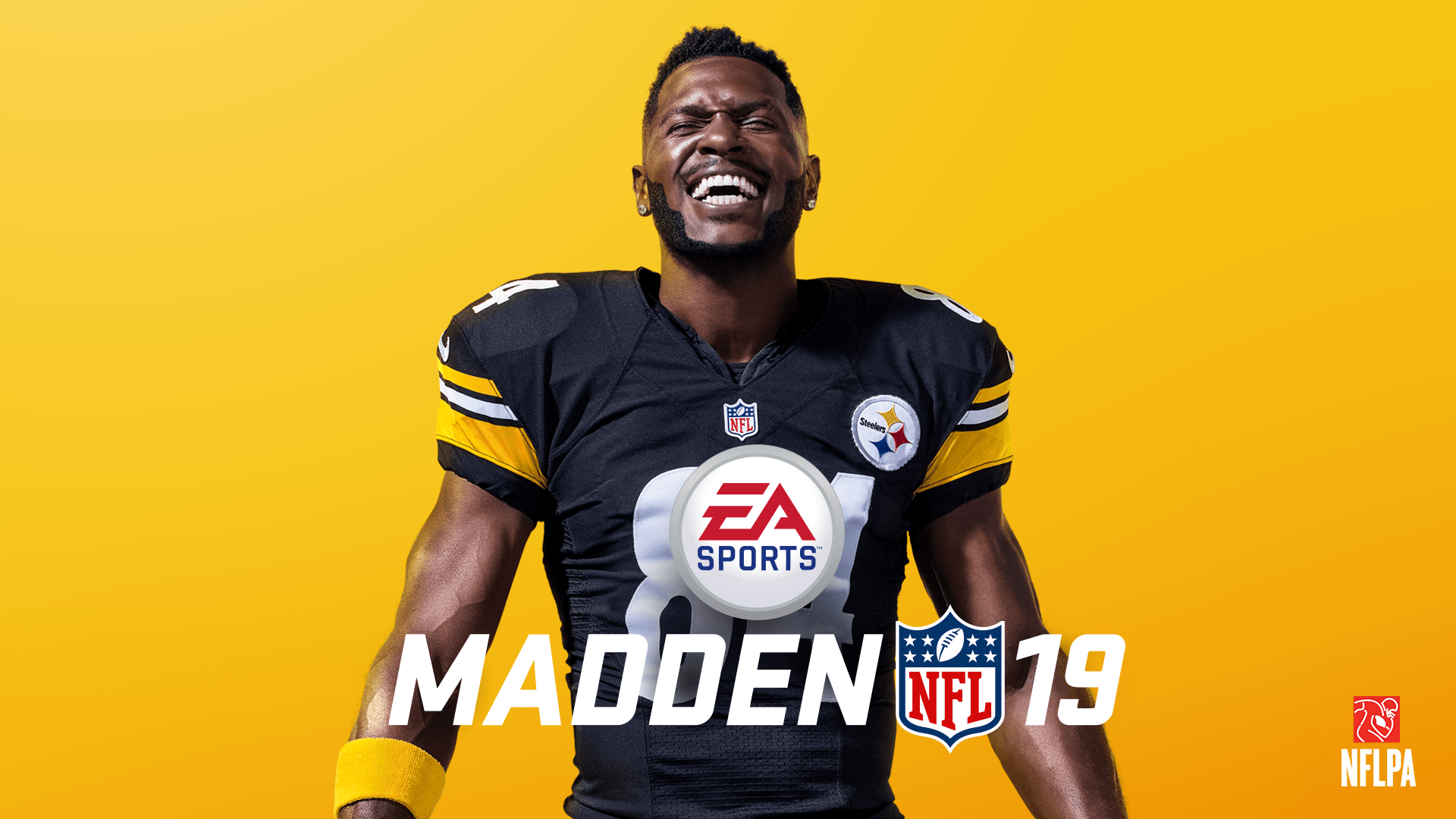 It’s that time of year again with summer pretty much over when the guys at EA Sports  unleash the latest editions of their behemoth like sports franchises. Always first off the starting blocks (despite starting after the proper football season -soccer to our American cousins) is the latest Madden. So does Madden NFL 19 mark a paradigm shift in the series or is it a case of another year of marginal gains. Put on your shoulder pads, strap on your helmet (oo’er missus) and join me to find out whether Madden NFL 19 scores a touchdown or is ruled incomplete! 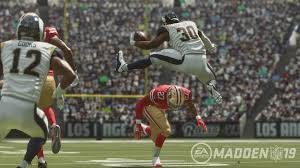 The biggest change to gameplay in Madden NFL 19 is the introduction of ‘Real Player Motion’. This key game enhancement makes the players more controllable and a flick of the sticks can give a change of speed, cuts and dodges on offense and much more control and proactivity on the defensive side. Players signature moves and playing styles are now more evident than in any previous Madden. Your stick skills effortlessly translate to the screen and the players are the most reactive to date. The ability to control players celebration adds to the fun. The realism factor has truly been pumped up to 11. ‘Real Player Motion’ has quite rightly been trumpeted by EA as this years key enhancement.

The usual game modes are present and correct. Aside from the pick up and play exhibition mode the three main game modes are Franchise, Madden Ultimate Team (‘MUT’) and Longshot:Homecoming. The latter is a continuation of the story mode introduced in Madden 18 which is in the vein of FIFA’s ‘the Journey’.

Franchise mode is, as usual,  where you take on the role of coach of your favourite NFL team and try to lead them to lifting the Lombardi trophy and Superbowl glory. New this year is the addition of schemes. You have a simple choice of choosing a defensive or offensive scheme. This is very much one for the casual gamer as it assists you to find the best player trades and free agents to fit your chosen scheme. Player upgrades are also tailored to the particular scheme you choose. You start off in pre-season playing warm up games and fine tuning your roster. Weekly training not only helps you upgrade your players but also practice key plays. In-game play choice is now far more forgiving. You are able to deviate from chosen plays and can choose to run the ball instead of the passing play you chose pre-play. This is very useful if your attention wanders and you press x before actually properly considering your next play. For those not completely familiar with tactics and plays you also receive a community suggested play which is based on the stastical likelihood of your particular opponents likely play. For the more seasoned you are free to run any of the countless available offensive and defensive plays as you see fit. The ability to change tactics on the fly is invaluable if your pre-selection was the wrong call. A welcome addition to Franchise mode in Madden NFL 19 is the ability to create your own roster classes. These can be saved and shared with the wider Madden community. As time goes on downloadable rosters will no doubt see the cream of the College players be available for your franchise. With 450 roster spaces in each class the possibilities are endless. 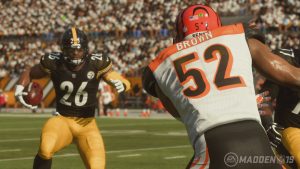 MUT inevitabley returns and the usual pack collecting fun awaits. The introduction of solo challenges greatly improves the mode and offers more chances to earn points to put towards those all important packs. There is a liberal sprinkling of Hall of Famers and with a bit of work (and the inevitable grinding) you can create your dream fantasy roster. As the regular season progresses solo challenges will give you the opportunity to pit your MUT roster against teams created by Madden Devs, NFL players and celebrities. You can upgrade your MUT players to suit your scheme and find the perfect combination to create an all conquering team. Upgrades are not permanent and cards can be downgraded and points and upgrades used elsewhere. For those who get attached to particular cards you have the ability to upgrade a card from a 60 to a 90 rating with a bit of work.

The use of the Frostbite engine in Madden 18 enabled the introduction of the first story mode in Madden history . Longshot followed the fortunes of Devin Wade and Colt Cruise as they tried to make it in the NFL. The two protagonists return in Madden NFL 19 in Longshot: Homecoming. This 3 hour long story acts as a kind of tutorial mode and although well acted lacks replayability for me. It reminded me in a way of Life is Strange and will be an interesting diversion from the main game for some. The lack of dialogue choices does make it fairly linear however. I myself am not a big fan of these sorts of mode but some players will enjoy the story especially if they played the first chapter in Madden 18.

Madden 18 saw the series use the fabled Frostbite engine for the first time and you would think there was not really anywhere for Madden NFL 19 to go in terms of improving the graphics. Real Player Motion does however enhance the game and give it a slicker more realistic look than last years version. The player likenesses are consistently spot on throughout the game from on the field through to the pre-match menus. Longshot:Homecoming looks fantastic and is like a mini-movie. The whole presentation of the game is spot on and the TV show feel is well executed. Madden NFL 19 is arguably the best looking Madden game to date.

The cheers of the crowd, the intros and razamatazz of each game are perfectly replicated by the game’s audio. The grunts of the players and the crunch of the tackles really give you a sense of being in the thick of the action. As with previous Madden iterations Madden NFL 19  is presented in a TV show format. With this styling comes the inevitable and extensive use of pundits and TV style commentary. Brandon Gaudin and Charles Davis once again provide the ingame commentary with Jonathan Couchman covering the pre-game presentation. This is all well and good, however there are times when the commentary bears absolutely no relation to what is going on on the field of play. For example in one of my pre-season games I scored a stunning touch down (naturally ;-)) only to have a flag thrown on the field and a penaly awarded against me. The score was chalked off however the commentators went on to discuss how my early touch down had swung the momentum of the game into my teams favour! Hopefully bugs such as this will be dealt with in future updates. Whilst the commentary isn’t terrible it can get quite annoying. It does add to the TV program feel of the game and will appeal to the die hard fan and lovers of statistics and in-depth discussions of tactics. The menu music is the usual mix of Hip Hop and RnB and is varied enough to not get annoying. Not my usual music choice but a couple of the tracks are beginning to grow on me! 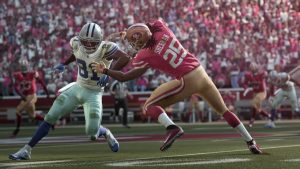 With franchise mode and MUT there is plenty to get your teeth into. With the new schemes system you can spend hours fine tuning your franchise. MUT as always offers hours of gameplay although it can get a bit grindy at times. As the season progresses the real world will have a direct effect on the available challenges and updates will reflect what is going on in the real life NFL. It is very easy to get heavily engrossed in both your franchise and your MUT rosters offering playability for the entire season and beyond. The nature of the EA sports franchises finds some players skip a year as they are loath to start over in either game mode. The game is very addictive and rewards you the more you play especially in MUT mode. 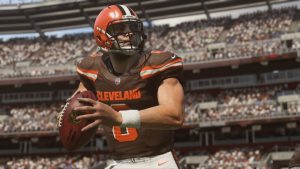 In conclusion NFL Madden 19 is an improvement on Madden NFL 18 but not the huge jump seen from Madden 17 to 18. Real player motion alone is reason to buy this years version as it makes the game the most fluid and responsive Madden to date. It doesn’t match up to the seismic changes seen in Madden 18 but there is enough (other than the yearly roster update and player rating updates) to justify picking up this years version if you are a fan of the gridiron.

Therefore Madden NFL 19 gets a Thumb Culture Gold award as it appeals to the die hard fan and the casual gamer alike and visually is stunning.