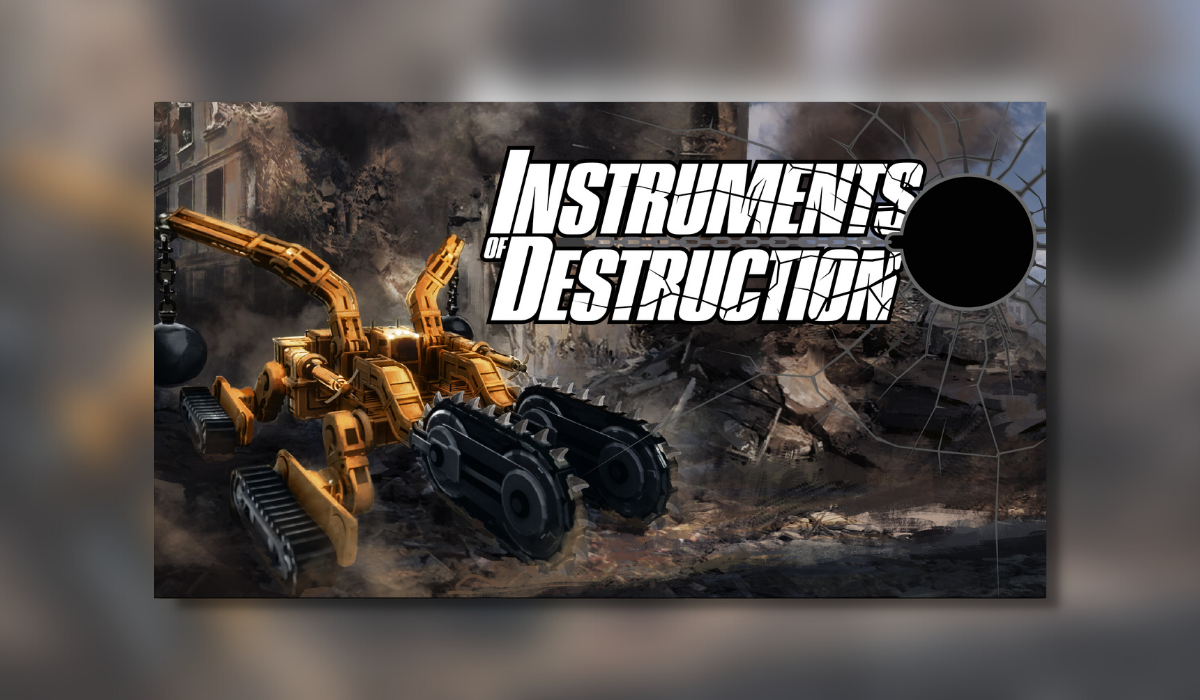 Instruments of Destruction by Illinois-based devs Radiangames is a single-player vehicle building sim that has you creating machines to knock down structures. Available on PC and currently in early access, the destruction seems slightly familiar for some reason upon first glance.

Let’s check out what the mayhem is all about! If you enjoy reading my article, feel free to take a look at my others here. Remember we have a discord channel that you can join which is a friendly place where we talk not only about games and tech but also the latest deals and anything else that’s on peoples’ minds!

A game about creating a vehicle and trying to knock down structures, and boy do these structures come down in a very realistic way. Before I even did my research there was something distinct about the collapses of the buildings. The way they seemed to conform to the law of physics was one of the biggest ones.

I was pleasantly surprised to find that Radiangames was in fact a one-man studio with Luke Schneider behind it all. Luke had previously worked for Outrage Games and Volition as a lead designer while working on Red Faction II and Red Faction: Guerrilla. Here lies where the passion and love of destruction comes from!

Instruments of Destruction, as mentioned earlier is a single-player game that features a campaign and sandbox mode. In the campaign, you start with a basic array of unlocked parts that you can use to craft your own vehicle. If that doesn’t appeal straight away then you can call in one of the ready-made machines and set straight to work.

The campaign is spread across a series of islands that each have their own goal such as destroying a specific structure, levelling the area of collecting a number of items that drop when an object is smashed. There are no lives to worry about. Should you turn your vehicle over or end up in the water then it is just an island restart. Once you have achieved your goal you are rewarded with progression to the next island as well as unlock new parts.

The vehicle building can seem daunting at first however it is actually not that tricky once you get going. Starting with a chassis block you then simply snap other parts to the available nodes that appear on the block you want to connect to. Suspension arms can be added along with wheels of various size and type. Be mindful that you have the powered and steering wheels in the correct locations!

Once you have the chassis of your vehicle created you then get to add the Instruments of Destruction! While spinning blades can be fun you will unlock a vast array of menacing items as you progress including cannons and javelins! You can seriously unlock your inner Robot Wars designer out here.

With your ultimate nightmare created, which really only takes a few minutes depending on the level of intricacy you have gone for, you can go and test your creation on the next island. The physics are simply brilliant. What may have been looking like an amazing doom bringer can be easily rendered useless if you haven’t lifted the weapon off the ground enough, causing it to stove into the side of the landscape rather than be able to traverse merrily up the hill. Similarly, steering and drive are affected by the location, size and weight distribution. It is a great way to learn a bit more about physics for sure!

When you have the ultimate machine you will then feel very rewarded when you begin to see the structures smash to pieces and crumble as you batter them. The buildings tumble around you and fall in a very realistic way into pieces. The controls on the keyboard stretch further than the traditional WASD depending on what you have created. On/Off buttons for moving weapons such as grinders as well as pivot points for crane-like builds all come into play but are easily found on the screen.

Each of the islands in the campaign has a choice of three game modes: Normal, Challenge and Expert. The first option is the easiest, your builds are limited by either budget or weight limitations, while Challenge makes you use a prebuilt machine and adds some trickier bonus objectives. Expert adds a timer element to most of the levels, making you speed up.

Sandbox mode is what it sounds like. A place where you can drop structures or play a previous level, create any machine you want out of your unlocked parts and just let loose!

I was impressed with the level of detail when constructing the vehicles, giving you a real feel of playing with hunks of metal. Ultimately it is the destruction animations that give Instruments of Destruction its charm. It is so Red Faction. I love it. Debris and explosions fly across your screen. I experienced no lag or graphical issues while playing and its smoothness was amazing.

The soundtrack reminds me of the old 90’s arcade games and has a real synthy flavour to it. It goes well with the game and adds to the immersive fun that is going on around you. Similarly, the sound effects are spot on with the sound of buildings crumbling and barrels exploding into a firey mess.

Progressing through the campaign on normal mode will not take you that long. That said, the other difficulty modes will give you a challenge. The construction of the vehicles is just as fun as the actual destruction element and pushing the limits of what you can create and refining it can be a time sucker if you want to really go for it. There are some amazing prebuilts that you unlock at higher levels that really show off what can be achieved. Going forwards there are future plans to enable level editing as well as content sharing, something that would really bring the gaming community together for this title.

For a one-man studio, Radiangames has really come up with a fun and creative game that just captivates me. I have an engineering background but seriously, who doesn’t love smashing up buildings?! Even my four year old sat with me driving one of our homemade machines into buildings. It appeals to everyone.

Instruments of Destruction gets the Thumb Culture Platinum Award!