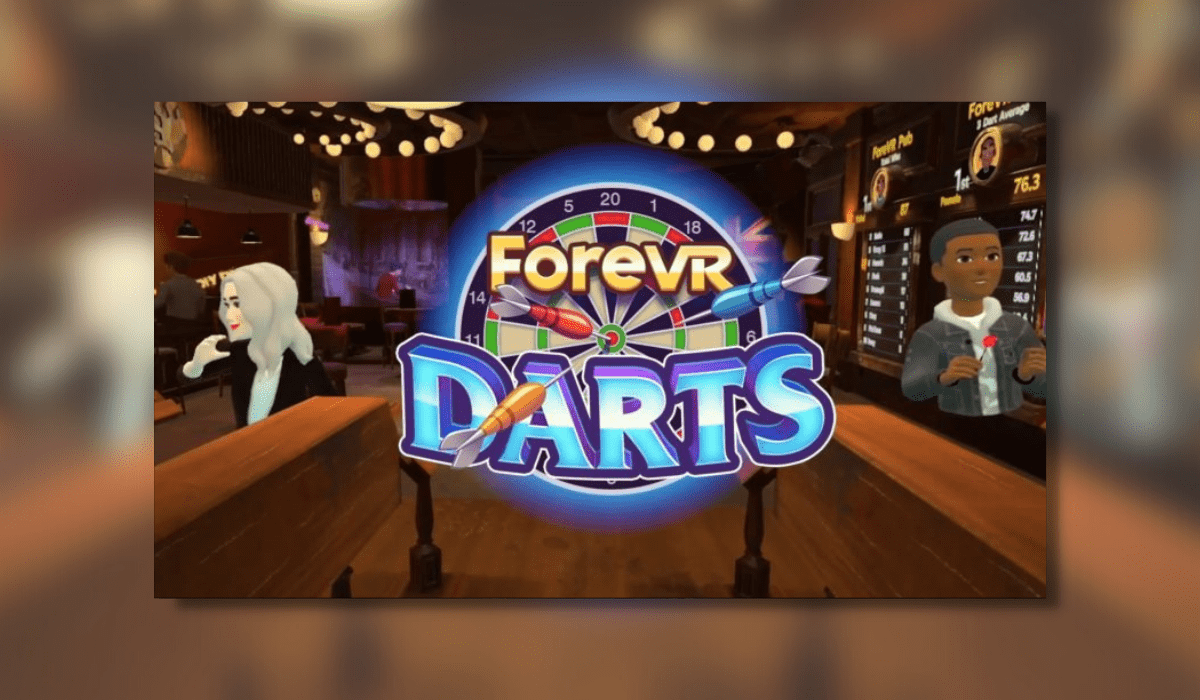 Known for their previous title Bowl, ForeVR have brought a new and exciting game to the forefront of pick up and play VR gaming. That game is non-other than ForeVR Darts. Available on the Oculus store now for only £7.99*. (*at the time of writing)

A Darts Game For Those Who Are Worried About Damaging A Wall Or a Human!

As I try to get my VR legs in place, I thought it would be wise to test out some of the more comfortable games available. I had VR sickness once and it knocked me out for quite a while. Come with me on my little adventure and if you have any other VR recommendations for those prone to sickness at the start, let us know in the comments below!

ForeVR Darts is a trip down your local for a couple of games with your mates. Except, if like me you are terrible at it, then this provides a safer environment. ForeVR start you off nice and easy, they drop you into the lobby and give you the tour. Showing you everything from how to play the game, to what else is available. From using hand tracking only, to how to use the hefty darts. Even if darts is not normally your thing there is a chance this game will be, as it has a lot to offer.

You can play online or against in-game characters with multiple difficulties available. Nothing like challenging the NPC at the bar to a game of darts and opening up a can of whoop-ass. Don’t get me wrong, I was on the easy mode but it was very satisfying. With each game, you level up your player, as you level up you unlock new darts. The darts in the game come in various shapes and sizes, not to mention weights and animations. You can really have some fun with your set-up and have 3 active sets of darts at any one time.

With various game modes available you can take ForeVR Darts as serious as you want. Or alternatively, make your time in the game as fun as you want. ForeVR Darts either way is great with family and friends and well worth checking out. One thing I do recommend is really exploring what is around you, and see what you can throw darts at. You might be surprised!

The graphics are what you would expect from a VR title like this, do you get ultra-realistic graphics, no. But do you get fun graphics that make you feel warm and lead up to one hell of an experience with friends and gamers alike, YES! The graphics provide a fantastic environment for some online gaming. Winter is cold and some people are struggling for time these days as well, making use of titles like ForeVR Darts bring a bit of excitement into gaming.

When it comes to the audio, you are fully immersed in the online world provided by ForeVR. The soundtrack only adds to this, so much so that it just blends into the VR experience. That isn’t to say that the fun and charming audio tracks go un-noticeable. However, they become part of the adventure you are about to embark upon. Albeit a short walk to the hockey.

It is quite evident that ForeVR know how to create a game that keep gamers playing. As we have seen with ForeVR Bowl, ForeVR Darts is no different. It’s a game you can pick up and play for hours on end solo, refining your skills and unlocking new darts. However, it is also a game to bring to a VR party. ForeVR has solved the problem of which VR title to play with larger groups of people. The problem that now needs solving is how to do we get multiple VR headsets in single households to truly bring VR to the party?!

From picking up ForeVR Darts to now, I have no doubt that this game will be staying in my library. From the fun lobbies, to the games and even the environment you are surrounded by. This all makes up one hell of an experience. If someone said to me, recommend some fun games for the Quest 2, ForeVR Darts would be up there. It delivers exactly what a VR game should, an experience to remember. I, therefore, award ForeVR Darts a Thumb Culture Platinum Award.