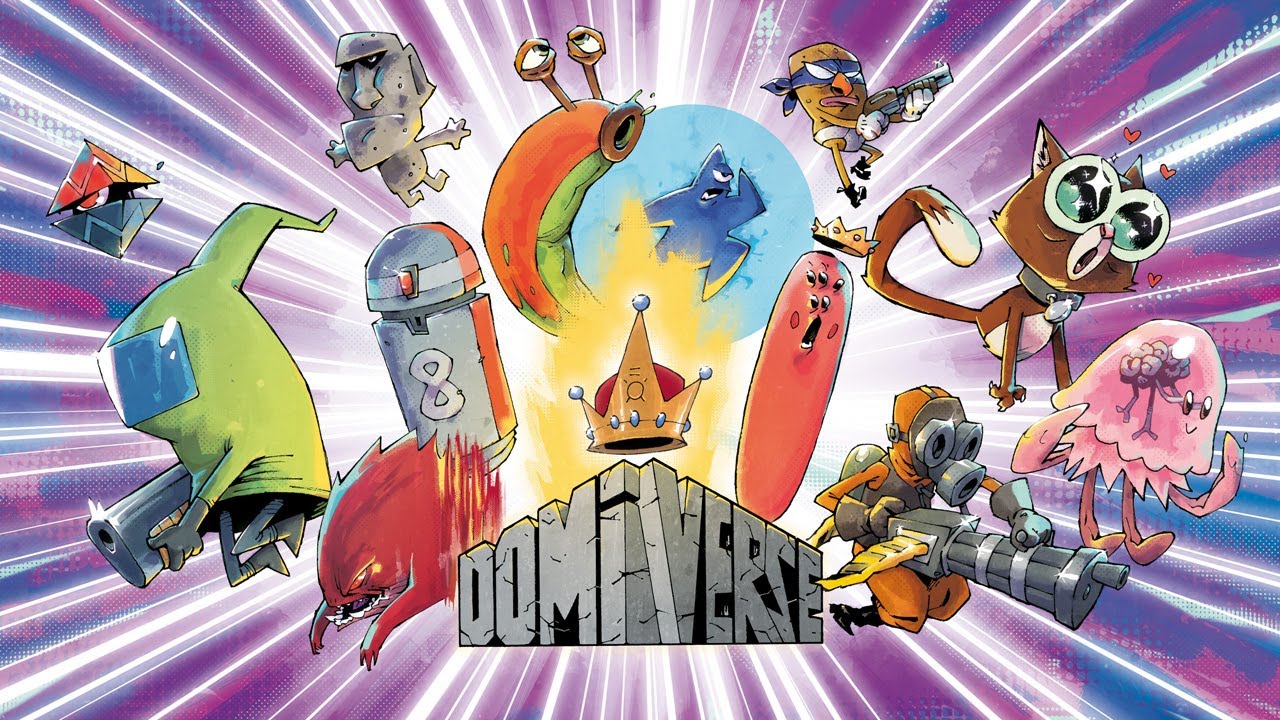 Domiverse is a multiplayer one-hit arena fighter which attempts to re-create the balance of chaos and fun achieved by games such as Super Smash Bros, and it’s Steam version has already amassed an army of fans. Is the Switch version worthy of universal praise or should it be chucked into a black hole?

Domiverse features a starting roster of 8 fighters, each of which is completely different in terms of appearance and skills. The drone-like W8T has the ability to hover around the arena, firing a 360-degree laser and leaving mines in its wake. The cat-serpent hybrid Snakity’s moves revolve around scratches and pounces and he can even paralyse players by turning on his feline charms.

The machine gun laser-welding, hazmat-equipped Xand can turn invisible, leaving behind an explosive decoy to fool the careless.

The diversity in player characters is a double-edged sword. Domiverse perhaps lacks the pick-up-and-play factor found in games where move sets are largely similar between different fighters, and some skills are tricky to master at first.

There are also balance issues, with fighters with melee-based moves having a hard time combating enemies with projectile weapons, in part due to some of the physical attacks committing you to fly across the arena once they’re triggered. I found Glomorf, who has a bouncing bomb-style projectile, particularly hard to deal with.

Domiverse features a single-player campaign which serves as a bit of a tour of the various modes and special stages on offer. Your goal is to be crowned ruler of the Domiverse through taking on levels which range from all-out every-man-for-himself brawls to Smash Bros-style target smashing.

The single-player campaign is fine but comes with some caveats. For one, enemy AI ranges between being brutally tough to hilariously dumb. Enemies frequently home in on lasers or spikes, and will occasionally stay completely still in the corner of an arena when their robotic brains conk out.

They are rather smarter when attacking, and the penultimate level of each run, which requires you to best three other fighters who are all gunning for you, can be incredibly difficult depending on which combatants you are pitted against, largely due to a single hit meaning failure. The structure of the single-player campaign also starts to feel a bit repetitive and it frustrating to get a game over at the final hurdle.

Fortunately, Domiverse features additional modes which revolve around smashing targets or reaching a goal, and these are nicely tailored to each character move set. In some ways, these modes represent your best opportunity to learn how to use each contestant to the best of their advantage.

The main attraction of Domiverse is undoubtedly multiplayer. Up to four players can compete locally, although disappointingly there’s no online play at this time. Fights are fun and the vastly different characters help to keep things fresh.

Domiverse joins the likes of Towerfall and Gang Beasts as a games night staple, and battles will likely become more competitive as players discover characters which suit their play-style. It should be noted that while the game runs perfectly in handheld tabletop mode, the character sprites are so small it can be hard to track what’s going on.

This means generally you’ll have a better time playing with the Switch in the dock. That does limit Domiverse’s appeal as a portable title, although given there are no visual compromises there’s no technical reason to favour other versions.

Domiverse’s visuals are fantastic, with an admirable commitment to an engaging comic book aesthetic. Characters and stages are lovingly crafted and show a level of care and attention to detail which belies the limited colour palette and pixel count.

It must be said that if retro artwork in games turns you off Domiverse is unlikely to impress, but personally I feel the simplistic visuals help you to track what is going on, particularly in multiplayer matches where projectiles are ricocheting around the arena.

Haunted Tie has gone beyond the call of duty in terms of the overall presentation of Domiverse, having even created a series of expertly drawn unlockable graphic novellas which explain how each character was invited to join the tournament.

Unfortunately, the translation work throughout each of the comics (and indeed, the game as a whole) is woeful, which takes some of the shine off the wonderful artwork.

Larger sprites would have been nice, but I appreciate that smaller characters mean more space in which to battle, making for more competitive and strategic fights.

Domiverse has a moody electronic soundtrack which fits the futuristic action pretty well, with even the odd blast of sax to jazz things up a bit. The music does a lot to enhance the sci-fi atmosphere, although it does become a little repetitive during the target and run modes.

Sound effects do the job whilst being clipped and low enough in the mix to prevent four-player matches sounding like a confusing cacophony.

Domiverse potentially offers many hours of gameplay. There are unlockable playable characters, and completing the story mode for everyone is not an easy task. The target and run modes will be appreciated by anyone who enjoyed the non-combative moments of Smash Bros titles, and each character has five stages for each mode which has been designed with their skill-set in mind.

The multiplayer is obviously the main attraction, and if your friends appreciate what Domiverse has to offer it’ll likely be wheeled out again and again. At £12.99 you can’t go too far wrong.

I’ve enjoyed my time with Domiverse and will be encouraging my friends to battle against me at the next opportunity. A little more polish with the translation, along with an online mode and more balance between the fighters would have bagged Domiverse a more sparkly medal, but a Thumb Culture Silver Award is nevertheless nothing to be sniffed at. Well done, Haunted Tie!