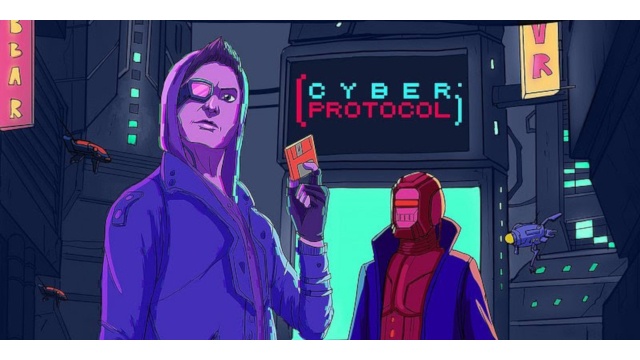 I was sitting on my sofa in a mundane area of North England when I loaded up Cyber Protocol, a Cyberpunk infused arcade puzzler by RedDeerGames. The opening sets the scene, and the soundtrack transported me to a world influenced by classic cinema such as Blade Runner.

I was a hacker, tasked with bringing G0X6 back to life by activating the protocol. I had no idea who G0X6 was and what the ‘protocol’ was but I was invested.  Starting the campaign, I hoped to feel like Mr Robot’s Elliot Alderson, a cool but socially awkward vigilante taking down E Corp, however that fantasy was quickly squashed. I had been thrown out of the Matrix, and the promise of a neo-futuristic world dissipated into a muggy September evening in the North of England. My adventure as a hacker started and finished before I could even dip my choccy HobNob into my brew.

Although the game has an intriguing setting and a well-produced opening scene, that’s all it is. This game is all about the core gameplay mechanic and nothing else. So if you’re after a game focused on dystopian future, look somewhere else because here you will find a solid, addictive arcade puzzler.

Red Deer Games offers two ways to enjoy the game, the single-player “story” mode or arcade, which you can play with up to four players. The game is a logic-based puzzler where you are tasked with collecting as many coins/tokens as possible before making it to the exit.

As your movement has to be sharp and precise, I found using the flimsy joy-con analogue to be problematic, however, using the A, B, X and Y buttons suited the gameplay perfectly. You shoot across the screen, like Pac-man on acid until you hit the wall, following this, you will need to observe your surroundings for hazards before making your way to the next point. As you progress, more hazards are introduced which adds to the difficulty of the game. The time-kill traps are a welcome addition as this minimises the time you have to observe the surroundings and forces you to play the game at a faster pace, which can lead to mistakes and countless retries.

Focusing on the arcade mode, here you select a difficulty and work through a set amount of levels to set a local and global high score. This is an addictive and competitive mode which is perfect to play on the go or at gatherings.

The game is an ode to retro games and that can be seen through the game’s black and neon graphical style. Those who grew up in the 80s will get a sense of nostalgia with the aesthetics of the game but that wore thin pretty quickly for me. I felt like the style could have developed more throughout the game and even linked more to the overarching story, however, even though the level design develops nicely, the aesthetics stay largely the same. There is an option to alter the themes but I still feel like this could have been elaborated further.

The music in Cyber Protocol is one of its stand out features. The Synthwave soundtrack is a joy to listen to and is the only element that draws you back to the cyberpunk setting. Red Deer Games have even included a music player as an option so you can just relax to music, which is a testament to the sheer quality of the soundtrack. The sound effects suit the 80s graphical style and are reminiscent of classic 80s arcade titles, thus anchoring the game firmly in the era.

There are 100 levels which develop in terms of difficulty and you are ranked on each level based on the amount of coins you collected and the time it took to complete the level. This, along with the two main modes makes the game replayable and completionists, in particular, will get a lot out of the game if they enjoy the core gameplay.

Cyber Protocol is a fun puzzler and is available on the Switch for £8.99, which is a suitable and attractive price point. The game has a lot of content and is challenging, due to this it will keep you occupied for hours. On top of this, it has a banging soundtrack, so I can definitely recommend the game. I award Cyber Protocol a Thumb Culture Silver Award!