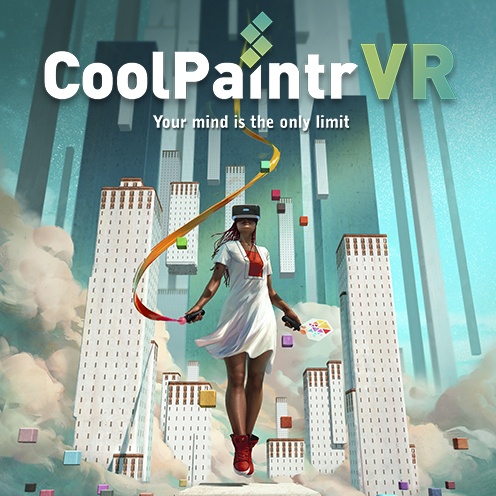 Video games can be like taking selfies with the filter switched on. It’s still you in there, but the version of you that you want the world to see. You play a driving game and get to live out your fantasies of being a racing driver, or getaway driver if that’s more your thing. A first person shooter will get you crawling through the battlefield, bravely leading team mates into the line of fire. A role playing game will have you walking the wasteland or exploring the mountains, all without leaving your house. Although CoolPaintr VR isn’t a game, its no different.

You go into it with a million ideas, creation at your fingertips and all of the power of VR to realise it. The only limitation is your imagination and you go in with the assumption that your imagination is limitless.

CoolPaintr VR from Wildbit Studios has the tagline Play, Create, Enjoy and having spent some time getting into it I think that subtitle fits it perfectly. It’s creative and fun.

PSVR fans have been looking for an experience like this and the title is greatly anticipated by users of the console who after a number of big ticket titles have started to get tired of wave after wave of, well, wave shooters.

CoolPaintr VR uses a move or Dualshock controller to give you control of a number of brushes and full pallet of colours which you can use to create anything within the 3-dimensional space you occupy. Using the move controller, the more you depress the trigger the broader the brush becomes, and you can choose to have different effects on the brush and different fill patterns. As well as colours and texture effects like smoke, shimmer and dust can be added to add another dimension to your creation.

The controls are intuitive, you can switch between brush mode and move mode, which allows you to pick up your artwork and move it or explore it.

It takes no time at all to get used to the controls and the move control that you see in VR is accurate, labelled with the controls and reacts to your input. Pull the trigger and the digital version moves, press the move button and the control scheme changes. You can place 3D shapes into your workspace, spheres and rectangles which act as a good base for whatever it is you want to build, but there is no option to paint on them or spray them

CoolPaintr VR look great in VR, you move around your design area in real time and with no judder or delay. When you pick up your creation, or zoom in and out, everything moves smoothly, but there is nothing here that should challenge a PS4. The area you can build in is small and the environment and draw distance are short.

There is no soundtrack to CoolPaintr VR, but you can stream in your own music through Spotify to keep you company in your design space. The incidental sounds that occur through menu selection and application of the paint are appropriate and help with the experience.

The tagline on the website claims “The only limit is your imagination”. Your imagination is one thing that will affect how long you spend playing it. The other is your ability to translate your imagination into [virtual] reality. After you place an item into the room, or freestyle paint something, there is no way to recolour or paint on it. There is no option to arm yourself with a pen or spray-gun and start doing graffiti, everything creates in 3 dimensions and I didn’t find that a natural way to play or be creative.

I was able to make a solar system in no time placing different sized and coloured spheres into the pitch black room and using the 3D paint brush to put rings around Saturn was a doddle, but there was no way to draw on the planets. My blue earth stayed simply blue, because there was no obvious way to add any landmass. Zooming and panning around my planets was good, but without being able to get in close and do the details, it left me feeling unsatisfied.

CoolPaintr VR is great at what it does. It looks good and has a clean and intuitive control system. When they said, the only limit is your imagination, I hadn’t realised how quickly my imagination would dry up. Creating things wasn’t fun, so I didn’t want to spend long in there trying to get the most out of it.

When I was young I had a software package that let you type in X, Y and Z co-ordinates to create 3D line drawings. It took forever, and the end result was cool, but the amount of work that went into it meant it wasn’t much fun and CoolPaintr VR left me feeling the same. I wanted a wall to spray on or a canvas to paint on. Maybe even a car to get artistic on, but that is not how this work. Like that tired old Amiga software this feels like rendering a 3D image you can move around and not much more. If you are into design and have talent, you could create great things in CoolPaintr VR, but if you just want to have a go at painting and being creative this is not for you. CoolPaintr VR gets a Bronze Thumb Culture Award.