Cloud Gardens is an incredibly relaxing, diorama creating puzzle game from Noio Games. Their first game since the excellent Kingdom franchise debuted; Cloud Gardens is what I like to call a seed ’em up. It’s an incredibly different pace compared to their more roguelite, tower defence style of the Kingdom games. Giving you small urban wastelands, that you can manipulate and grow plants in. Your goal is to populate and produce a diorama. That is until you achieve a certain level of foliage and you’re able to progress. You quickly realise Cloud Gardens is just an incredibly relaxing puzzle game, with some clever engine design too.

Cloud Gardens starts up and you’re just given a voxelised space to examine; it is up to you to work out how to play the game. In fact the first level is simply a stick, not much else to it at all. From here you notice you can grab at a seed which lands in your inventory. Place that seed and start the gameplay loop. Once a seed is placed you are given a selection of debris to flesh out the area.

It will take you 2 or 3 levels to really get to grips with the mechanics; in fact there isn’t much to them at all, but often you find yourselves distracted as you create random pieces of art. Once you learn to ignore your inner Neil Buchanan and focus on the puzzle element the game becomes very simple. That sounds like a bad thing, but in reality the game is that perfect blend of relaxing art and puzzle solving. It says a lot about the game when you notice you could have moved on to the next level about 20 minutes ago, but you’re busy changing that little corner you’re not quite happy with.

The combination of nature and mankind to scatter around the area, lends itself brilliantly to the mechanics. At first you think you’re trying to cover up ruins with nature, but in reality it really is about making a diorama or set piece that you’re happy with.

The truth is though that this game is somewhat of a one trick pony. You’re either going to get lost in this world and lose track of time, or you’re going to have seen everything after a handful of levels. I think there is room for growth though; one idea I had in mind is that they could add challenge modes where the birds start eating your seeds and you have to adapt and use other items to scare them away. The problem is every new game mode you can think of becomes the antithesis of Cloud Gardens greatest strength; relaxing, mindless gameplay.

There is also the option of a sandbox mode, which really does allow you to unleash yourself. There’s not a great deal of difference to the main puzzles, but you get to pick the size of your play space and use all of the debris you’ve unlocked from the main levels. This is a fun mode, but does lack some of the intrigue of the pre-defined levels as you’re given an empty space to work in.

As is the nature with any game that has pixelated or voxel graphics, it isn’t for everyone. Some people just cannot get on with graphics that show you every pixel. Personally I think it suits the game. That being said I do think there is more room for a better draw distance; as you zoom out things can start to look washed out. I also believe they could really embrace some complicated and large levels as I found these the most enjoyable to work my magic on.

It’s clear that you’ll never have an issue running this game. I suspect it will run on pretty much any device, and I think in the future this would work really well on mobile. The simple mechanics and visuals would make for a very satisfying game to tame idle hands.

There really isn’t much to the audio; however this is in the Cloud Gardens credit. The whole look and feel of the game lures you in to this sense of relaxation and zen, and as such the music is very chilled. On top of that you get the sound of the items you place and the odd birds flying around to enjoy your beautiful craftsmanship. I wouldn’t like to see this side of the game change as it perfectly compliments the tone of the game.

At the moment Cloud Gardens is in early access so it is hard to know just yet what the future holds. You can already see a small roadmap of the future in game, but it’s hard to know what else will evolve from that. As mentioned above I was full of ideas they could implement without impacting the core of the game. Equally I can see the modding community embracing Cloud Gardens too with new items, levels and graphics packs.

I do believe though that it is a telling sign that I lost a lot of time to just growing and expanding on my little dioramas, even though I was able to progress through the levels. I just found myself wanting to tweak and change my areas all the time until I was happy and that’s really the best part of the game.

It’s evident Cloud Gardens is in early access right now, only half the anticipated levels appear to be present and I think there is room to give the game a little more polish. That being said I am eagerly waiting for Steam to tell me about an update so I can see what more Noio Games has to offer. I believe with the right direction and the introduction of challenges or new modes this game has a very strong future. Given Noio Games track record with the Kingdom games, I don’t doubt for a second that they’ve got some great ideas up their sleeves.

I think if you’re looking for something to relax to that’s minimal effort and allows you to be creative then this is a game for you. 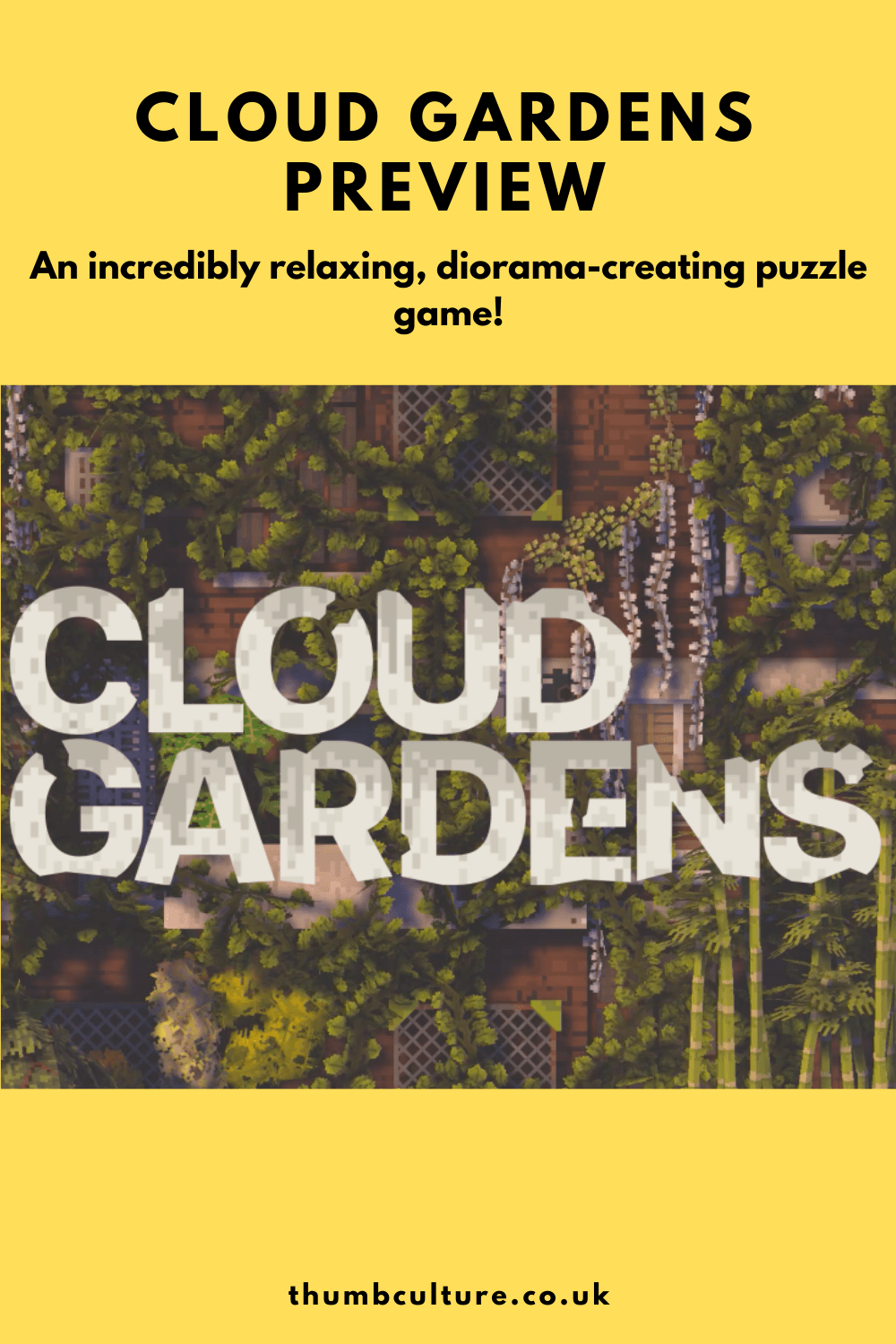