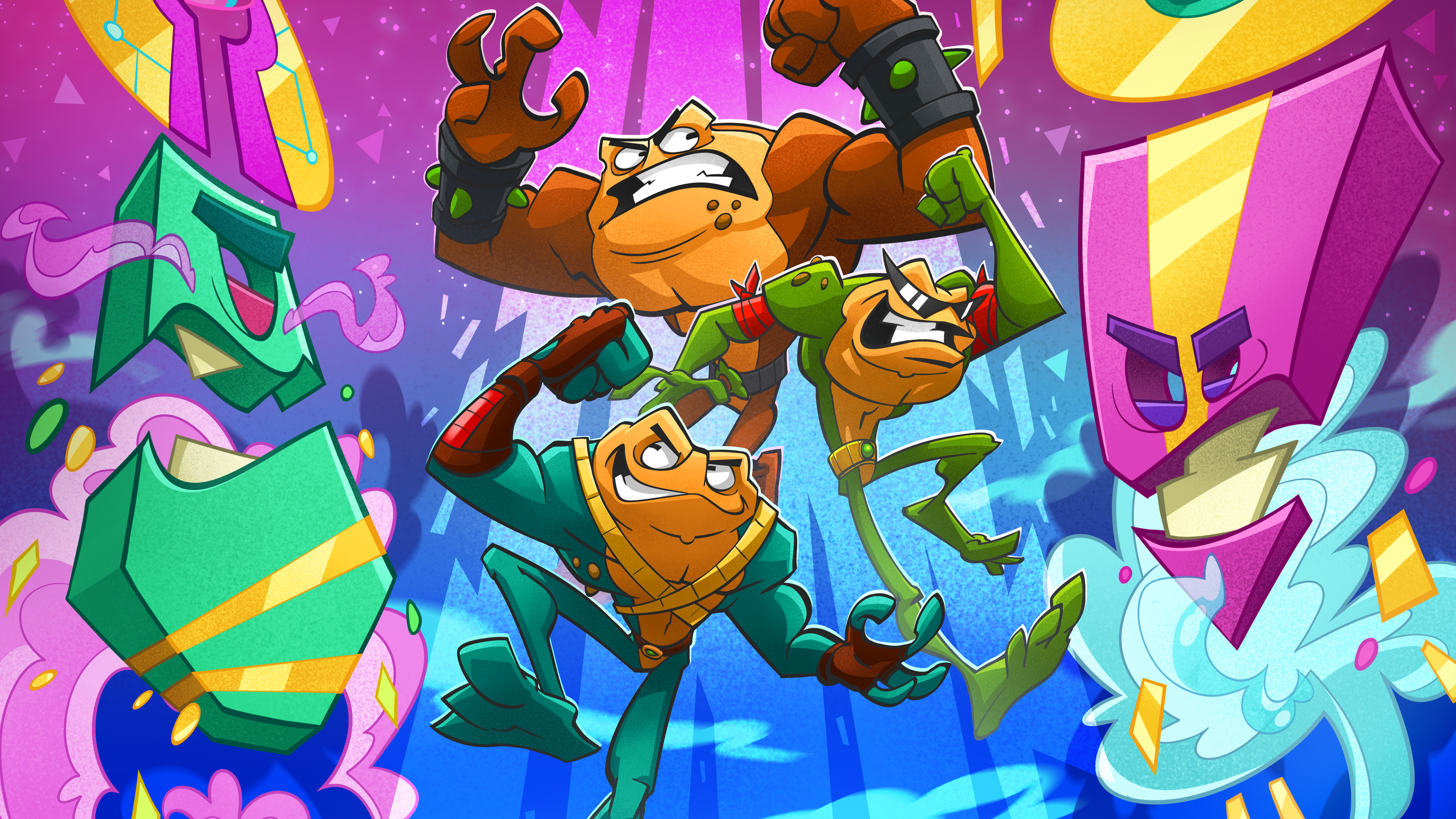 Every review I seem to write these days leaves me rattling on about nostalgia; and here I am reviewing Battletoads. Rare’s IP has been brought back to life by Dlala Studios, acting as both a sequel and a reboot to the series which has been absent since 1994. So here we are 26 years later, a new animation style and a whole range of mechanics crammed into 1 tidy package.

Battletoads puts you back in control of one of the titular heroes; Pimple, Rash or Zitz. Harkening back to the 90’s series, Battletoads main focus is that of a side-scrolling beat ’em up. Unlike the older games though there is a lot of other modes scattered throughout the campaign. Utilising the self-aware comedy and a modern animated style Dlala Studios has revived the IP with great success.

Each of the 3 protagonists is slightly different; albeit with the same basic control scheme. Rash is the quicker of the three, utilising longer combos but with each hit doing less damage. Pimple is the largest of the three and as such is focused on slower, higher damage combat. Finally of course Zitz, the leader of the group, lands somewhere in the middle. These subtle differences allow you to play how you like – either brute-forcing your way through a level as Pimple or nipping around the screen delivering a lot of hits as Rash.

The actual combat in these sections has some surprising depth to it. You have the standard attack; which is ultimately used to string together combos. There is an uppercut or launch attack that can help you juggle your enemies. Finally, there is a special attack which is often used to do a lengthier move that can deal damage to multiple foes at once. Depending on how you string these together will not only determine how quickly you dispatch the enemies, but also will present you with some unique animations. Throw in the mixture of foe types and you’ll find yourself having to plan out how you tackle an area.

Some enemies will electrify you and also the environment; especially dangerous when there are pools of liquid on the floor. Other enemies will be able to launch projectile weapons at you, whilst the most basic of troops will get in close to try and melee you. These antagonists, combined with the variety of attacks can lead to some tense fights as you pick away at your foes whilst trying to avoid taking damage. There are also some advanced techniques, such as a long-ranged bubblegum attack that effectively leaves foes stunned. Also, there is often the need to charge up your attacks to break defence.

Whilst it sounds like the combat uses a lot of known traits (and you’d be right to think that) it becomes a sum of all of its parts. The mix of level design, and the ability to jump to other sections of the arena, allow fights to never feel repetitive. It’s worth noting however that this is by far not the only gameplay Battletoads has to offer.

Fans of the original games will of course be familiar with the hoverbike levels. These were notoriously difficult levels, almost akin to a modern day infinity runner. The new Battletoads has changed the mould and has you driving in a third person view for these sections. Dodging from left to right, jumping and also avoiding pitfalls make these quite challenging and will be sure to leave you feeling a sense of reward as you succeed. Fortunately the designers were sensible enough to not throw these at you mercilessly and they don’t ever overstay their welcome.

But that’s not all – there’s more. The game features 2D shoot ’em up sections, puzzle sections akin to Keep Talking and Nobody Explodes, side-scrolling races that involve quick reflexes and more. Honestly the variety in this game is what really makes it stand out and stops you getting bored. Not only does it keep you on your toes as it flicks between different styles, but it also makes the game feel so refreshing.

It’s not without fault though, some of these sections are clearly designed for a 3 player experience and that does punish solo players. There are examples of this throughout the game, such as the aforementioned shoot ’em up parts. In these each player would have a role; one is steering, and the other 2 have a gun turret each allowing them to split or focus their fire. In single player you have control of all 3, meaning you can only shoot 1 target at a time whilst also trying to focus on not getting shot. It can make some sections feel needlessly frustrating. There are similar examples scattered throughout the game; nothing enough to force a rage quit but enough to stop this game really excelling as a single player experience.

Battletoads looks stunning, quite frankly. There isn’t a moment on screen that doesn’t feel like you’re playing some sort of Saturday morning cartoon. With that though is the subjective art style; this is certainly not for everyone. The angular lines, exaggerated proportions and slightly choppy animation are very well executed but if they don’t appeal you’re really not going to have a good time.

There were no performance concerns though, everything ran silky smooth on an Xbox One X. Visually I knew where everything was too; for example I knew if I was going to connect with my punches or accurately targeting an enemy. This is one of the most important elements in a game like this, any frustration caused by mis-alignment or wonky visuals would stick out like a sore-thumb. Fortunately Battletoads excels here and everything works and feels great.

Much like the visuals, Battletoads audio is clearly inspired by cartoons. With over the top sound effects, voice acting and music that will either grate on you or keep you driven. As a fan of metal music the soundtrack really appealed and helped amp up the action. Not only that but I enjoyed the hammy, over the top characters too. It’s safe to say though the visuals and audio will be the most polarising elements of this game. Of course adopting the cartoon mantra there is also a lot of humour intertwined; comedy of course being one of the most subjective mediums.

Battletoads lasted 4.5 hours for me; I got most of the collectables and was thorough with my exploration. There are 2 difficulties available, one being a more hardcore mode for those wanting the higher challenge. There are 5 collectables hidden on each level as well as a final collectable for achieving a certain criteria; this could be a time limit or a bonus objective. There is also of course 3 player couch co-op; however the lack of online co-op is a heart breaking oversight during lockdown. People will be talking about Battletoads for a long time in speedrunning circles and also it will be a true achievement to 100% the game. It’s these areas where the game will excel and give you hours and hours of extra play time once you’ve finished your initial playthrough.

Battletoads may not be a carbon copy of what came before it and that’s OK. What it does well, it does very well. There are however a few hiccups along the way and some frustrating moments for solo players. All in all for a 5-hour jaunt and the potential to revisit the game for the challenge there is certainly a lot to love. The biggest issue the game faces is with the very polarising audio and visual design. You’re either going to be blown away that you’re playing a cartoon, or you’re going to hate every second of it. Personally I wanted more and didn’t want it to end so soon. I truly hope this is the first of a new series, and we’ll see Battletoads return again for some more crazy action.

I am rewarding Battletoads a silver medal; if it was slightly more focused on the single player experience and also featured online co-op I think it would be pushed into gold medal territory.