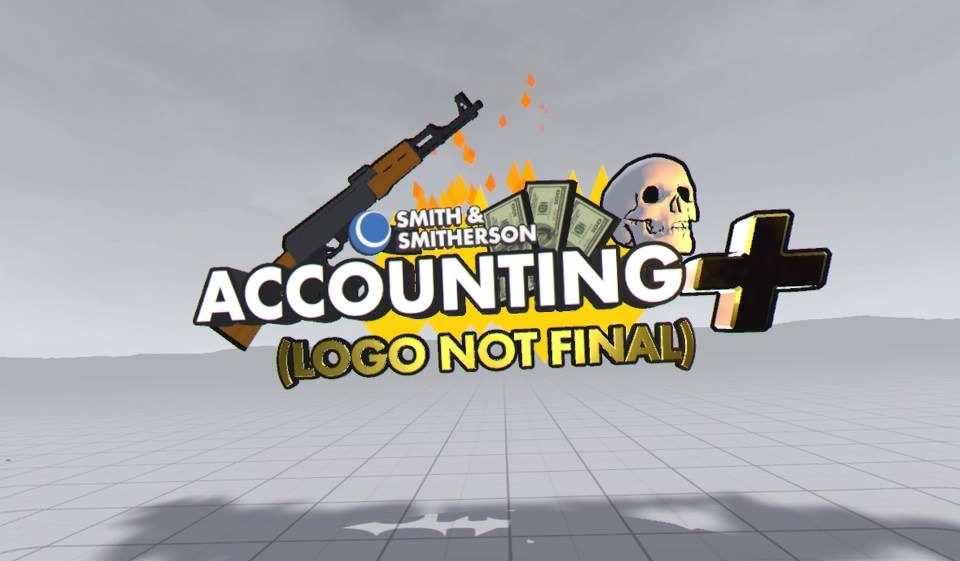 Accounting + is an updated version of the HTC Vive VR game Accounting from Crows Crows Crows & Squanch Games. Squanch Games was founded back in 2016 by Rick and Morty Co-Creator Justin Roiland. The studio was quoted as saying it’s dedicated to creating “Funny, Imaginative and Story-driven VR Content”

When first approaching this title I had read the above information and honestly had no idea what to expect. Having never played the original on the Vive, and never watching Rick & Morty. The questions that instantly came to mind were: Was it a full on VR Game? Was it just a Comedic VR Experience in the style of Rick & Morty?

Let’s see what I found out…

When I first put on the PSVR headset, was greeted by the title screen (as shown above) and saw the ‘Logo Not Final’ title, I was concerned that the game was unfinished and going to be full of glitches and bugs or if it was tongue in cheek humour already being thrown at me (It was closer to the latter).

The game itself is a very unique experience and I’m not really sure I could or should try to explain the ‘story’. Delving into the unknown is very much a part of the experience and the game uses that to try and confuse you (or at least make you feel silly!) on numerous occasions.

The controls here are very basic, it’s as simple as point and click to move, pick up objects and interact, and there is a tutorial before you start to explain, which is only slightly patronising (Congratulations! You turned your head… here is a trophy!)

Something to note, if you are easily offended this game is probably not for you. Character will start hurling abuse while you’re trying to figure out what is required of you in that level.

Now for the main complaint and problem I found with the gameplay. The Control response.

Having owned the PSVR since day 1, and playing a dozen or so games. As well as being quite a way into Skyrim VR currently. I’d like to think I am pretty comfortable with PSVR now. However, here there were times that I couldn’t get the controls to do what I wanted. The motion controllers were out of sync and it felt like I was trying to fight my way out of an invisible box. Even closing the game and re-calibrating it made no difference. There were times I’d pick up an item and it would just drop on the floor behind me.

In my opinion Accounting+ fits somewhere in the middle of the scale in terms of the graphics and overall appearance. It looks nice and has a very specific art style to the game. However, it’s far from perfect. During my two play-throughs I spotted at least half a dozen bugs, where the character animations would freeze while the audio continued. Also, there were situations where the items I wanted to pick up were in a different place visually than where I needed to put the controller to pick them up.

While I didn’t go into this game expecting perfection (the price point tells me it’s a budget type title), I didn’t expect to come across them so frequently and it did spoil the immersion that is vital for a good PSVR title.

Accounting+ impressed me here for the most part, the voice acting was superb and it did give most of the character a unique personality that you could feel instantly. But, like with the Graphics there were situations where the audio would just fall into the background so you could barely hear it (The level where you play the Xylophone was especially bad for this).

The music in the game was mostly atmospheric. Most of the time it’s the characters dialogue that you’re paying attention to, but when it’s there it fits nicely. The 3D aspect works very well to give you the true direction of the sounds (something I’ve found lacks in a lot of PSVR titles).

Is this a game that you will play multiple times? No, it’s definitely more of an experience than a game coming in at around 45 mins per play-through. You can very easily obtain the platinum trophy within 2 hours. There is little to no variation on the gameplay and the humour will start to grind you down. I could honestly say after spending 2 hours obtaining the Platinum, I doubt I’ll pick this title up again for a very long time.

Overall I would say that Accounting+ is a VR Comedic Experience that is worth checking out. Just not at any real expense. It is fun to go through once and see the characters that have been created and the world they are in, especially if you are a Rick & Morty fan. Unfortunately, it will be very much a one and done & doesn’t have any real length to it to sink your teeth into. I feel that Accounting+ deserves the Thumb Culture Bronze Award.