Sausage Party – Some Things Should Never Be

So I recently watched Sausage Party…for those not in the know….Sausage Party is an animated adventure comedy from the mind of Seth Rogen, Jonah Hill and Evan Goldberg.

These are the brilliant minds that brought some of the most outrageous and iconic comedies in recent times, including Pineapple Express, This Is The End and most recently The Night Before.

Sausage Party follows the story of a selection of produce from Shopwell Grocery Store and how they all believe in a special code that see’s them living their lives until its their time to get picked and head into the great beyond. This is obviously rubbish and after a botched trip to the great beyond which see’s Frank (a sausage) end up with his companion bun called Brenda – voiced by Kristen Wiig. The story follows Frank and Brenda trying to get back to their packaging so that they can be picked again and head out to the great beyond.

Things however take a rather dark turn…where the produce find out that they are actually a food source for the people coming into the grocery store and things aren’t quite as rosy. Which culminates in the humans becoming aware that the produce are actually alive and not just a foodstuff for them to snack on.

Without giving too much away this film is crude…rude…lewd…and one scene in particular takes it too far, thankfully its right at the end of the film and it has no bearing on the outcome of the film.

Throughout the film we are treated a large amount of swear words…almost to the point where it seemed that each sentence couldn’t pass by without dropping an expletive.

Seth Rogan seems to have a knack of creating films that both cause a stir and yet usually have some entertainment factor..whilst I don’t regret watching this film I can honestly say that I wont be rushing to watch this one again. 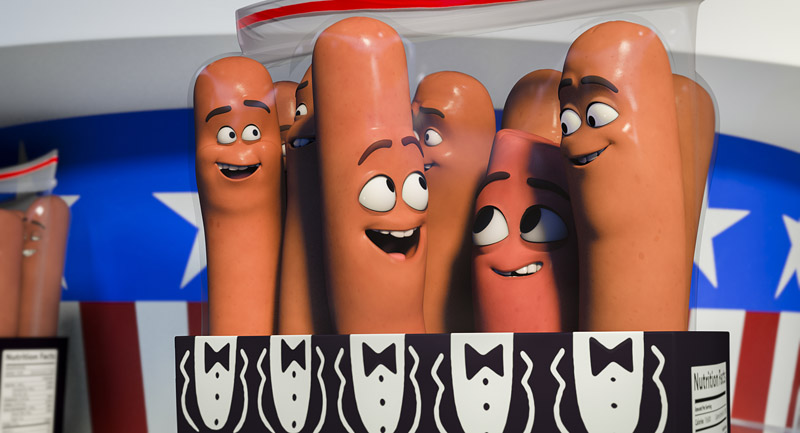 The number of lines that this film can painfully close to crossing was amazing, something of a record, however there was something about the film that will have left a permanent mark on my brain…regardless of whether I want it to or not. In a particular scene we see a Douche who after losing his fluid in a freak shopping kart accident carry out what can only be associated with an oral sex act on an unwilling juice box to get ‘JUICED UP BRO’

Yes I know the entire film is very much tongue in cheek but sometimes things can be taken too far, and Sausage Party is a step too far. Whilst some scenes were entertaining – with Teresa Del Taco (voiced by Salma Hayek) fighting her lesbian urges towards Brenda and Meat Loaf making an appearance as..yes you guessed it…some meatloaf singing in a montage – it was generally too little too late..a few moments of laughter were swiftly erased with the cringing nature of some of the storyline.

This film is a hard one to recommend, if you enjoy the innuendo and the blatant triple X subjects that are mentioned throughout the film then I am sure you will enjoy it. If you were expecting something a bit different then this might not be for you.

Needless to say this simple animation is not child friendly, and don’t watch it with your parents.