Being a citizen of the United Kingdom I can’t say that I have ever gone hunting or know a vast amount about it. I have experienced hunting via the medium of video games mainly via the Far Cry and Red Dead Redemption franchises but that’s about it. Full-on hunting games are few and far between and the genre is a very small niche in the overall video game market. Hunting Simulator 2 is the latest entry into this small genre. Developed by Neopica and published by Nacon it is the imaginatively titled sequel to 2017’s generally well-received Hunting Simulator.   I am very wary of simulation games these days as often they are only really of interest of the enthusiast. However, I am willing to give anything a go (within reason) and am a sucker for a good sniper rifle (virtually of course). So is Hunting Simulator 2 the game to turn a balding middle-aged Englishman into a true hunter-gatherer, read on and find out. 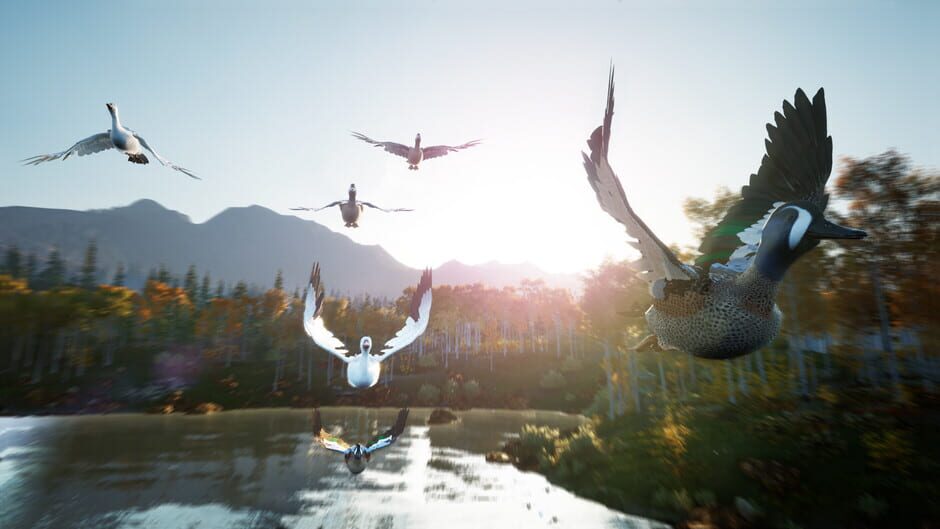 Hunting Simulator 2 is set in three different locations each with two different hunting reserves. The locations are Colorado, Texas and Europe. From forests to meadows and wetlands, each area has the correct animals for the location and environment. There are 33 mammals and birds to hunt and the AI is designed so that they act as they would in the wild. Indeed if you are lucky you will witness the larger animals hunting their smaller prey. This makes both easier to kill but it’s not something I saw very often. The animals go from small birds right up to grizzly bears. Each of the 33 require different tactics and different weapons to hunt. Using the wrong calibre on an animal results in an instant fine so it’s not a case of blasting away at everything with the same gun. Planning is required and this is designed to make the experience as close to a real hunt as possible.

You overall base for the game is the rather plush hunting lodge which seems to have a magic portal to all of the areas.  At the lodge, you can purchase weapons, equipment and hunting aids and there is even a shooting range to try out your new purchases. There are over 160 weapons, accessories and items of clothing from all the well-known hunting brands such as Winchester, Browning and Kryptek. It’s also here that you can choose a canine companion to join you on your hunts. This is a new edition to the Hunting Simulator franchise. You can choose either a Labrador Retriever, a German Short Haired Pointer or a Beagle. Each dog has different skills and attributes. My favourite was the Labrador as not only was he cute he was also able to retrieve game that had fallen into water or other tricky to search areas. I named my Labrador Wilson after my own real-life four-legged friends as they kind of looked alike. There is no option to actually name your dog, I’m just a bit sad! 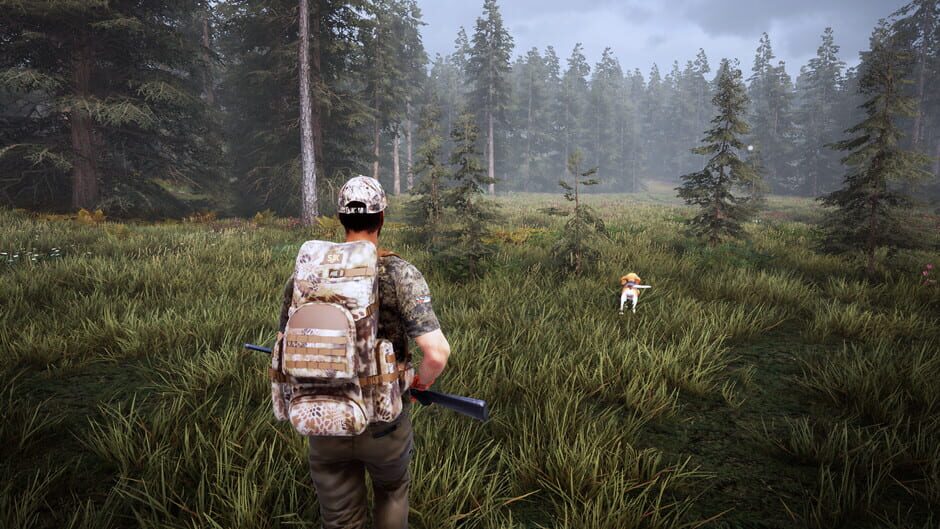 one man and his dog

The initial tutorial pairs you up with a trusty canine companion and takes you through how to track, kill and bag your first animal. It’s a good introduction but doesn’t be fooled that subsequent hunts will be that easy and quick. Tracking alone can take a considerable amount of time and even then if you mistime the shot the animal will leg it most often never to be seen again and you are back to square one. On my first play, I accidentally bypassed the tutorial and made the mistake of spending pretty much all of my credits buying all of the licences for Colorado. This left me with hardly anything with which to buy a weapon. The only thing I could afford was a crossbow. My second mistake was to run around the forest basically crashing through the trees and generally blundering about. This scared off pretty much every animal within a hundred-mile radius and made my initial time with the game dull and frustrating. The correct way to play is to track the animals via their footprints, droppings or other signs of their presence and patiently stalk them until you are in a position to take a shot. Your canine companion can help you track but will need to develop his or her skills. Early on your trusty mutt can be easily distracted by passing butterflies or just simply lose the trail. Practice does eventually make perfect although I found myself to be quicker at tracking than my faithful Lab. However you do it, it takes time and requires a lot of patience.

Hunting Simulator 2 is designed to make the experience as realistic as possible. In that regard you are fined if you kill an animal you don’t have a license for, use the wrong calibre weapon or shoot a female animal. This can be frustrating as it takes time to bag animals to earn credits so any deduction will hinder your progress. With each animal bagged you have the option to sell it for credits or keep it to (I believe) turn into a trophy to display in the lodge. I didn’t exercise the latter option as I wanted to earn more credits to buy a better weapon and get more licenses. The licenses are not unlimited and will need to be renewed when you have reached the limited number of animals allowed per licence. Credits are needed to upgrade all your gear including clothing. You can also buy hunting aids such as animal calls and scent masking sprays. One area where the game is lacking in realism is that wind and distance don’t seem to have any effect whatsoever on your shots. Having played a fair few Sniper games I am quite used to having to take distance and wind speed and direction into account. This simply not appear to be a thing in Hunting Simulator 2 which is a shame.

With the need for different calibre weapons for different animals, you aren’t able to have a multiple loadoutss to cover all eventualities. Hunting cabins act as a mini-hub area where you can change your weapons, refill ammo and claim the animals you have killed. If you don’t claim the animals at the cabin before returning to the hunting lodge you will lose them and not get any credits for them. Each area is a fairly big open-world area. Cabins, tents and various hunting hides are discoverable across the map and enable fast travel. You can also mark the locations of different types of animal on your map to assist you when returning to an area. This ties in with the animals only being found in their correct habitats. This is useful if you don’t have the correct licence at the time as you can mark where the animals are found making it easier when you return to the area with the correct licence.

Hunting Simulator 2 was built using the Unreal 4 engine and therefore you would expect it to look good. The locations are stunning in their own right so you would think they would easily translate digitally however, in all honesty, I found the graphics to be a bit off. Parts of the scenery can be blurry and the draw distance is surprisingly poor. Things tended to pop into existence which was a bit off-putting. My hunter also seemed able to walk through tree trunks both big and small. This was all a little bit disappointing and detracted from the realism Hunting Simulator 2 is obviously striving for. This might just be me but I found the abundance of butterflies to be a bit annoying and distracting and some of them were a little bit out of scale (i.e. massive). I often mistook a butterfly for a bird, especially as they appeared rather large in the sky. There is also an abundance of daisy-like flowers which from a short distance away look like animal tracks. Their presence became annoying when I was looking for my next target. This will sound a bit strange but to me, the whole environment whilst pretty was a bit lifeless despite the plague of butterflies. I suppose however that if it was teeming with huntable animals the game would be rather easy. The lighting effects were very good however and overall the graphics are solid rather than spectacular. 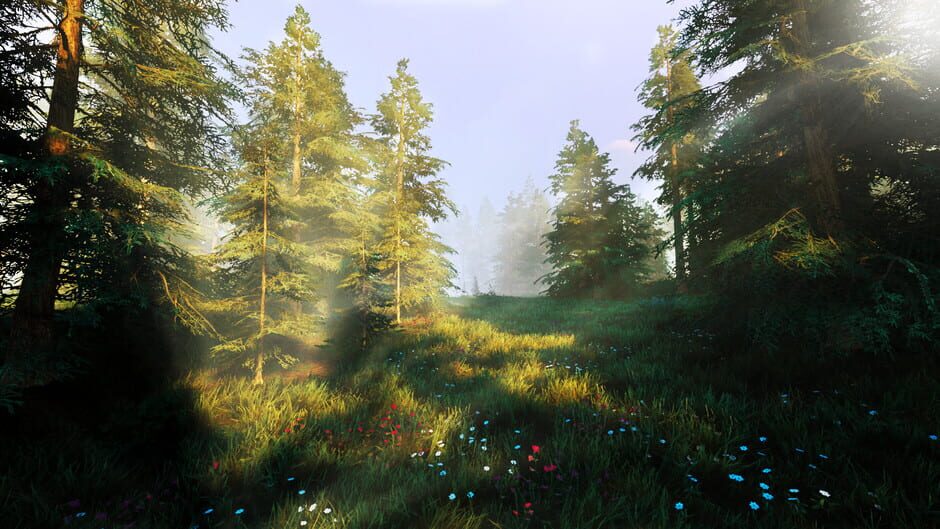 lots of trees but where are the animals!?!

The key to being a successful hunter is the ability to not only keep still but also very quiet. Your character is the strong silent type so the only audio in the game is the sounds of the particular environment you are in. You get the sounds of the birds and insects, the wind through the trees and on some levels the sounds of running water. Sound is mainly utilised in the game as an aid to hunting. When an animal makes a sound or call and a tab appears on the screen showing you what the animal is, which direction it is in and how far away it is. Apart from that, you are left in glorious silence save for the aforementioned background noise and the frustratingly seldom sound of your shot when you finally find an animal and get to fire your weapon. 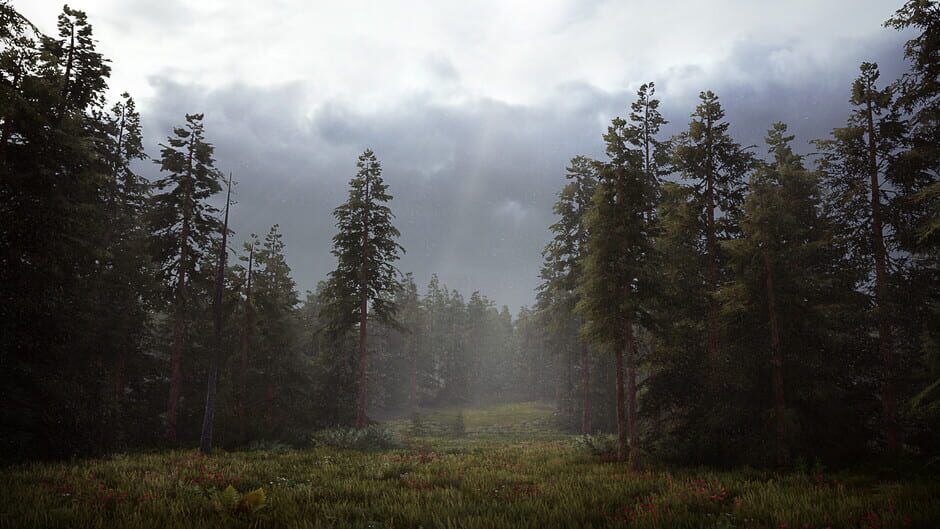 More trees but still not animals!!!

Given the time it takes to successfully hunt each animal you could invest a lot of time in Hunting Simulator 2 however whether you will want to do so is a completely different matter. As I found out to my cost you can’t simply pile in from the start and buy every licence and weapon available. A more steady approach is required. You need to patiently stalk and bag each animal allowing you to buy more gear and licenses to progress and enable you to hunt more animals over the six areas. If you have the patience to do this then you will get a lot of play out of Hunting Simulator 2. If however you are an impatient person like me who immediately wants the best weapon and be able to hunt everything from the start you are unlikely to put the time in. Hunting Simulator 2 is very much for the patient hunting enthusiast rather than the casual trigger happy gamer like myself. 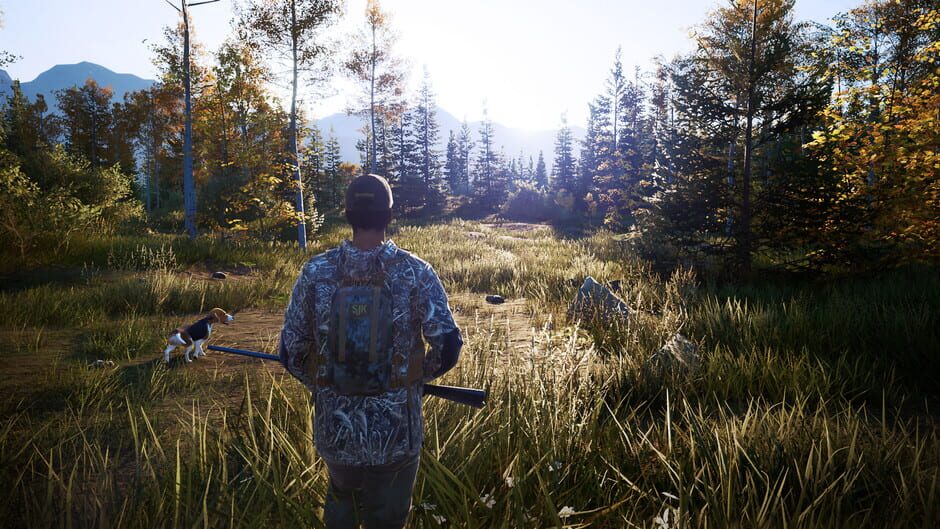 Watch out Beagles about (showing my age!)

Hunting Simulator 2 is definitely one for the hunting enthusiast as opposed to the casual gamer. Being the latter I found it to be a bit boring and frustrating to be honest. I’ll happily stick the hunting in the Far Cry and Red Dead franchises for now however those craving the real thing may well enjoy Hunting Simulator 2.  For the real hunting enthusiast, it may just fall a little short in the realism stakes. If you are willing to put in the time and have the patience then the game will reward you and is worth a look but if you want to be blasting away and bagging lots of different animals in a short space of time then this is not the game for you.

Playing through the Origin Premiere access early week of Anthem I have just one ...

The Church in The Darkness is a game developed by Paranoid Productions and published ...