Painting its way onto PS4 and Xbox One, de Blob 2 by THQ Nordic is the second instalment in the de Blob platformer series and brings with it a new action packed colour adventure.

The evil Comrade Black has returned once more to wage his war on all things colour!  Currently unchallenged, he is hell bent on letting his brainwashed new cult take over Prisma City and remove all colour from the world…that is until de Blob arrives on the scene bringing with him the colour revolution to try and thwart Comrade Black’s despicable plans. 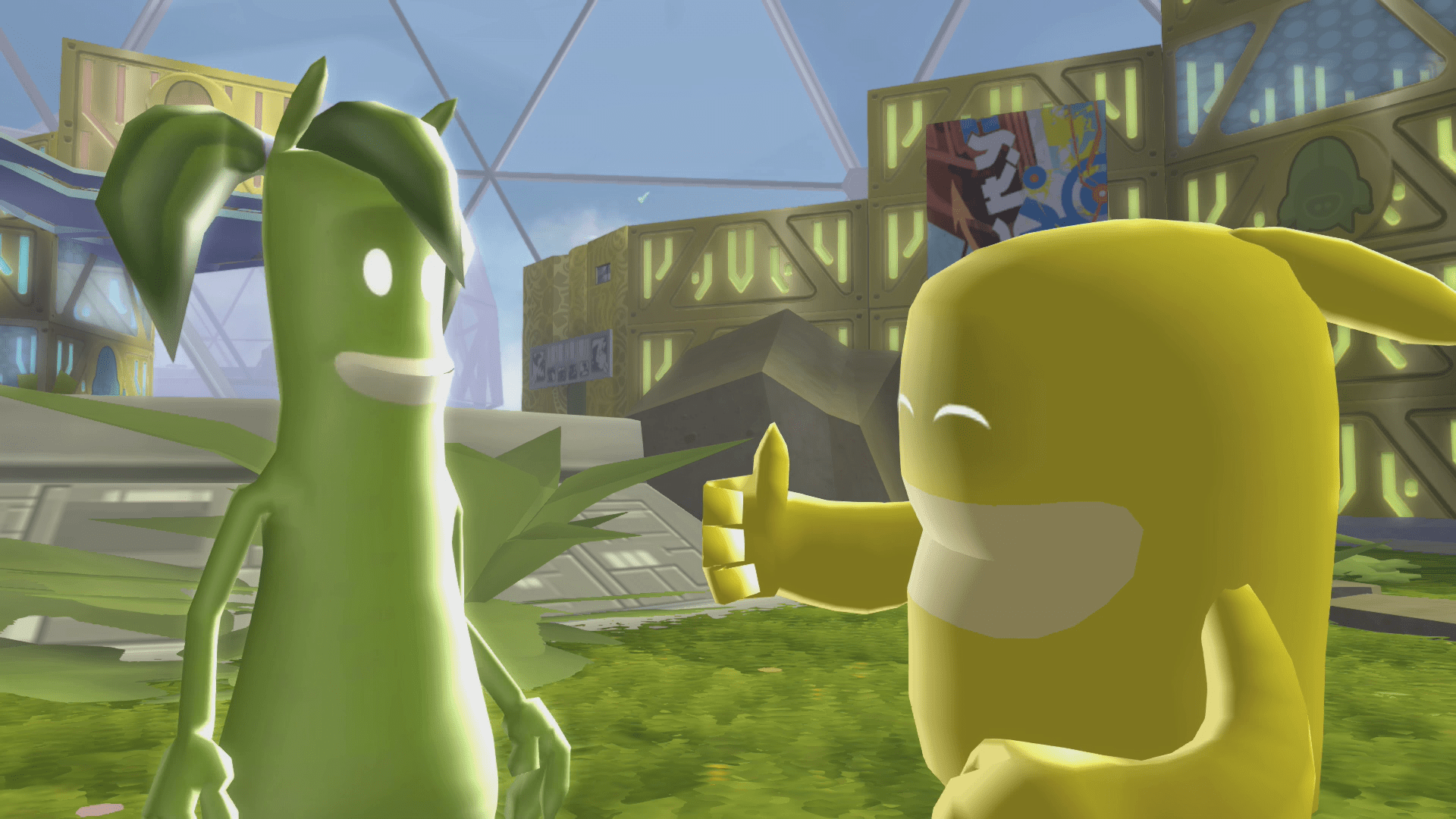 Mutant cucumbers get a big thumbs up here!

From first impressions on loadup, de Blob 2 opens as a bright and colourful game and its cartoon graphics will certainly appeal to the younger audience as well as to your inner child.  My children were quick to ask me if I was watching a Pixar movie!

Jumping straight into the main campaign, which comprises of 12 missions, you are guided by a pink robot called Pinky who explains throughout the first mission the basic controls and objectives of the game.  You are in control of de Blob who is a strange..well..blob like being with legs that rolls around the 3D world absorbing different colour paint from nearby waterfalls and ponds before bouncing onto buildings and slamming down onto tiny little villagers known as Graydians turning them into colour.  Some objects can be painted any colour that you choose while other objects such as buildings can flash the colour that they need to be painted in order to complete the objective.  As you complete each part of the mission, Pinky explains what you need to do next and you are guided by a compass that can be called upon at any time, handy if you are struggling to find either what to do next or where the different coloured pools of paint are located.

While freely jumping around the island the main enemy to begin with is the surrounding water of the island and any pools of black ink.  Touching the water is more annoying if anything as it strips the paint away from you, turning you colourless and causing you to fill up on paint again before you can carry on colouring objects.  The black ink is deadly as it poisons you, you need to rinse off in the water before carrying on.  Later on you meet the Inkies, the foot soldiers of Comrade Black, they can knock the paint out of de Blob but fear not for they can be defeated by a quick slam from above!

When filling up on paint de Blob gets larger and the capacity of paint he is carrying is shown at the top of the screen, initially scored out of 100.  It is important to keep an eye on the paint level as it slowly decreases with each object painted, slam performed or attack from Inkies.  Certain switches require a paint capacity of atleast 80 to be successfully triggered and de Blob’s power-up “charge” requires atleast 60 in the paint tank to begin destroying objects. 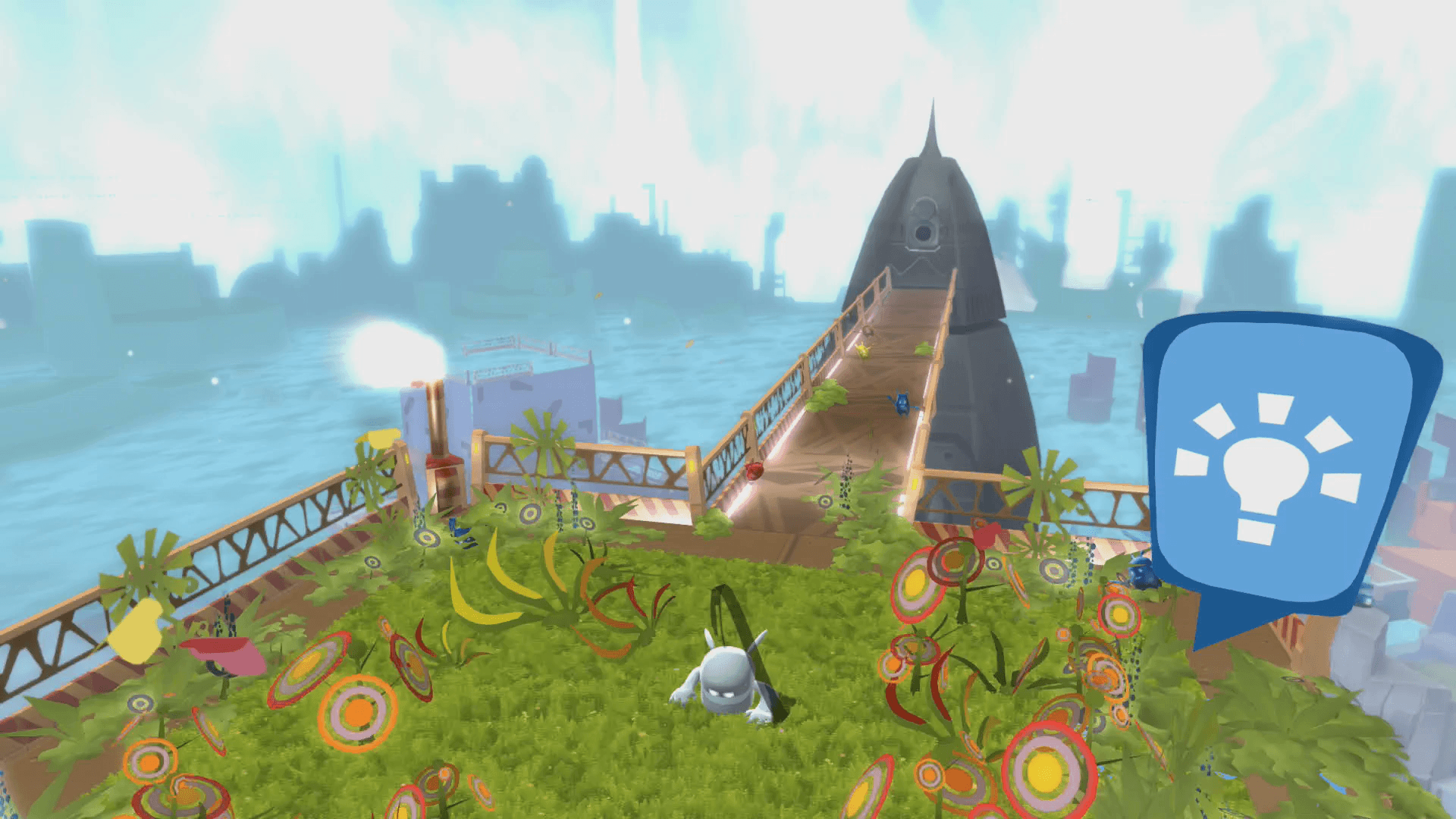 The sandbox style world allows for exploration and adventure.

Once a certain area of buildings has been painted by de Blob, the funky tropical music plays out and some bleached Graydians come out of the building ready to be painted.  A handy targeting system allows you to hold down a trigger button on the controller and rapidly pressing X causing de Blob to quickly paint the little people in a matter of seconds.  The targeting system is also used to jump further distances than you can normally, for example one part of the mission requires you to paint some boats however de Blob can’t use his normal jump to make the distance.  By targeting a Graydian and pressing X, de Blob leaps further allowing you to paint both the little sea monkey and his vessel.

Every so often throughout the mission Pinky will prompt you to activate a Transform Engine which appears to do two things.  Firstly it causes a bridge or platform to raise up between islands so that you can continue your adventure and secondly it gives you white finger syndrome as someone in their infinite wisdom decided that spinning up the vibration motors on the controller to max for not only the duration of the cut scene but also some more after that was a fantastic idea.  It is SO IRRITATING!!!  At first I thought it was just a bug however after several cut-scenes later the same was still happening.  Hopefully one of the devs will eventually notice that they have no life left in their fingers and release a patch.

Vibrations aside, there is a nice variation to the 3D roaming gameplay at certain points within missions that puts de Blob into a sideways scrolling 2D platformer stage as he ventures inside vast caves and buildings within the island that brings with it different challenges and game mechanics.  In these sections of the missions you walk de Blob through a series of corridors and rooms that contain pools of different colour paint that is used to turn on the same coloured switches to open doors and activate other objects.  Remember when I mentioned about keeping an eye on how much paint de Blob was carrying? well here is where it counts.  Traps such as laser beams that shoot from the floor and ceiling at timed intervals serve to shrink de Blob of his paint if they hit you, causing you to turn back and refill on paint once more.  Each puzzle has a simple logic to it however on occasion there is an element of skill involved such as timing jumps from lifts in order to successfully activate a wall switch.  Once each required element of the stage has been achieved then the end goal, activating the transformation engine, triggers a big event such as transforming the entire object that you have entered such as a lighthouse or evil lair into a pretty coloured friendly looking structure, returning the island to the colourful place that it once was …and of course coupled with another dose of mega vibrate on your hands. 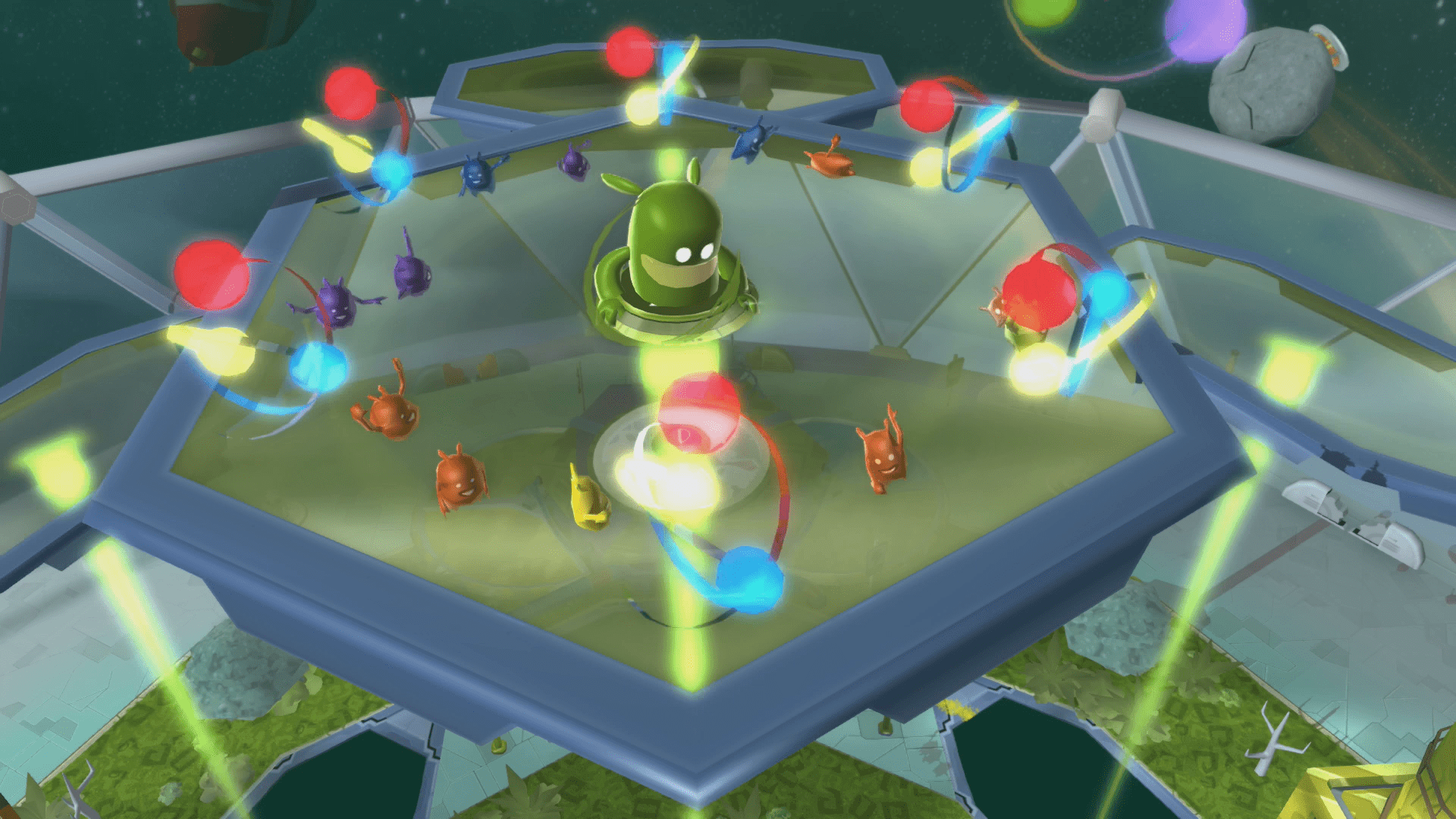 The skies the limit when it comes to grabbing those points!

Mini missions are a plenty and are dotted around the world as a green question mark icon.  By completing the mini missions you can gain extra inspiration and style tokens as well as boosting your score.

Within the 3Dworld aside from the main mission objectives there are many items to collect such as lightbulb icons that give you “inspiration” and purple squiggles known as “styles” which apply cool patterns to the buildings that you paint.  “Inspiration” is the currency used for upgrading de Blob stats although fear not this it is not complicated and is limited to 6 options found within the upgrade menu.  These are; increasing the amount of starting lives, paint capacity, armour as well as reducing the cost of using the charge powerup and  increasing the ammo capacity that player 2 can have when playing as Pinky.

de Blob 2 features co-op play however I found in the main campaign that rather than have player two control a physical blob using split screen, they infact control Pinky who is represented as a reticule dot on the screen and from that they can paint certain objects, similar in a way to Mario Galaxy.  This is all well and good however when we played I found the second player constantly getting frustrated as the main camera view is controlled by the first player therefore it was too difficult for the second player to line up shots.  Being the second player is a bit like when you used to give your younger sibling the broken remote to play with, they felt like they were playing where really you were still in control of the action. 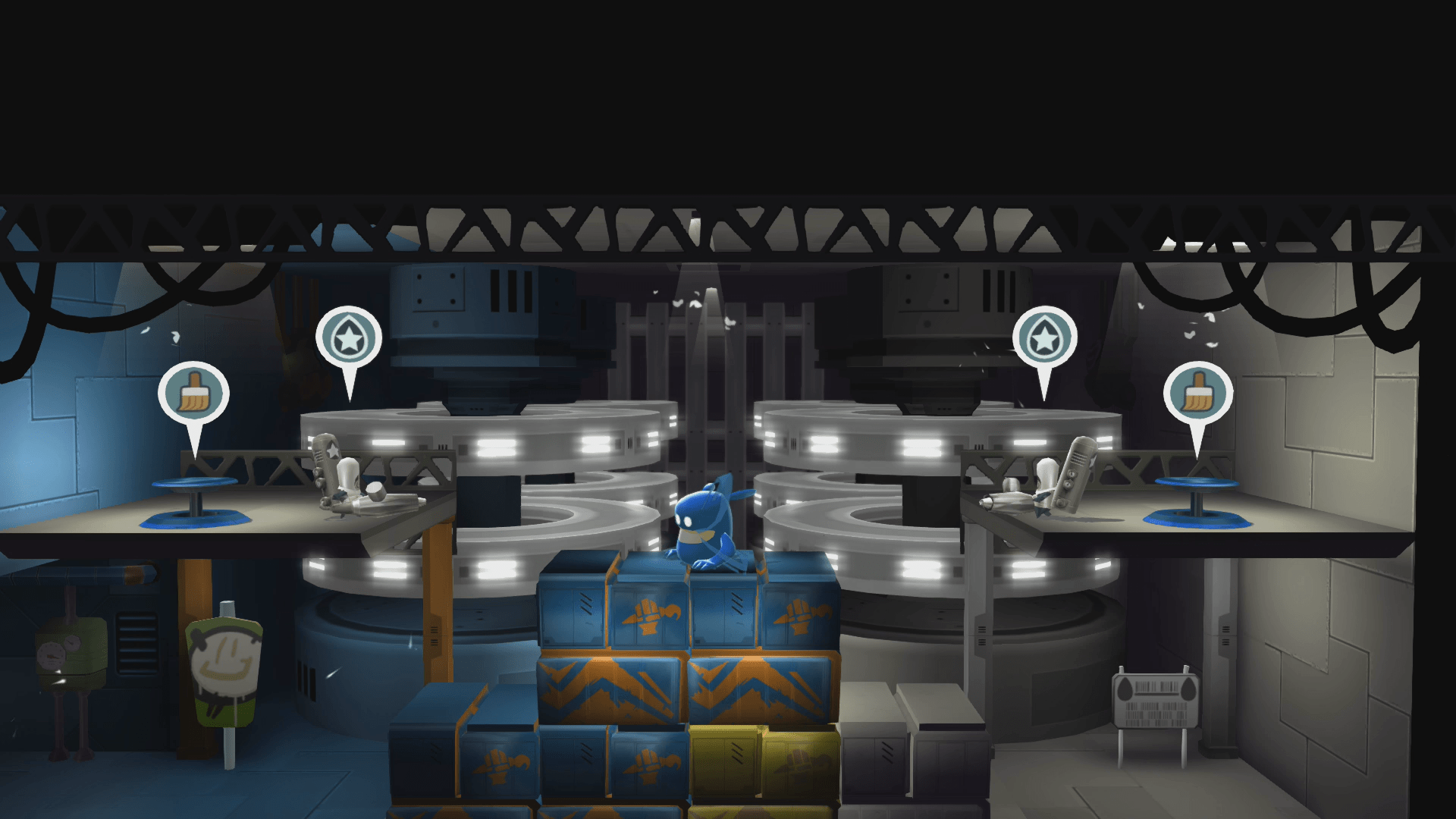 Helpful little icons ensure that everyone can easily understand what to do.

A better display of 2 player co-op is found by selecting the “Blob Party” option from the main menu.  Here you will find 9 timer based levels that unlock as you play through the campaign missions.  The idea of the split screen co-op levels is to see who the best blob is by scoring as many points as you can by being rewarded for completing challenges.  The challenges, similar to the main game, are to paint certain objects such as trees and houses, usually denoted by a paintbrush icon on them or flashing with the colour they need to be painted in.  Once challenges are completed, points need to be collected where dropped onto the land and additional time is added to the timer.  The next round then begins and its a race to be the first to the objective and get scoring those points.  On certain occasions you are required to work together to complete objectives as with the pressure of the timer steadily counting down there are some areas of the level that only unlock after so many completed rounds.  The level is ended by either successfully activating the transform engine or by the timer running out.  The winner is the blob with the highest score.

de Blob 2 is bright, colourful and very appealing to my 6 month old who stared, giggled and coo’d at the screen while watching me play.  The graphics of the world reminded me a little of the Spyro games due to the bounding around chunky green cliff tops to then talk to other characters to obtain challenges.  The animations are lovely and smooth while the cut-scenes are limited to fairly short bursts, helping to keep the attentions of the younger players.  Seriously there’s nothing worse than long story sections when you have kids, they only end up skipping them! 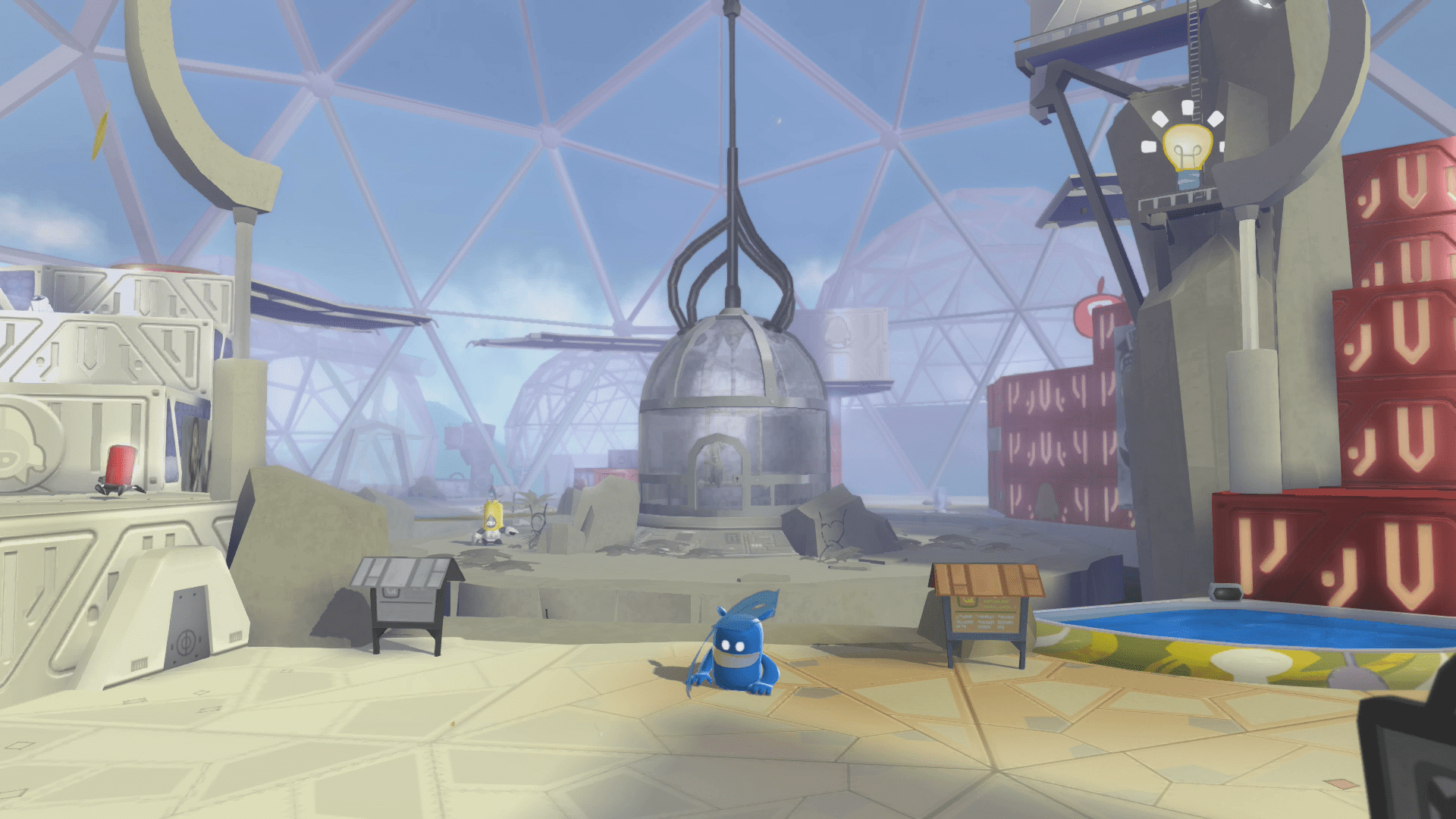 Slamming onto colourful little monsters allows de Blob to become that colour too!

The opening theme song of de Blob 2 is a funky sci-fi action type track that has a very scoobydoo-esque feel to it.  The scene is set for the game nicely and already you are expecting a fun comedy element to the story.  When painting buildings within the game you add to the background music by making tropical sounding chimes and little vocal noises for each completed object.  You can’t help but smile.

When selecting a campaign mission to play, you have the option to say how de Blob is feeling.  The chosen emotion denotes the style of music to play during the game; “Tranquil” brings with it the chilled holiday samba vibes while saying that you are feeling “Intrepid” alters the soundtrack to an upbeat jazzy number that could have easily come from a 1980’s Tom Hanks movie.

Sound effects are clean and chirpy and add to the comedy especially during the cut-scenes where their non language talk comes across similar to that of the Despicable Me Minions.

The main campaign has a lot to it if you decide to take on all the optional side missions and have a proper hunt around each level for all the collectables.  There is a nice variety to the gameplay and the 2D parts of the missions throw a different type of challenge at you although not overly difficult.  de Blob 2 is perfect for younger gamers in that it is fun, well guided as in it explains simply what to do and is colourful.  The “Blob Party” mode brings out the competitive edges of the players while also promoting co-operation in order to complete the level.  Smooth graphics and funky audio brings de Blob 2 to life however the vibration issue is an annoying oversight to what is a fairly well polished game.

de Blob 2 gets its groove on to accept a Gold Thumb Culture trophy for its fun and clever gameplay!

Samurai Riot Is Exploding Onto Steam In September