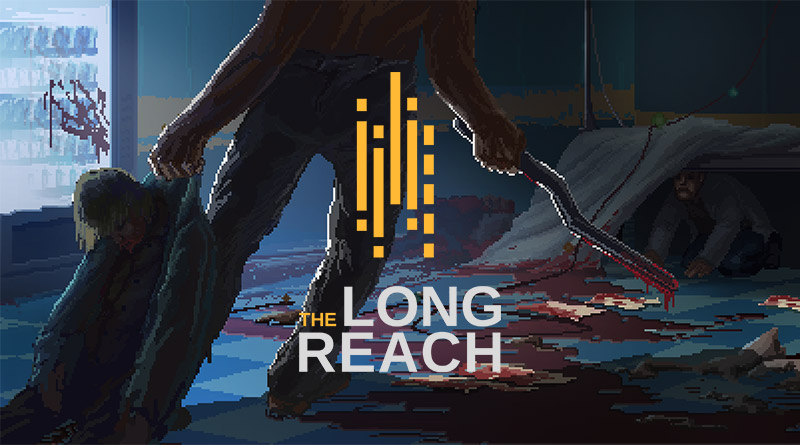 As a child of the 80s/90s I get a nostalgic feeling whenever I see a new game come out that has that retro style to it (as any of you that have read my previous articles will already know). So I was really looking forward to The Long Reach, the latest release from Painted Black Games in association with MergeGames.

The first thing I will say is… THIS GAME IS NOT FOR CHILDREN! Any of you thinking it would be good to give them a taste of how games used to be, walk away now!

In The Long Reach you take on the role of Stewart, a lab tech who works for a facility called ‘General Education Research’. During one of their experiments there is a malfunction and things start to go from bad to worse with our lab tech finding himself stuck in the middle of a hellish environment where nightmares become reality and chaos ensues.

Before starting, I had been perusing the games website (www.thelongreachgame.com) and there were a number of pointers that while sounding obvious, once you’re in the midst of things they are really important:

Did I follow this advice and survive the hellish environment? or succumb to the madness like everyone else. Let’s find out…

The Long Reach has a very simple game mechanic which fits its style perfectly. it’s very much an old school platform puzzle game with a survival horror theme. While in Stewart’s shoes, with the facility on lock-down you have to explore from top to bottom to find all the parts you need to escape (hopefully with your wits intact).

Combat isn’t an option here, you’re not a ‘hero’ or some bigger than life tough guy who can take on anything, so the truth is you need to hide or run away.

For me this is both its biggest positive and its biggest problem at the same time. I really like being the average person who needs to find unique ways to overcome obstacles. But, here they seem too easy to overcome. Everything is pretty much laid ready to go, you just need to lure someone away into another room then go back and pick up what you need. It all felt way too simple.

While simple isn’t always a bad thing, I found it pulled me away from the gaming nostalgia that I had hoped for here. As I’m sure anyone who remembers these types of games when they were all that were available, they were difficult! While they didn’t always look pretty, they made up for it with cruel, hard, punishing levels. Maybe I’m just a better gamer now, but I felt like the ‘chaos’ was more a little bit of an inconvenience.

I don’t want go into too much detail on the story for spoiler reasons, I can say that through the majority of my time I really didn’t find myself overly invested in the story and there were times where I didn’t even understand the reason I was being told I needed to find certain items as they seemed irrelevant – perhaps a little more elaboration throughout would have made this better.

Now this is where I do have to praise the developers, I absolutely loved the style of this game and the pixel art. There were times where I was reminded of Splatterhouse (for those of you that remember it). Plus with the little nods of other 80’s nostalgia in there I found myself paying more attention to how it looked and what little bits I could find in the background instead of focusing on the game itself.

Who ya gonna call?

As I mentioned right at the start of the review, this game is not for children, the gore and adult content in this game is pretty high (think original Evil Dead). But with the pixelated style it never really looks out of place.

The soundtrack for this game is very well done, the music is very atmospheric but still reminiscent of the old 16 bit games, the in game sounds are purely noises, there is no speech or character audio in this game, it may have been a little more enjoyable in my opinion if it did have at least some speech as after an hour or so it becomes very wordy and a bit of a strain to keep reading.

Some of the background noises such as bones crunching and footsteps are all really well done, you can even judge how far someone is away by the sound of the steps.

I would like to say Not Applicable, but I will elaborate, because i’m nice like that… I completed the whole game within 4 hours, because of the puzzle simplicity and mechanic of the game I knew how it was thinking after about 10 mins and as such breezed through large sections at a time.

There aren’t really many trophies to obtain, I picked up all but 1 trophy in my play through, however there is a platinum trophy to be collected for anyone trophy hunters.

The other reason that I feel there is very little replayability in this title is that although you have choices in terms of conversation points, the AI always responds with its set answer regardless. So there really is no point in contemplating what to say.

I really wanted to like The Long Reach, it’s looks and sounds were really appealing to me as an older gamer (not that old Thank-you very much!). But once you strip away those nice pixels and sounds and look at the game itself, I found it to be lacking in substance and was hoping for much more.

That’s not to say it doesn’t have its good points, some of the humour was well placed, and I did enjoy the story itself (once it was finally explained at the end).

Based on this I would have to give The Long Reach the Thumb Culture Bronze award (Sorry Guys!)

Disclaimer: A Code was provided for us to complete this review (Thanks Guys!)

Don’t forget to check out our Social Media pages guys. Be sure to Subscribe/Like/Follow to keep up to date with all the gaming news and reviews: